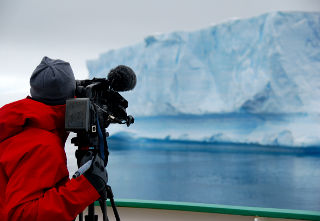 Most people learn about ancestral health through books and blogs, which makes sense—Primal folks tend to be big readers, and the complexity and depth and constant evolution of the knowledge almost requires the written word for proper transmission. But a well-produced, beautiful film with great content has a unique effect on viewers. The combination of video and audio are more convincing than prose to our lizard brains, making documentaries a great vehicle for the introduction of a radically new idea. Skilled creators in the paleo space have taken note, producing some excellent ancestral health documentaries.

And though “ancestral health documentary” is definitely a sub-genre that’s on the smaller side, trends are emerging. Earlier documentaries were celebrations and explorations of (and introductions to) the relatively young lifestyle, intended for individuals hoping to gain control of their own health. Future documentaries are looking at the bigger picture—how ancestral health can help the entire world and the natural environment get healthier. In today’s post, I’ll go through some of the standouts, explain what they offer, look to some upcoming movies, and track the trends.

Pigeonholed by critics as a satirical response to Supersize Me, Fathead begins by disproving the other film’s tendency to infantilize the public and lay the entirety of the blame for the obesity epidemic at the feet of fast food conglomerates. But the real meat of Fathead lies in the second half, when director Tom Naughton skewers the Lipid Hypothesis and low-fat orthodoxy, drawing on interviews with experts like Dr. Mike Eades and running a personal experiment where he loses weight eating nothing but fast food.

Even though it’s not a “paleo” or Primal documentary, it’s a great entry point for beginners to the whole low-carb/high-fat way of eating, especially those skeptical of the scientific underpinnings.

This was the first explicitly paleo film, and it was groundbreaking. Director CJ Hunt lays out the rationale for the paleo diet, going from archaeological digs to human genome labs to Dr. Loren Cordain using a football field to give one of the better paleo analogies I’ve heard on a football field.

Perfect Human Diet is still the best introduction of these concepts I’ve seen on the big screen.

Tim Noakes, the South African professor under constant fire for his heretical views on health and nutrition, guides Donal O’Neill through a month-long low-carb, high-fat, wheat-free, sugar-free, whole foods-based diet to prevent the diabetes and heart disease his genetic history had seemingly ordained for him. I don’t want to give the end away, but the diet doesn’t kill him, doesn’t give him heart disease or diabetes and, in fact, makes him healthier and more resistant to both.

And man, how about that title? “Cereal Killers” is perfect.

Donal O’Neill’s followup to Cereal Killers enlists the help of Dr. Aseem Malhotra, the British cardiologist who made waves several years ago when he came out against refined carbs and vegetable oils. The two travel to Pioppi, Italy—where Ancel Keys discovered a long-lived, healthy population and created the modern notion of the Mediterranean diet to explain it—and find the good doctor may have misinterpreted or overlooked some factors. It’s much higher in fat, for one. Two, there’s way more to the Mediterranean lifestyle than diet.

In The Big Fat Fix, Malhotra and O’Neill dig deeper than Keys, uncovering and exploring all the hidden secrets of the Mediterranean lifestyle, like community, stress, sleep, sun, movement, and, yes, diet.

Millions of people love paleo. To people who follow the lifestyle, the reasons why are obvious. There are many millions more who either haven’t heard of paleo or have some bastardized version of it involving loincloths and luddism in mind. Those are the people who need to hear from people (like me) who love paleo why paleo is so lovable. We Love Paleo (Amazon Prime link, free for members) is precisely that, offering a host of practitioners, chefs, trainers, and other experts explaining why they’re paleo, what it did for them, and what it could do for you.

In the coming months and years, more excellent documentaries will likely come down the pike. I know of at least three upcoming films I’m looking forward to….

Just about every month, it seems like your vegan friend sends you the trailer to some new screed railing against the evils of meat, saturated fat, and animal agriculture. They’ve got the wind at their backs. They’re winning. Most people take their claims as common sense. “Oh, of course meat’s bad for the environment. Doesn’t a cow fart a ton of methane every day and require 100 pounds of grain to produce a pound of meat or something like that?” They won’t win, though. Not if ancestral documentary pioneer CJ Hunt and his upcoming documentary have anything to say about it.

If you want to help nudge Dispelling the Lies past its funding goal and enjoy the trailer, go here.

Even more people love paleo this time around, including me. I make a longer appearance in this one. But that’s not the only reason the movie is being made.

Instead of just telling everyone why paleo will make you healthier, happier, and more productive, WLP2 also explains why animal agriculture doesn’t have to destroy the environment and is probably quite crucial for its continued existence.

Max Lugavere, author of the fantastic (and NY Times bestselling) Genius Foods, is producing a documentary on Alzheimer’s prevention called Bread Head. He immersed himself in the topic for the same reason I got involved in ancestral health and fitness way back in the day: to scratch an itch and address a personal need. Lugavere’s itch was his mom developing cognitive symptoms at age 59 despite no family history of the disease. Perplexed and understandably worried about his own future, Lugavere talked to the leading experts in the field and began to uncover a potential solution to the scourge.

Is Alzheimer’s disease a kind of “type 3 diabetes” of the brain? Could the decisions we make as 20-year-olds in the checkout line have ramifications for our cognitive function 30 years down the line? Check out the teaser trailer, donate to the crowdfunding campaign, and find out!

Kale vs. Cow: The Case for Better Meat

Diana Rodgers is a dietician, organic farmer, and now filmmaker whose upcoming Kale vs. Cow: The Case for Better Meat will represent a huge salvo against the misguided and frankly wrong idea that animal agriculture cannot coexist with a healthy environment. Not only is environmentally-friendly animal agriculture possible to achieve, this movie will argue that we can’t have a healthy environment at all without animals—especially the most vilified ones of all, cattle—in our food system. They’re actually necessary. You just have to do it right.

If you can, watch the trailer and donate a few bucks to help them reach their funding goal.

Are you noticing a trend?

Earlier documentaries were personal and prescriptive, offering a set of dietary guidelines that upended what many people thought was the right way to eat, train, and live. And it worked—paleo has captured the hearts, minds, mouths, and digestive tracts of millions. But many remain resistant, either swayed by the authoritative power of conventional wisdom about the health and environmental effects of animal foods, or unwilling to give that weird fad diet a try. The opposition isn’t letting up, either, releasing cinematic diatribe after cinematic diatribe that only buttress the conventional stance.

These upcoming documentaries are taking the fight to the opposition. They’re facing down the big challenges, the major criticisms and claims that, if taken to their logical conclusion, threaten our access to healthy animal foods. Nothing is more important than that.

Did I miss any? What are your favorite paleo/Primal/ancestral-friendly documentaries?

Thanks for reading, everyone. Take care and be well!