8 Herbs and Spices You (Likely) Aren’t Using—and Should 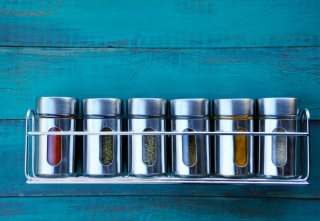 Readers, especially those new to Primal eating, frequently request quick and easy ideas for ancestral cooking. While new recipes may be inspiring, sometimes expanding your kitchen repertoire doesn’t require whole new meals—but new flavors you can infuse into multiple recipes you’ve already mastered. More than just another ingredient to extend the cooking process, herbs and spices are quick, inexpensive additions that can literally transform just about any Primal meal. Parsley and cinnamon need no introduction, but how well acquainted are you with sumac and fenugreek? When was the last time you added lemon balm or Mexican oregano to a recipe?

Here are 8 herbs and spices to add a new burst of flavor to your Primal cooking. They’re easier to use and more versatile than you might think. Most can be found in the spice aisle or produce department of regular grocery stores, but a few might require visiting a specialty market or online shop.

Not quite as aromatic as fenugreek seeds (which have the unmistakable scent of maple syrup) dried fenugreek leaves have a milder flavor that’s slightly sweet and herbal. Dried fenugreek is a secret ingredient that adds mysteriously delicious flavor. Try it in this recipe for lamb meatballs in coconut fenugreek sauce.

Mustard seeds flavor pickles and are ground up to make mustard. The seeds can also add a crunchy burst of spicy, nutty flavor to dishes. Toast the seeds in a skillet with oil or butter for 1 to 2 minutes until the seeds begin to pop, then sprinkle them over a finished dish or salad. Look for either yellow/white seeds (mild) or brown mustard seeds (more pungent).

Pink peppercorns add eye-catching color and warm heat to food. The flavor is often described as fruity, which makes sense since they’re actually dried berries and not true peppercorns. Pink peppercorns are best used in small amounts to add color and a pop of flavor. Pink peppercorns can be eaten whole or crushed with the flat side of a knife; they’re too soft for a pepper grinder.

Note: pink peppercorns may trigger an allergic response in people with allergies to tree nuts.

Use pink peppercorns as a garnish for: salad, meat (especially game), fish, and cream sauces or add to trail mix or fruit salad for a spicy kick

The lemony, minty aroma and flavor of this herb is most often used in tea; just pour hot water over the leaves. Finely chopped lemon balm can also add fresh flavor to salads, chicken and seafood. Lemon balm doesn’t just taste good, it has historically been used to reduce anxiety and lower stress.

Thai basil is similar to sweet basil in flavor, but definitely different. The licorice flavor is more pronounced, and there’s a citrusy flavor in there as well. Predominately used in South Asian dishes, the flavor of Thai basil is best if the basil is served raw or gently wilted, so add it at the very end of cooking.

Which of these do you use (or would like to) in your cooking? Other herbs and spices you’d recommend for Primal dishes—share them below. Thanks for reading today.