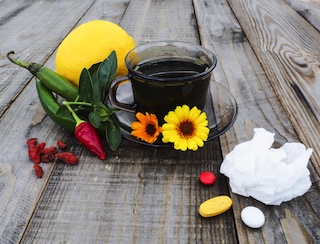 Winter is nearly here, and it’s getting cold out there. We’re staying inside, cloistered together, sharing bodily fluids, and trading germs. The sun is weak, if it’s out at all, our vitamin D levels are shot, and our immune system is suffering. Many of us are traveling in planes, trains, and automobiles tightly packed with other people in the same immune predicament. It’s the perfect breeding ground for the dozens of viruses responsible for upper respiratory tract infections like the common cold and flu.

People have been catching the common cold for millennia. Hop in your Delorean and travel to any time or place and you’ll hear people complaining about runny noses, sore throats, and persistent coughs and see others hawking cures and treatments. Some remedies are pure hogwash. Some aren’t. Today, I’m going to look at a few of the ones that work.

For each remedy, I’ll present the available evidence and any potential or confirmed mechanisms for its effects. None are dangerous, so feel free to give them a shot. Even if they don’t eliminate your cold, you won’t be any worse off for having eating a bunch of garlic or turmeric. What I won’t do is cover the remedies without any corroborating evidence. You can type almost any food into the search bar and Google will offer “cold remedy” up as an option. So, sorry, apple cider vinegar fans. Tough luck, people who stuff onions in their socks at the first hint of a sniffle. While I support your free will, I’m unable to produce any serious evidence that your remedies work.

Ayurveda is the traditional Indian system of medicine. Although talk of chakras and levitating gurus lets rational skeptics dismiss it entirely, modern science has vindicated many Ayurvedic therapies, herbs, and concepts. Golden milk is one, and it’s really simple. Add turmeric to milk and it turns gold. In Ayurveda, golden milk is used to fight sore throats, colds, and flus. Does it work?

Well, turmeric is absolutely rife with potent pharmacological effects. It may be able to relieve cough and clear up excess mucus, at least according to animal studies.

Milk might actually be a bigger aid. Research has shown that a combo of two milk components—whey protein and lactoferrin—is able to reduce the incidence of the common cold in people. That was a concentrated supplement, however. Your standard glass of milk doesn’t have nearly as much whey or lactoferrin. Raw milk may be a better option, as it contains more lactoferrin than pasteurized milk, and raw whey provides more glutathione-boosting effects than heat-treated whey. To preserve these benefits, you’ll have to drink your golden milk unheated, of course.

People call it “Jewish penicillin,” and they’re not lying: evidence has confirmed that chicken soup eases nasal congestion, improves the function of the nasal cilia protecting us from pathogen incursions, and reduces cold symptoms.

Does it have to be chicken? As most cultures include soup in their list of effective cold remedies, I suspect it’s the goodness of the broth that’s important and any true bone broth-based soup will work.

Some people, when ill, swear that spicy food helps them “sweat it out.” Maybe, but a better bet lies in its effect on our nasal cavities. Capsaicin, the chili pepper component that produces a burning sensation in mammalian tissue, reduces nasal inflammation. When your nasal blood vessels are inflamed, the walls constrict; the space gets tighter and you have trouble breathing. Studies indicate that capsaicin is effective against most symptoms of nasal congestion.

Polypodium leucotomos is native to Central and South America, where it’s a folk medicine typically used to treat skin and joint disorders. Modern research indicates polypodium leucotomos may actually be “sunscreen in a pill,” as oral doses protect human skin from UV damage. That’s cool, but it’s not why we’re talking about it today.

A 2012 paper in hard-charging, elite athletes—the type of people who subject their bodies to extreme hardships and often have the perpetual upper respiratory tract infections to prove it—found that a polypodium leucotomos extract reduced the incidence of viral infections by 75%, improved symptoms, and reduced relapses. Fewer colds, milder symptoms, and, after you’ve recovered, a lower chance of getting sick again? Sounds great.

You’re balking. I can tell. But many people don’t realize that Vick’s is essentially just essential oils—of menthol, of camphor, of eucalyptus, of cedar, of nutmeg. That means it’s the latest (and quite possibly greatest) in a long line of natural herbal blends used by humans to clear congestion and improve sleep. It may not “cure” a cold, but few of the remedies mentioned today do. What it does is reduce some of the symptoms and help you get out of your own way so that your immune system can do its job. If you’re not sleeping, you’re not recovering from anything.

I asked a lot of my friends of different ethnicities (Mexican, Filipino, Thai) for some leads on popular folk cold remedies they or their folks might have used, and Vick’s was the one that kept coming up. It just works.

There were a couple close misses that may be hits in the future:

Ginger and just about anything

Vitamin C (till you poop)

This is a tough one. Although I don’t use it for cold relief, prevention, or treatment, there’s the argument that the majority of studies purporting to show inefficacy simply aren’t dosing correctly. Pro-vitamin C researchers argue that attaining the pharmacological benefit for upper respiratory tract infections requires megadosing until the patient reaches bowel tolerance, or that point where you just gotta go.

The foundation for my resistance and response to upper respiratory tract infections isn’t any specific food or supplement, of course. It’s everything. It’s my sleep, my stress, my training, my play. And yes, my food. But it does happen to the best of us, and it’s the worst. We shouldn’t accept being sick. I never do.

I’ve mentioned my common cold medicine: an entire head (yes, a head) of crushed garlic lightly simmered in a mug of bone broth. If I feel a cold coming on, I’ll drop whatever I’m doing and prepare it. This is a potent combination of two of the cold-busting ingredients with the most support in the literature (broth and garlic).

If I have a sore throat, heating up and drinking a blend of lemon juice (lime works too), water, and raw honey in a 4:4:1 ratio always makes me feel better. I tend to use a wild neem honey harvested in India. It’s available at Trader Joe’s and is quite reasonable. I’m not sure if the bees feeding on neem makes a difference, though the plant does possess antiviral and immunomodulatory effects.

What are your cold and flu remedies? How do you stay healthy—or nurse yourself back to health—when a bug’s going around?