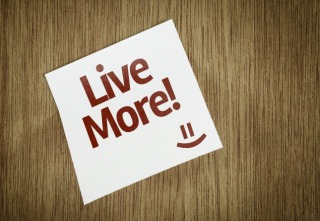 A few weeks ago, I went over 7 of the most important longevity biomarkers to track. Today, I’m shifting gears a bit. The theme remains longevity markers, but the markers I’ll discuss today are subjective, logistical, and psychological ones. A couple involve physical sense but you can’t measure these with a blood draw or a lab scan. The only way to assess your standing is through some genuine self-experiment and honest soul-searching. Or by, in one case, running a mile.

So, as you read through today’s list, keep that in mind. Where do you stand—truly? Do any of these apply to you? Number of years aside, what do you really want your longevity gains to look like, feel like? What changes are you willing to commit to now that will make this a more probable reality—to live longer and live more while doing it? Here are a few markers to start with.

I’ve extolled the virtues of the mile run before. It’s a nice blend of stamina and intensity. It’s over quickly, ideally in less than 10 minutes, so you won’t accumulate the damage associated with longer runs at similar intensities.

And research shows that your mile run time at age 50 is a good barometer for your heart health. Since it’s right around middle age that heart disease becomes a real issue, if you can go into your twilight years with a decent mile run and the confidence that your heart works well, that’s a big advantage.

Pharmaceuticals are getting better. The newest HIV drugs render the virus effectively non-lethal, for example. But we’re probably over-treating our elderly. We don’t need so many drugs, even if they work more reliably with fewer side effects than previous incarnations.

Am I going to say you should cut out the pills? No. Doing so may actually reduce your longevity, especially if they’re prescribed for a good reason. But if you find yourself filling prescription after prescription, perhaps you should take stock of the rest of your lifestyle…because something isn’t right.

Many prescriptions are given because doctors assume their patients won’t assume the responsibility to make lifestyle or dietary changes. This isn’t you. You’re different. Take your list of prescriptions to the next appointment and ask your doc which ones you can try replacing with lifestyle interventions. Maybe I’ll do a post on this subject.

This is a mix of objective and subjective. You can track your strength with PRs and reps, or you can observe how day-to-day life feels. Carrying groceries felt extra tough today? Are the stairs getting harder? Can you still toss your grandkid in the air? We all know when we’re getting weaker. The trick is to admit it to oneself.

What’s important is to be honest about your strength and to never accept its degeneration—because you can actively counter it with proper training, effort, and diet. Countering the loss of strength requires hard work, but it’s doable.

Aim to be one of those virile young Grandpas or Grandmas with an iron grip. You know the type. They look you in the eye as your hand withers in theirs. It’s here that actively countering this trend will prolong your life. Lift heavy things. Carry heavy things with your hands. Take the stairs whenever possible. Make sure you’re getting (more than) enough protein, since our ability to utilize protein degrades as we age. Don’t give up. Don’t give in. Don’t give an inch, or else the agents of aging will seize every opportunity to chip away at your lean mass (and, thus, organ mass).

The Question of Retirement

The effect of retirement on mortality is context-dependent. In men pleased with their post-retirement lifestyle, it increases lifespan. In men dissatisfied with retirement, it decreases it. There are also links between early retirement and dementia, depression, heart attacks, and early death, though they’re riddled with potential confounders (are people with dementia-prone brains unable to stay productive and keep working as long as people with healthy brains?). Still, I think it’s safe to suggest that retirement isn’t always good for a person’s longevity.

Maybe it’s different in more laid-back societies with greater social and familial support. I can see the old Italian paterfamilias going gracefully into old age, retiring on the porch with his glass of homemade chianti, a wedge of pecorino romano, and perhaps a pipe as grandkids scuttle about at his feet. Me, when I think about retiring—which, financially speaking, I could do, I get antsy. I feel my soul slip away and my reason for getting up in the morning dissipating. Relaxation and repose is extremely important to me and to health, but so is having a mission. As lifespan extends so, too, must our engagement with the world.

I’m not saying every 70-year-old needs to start a business or even continue working. Retirement is fine. But if you do, when you do, don’t melt into the couch and gaze at your television. Get a side gig going. Have a hobby. Travel. Learn a skill. Read as much as you can. Be a regular caregiver for your grandkids. Just inject meaning into your life. One guy I know retired from a fairly hum-drum job and started haunting swap meets for old automotive promotional material and classic car tools and parts, which he now sells on eBay. He’d done it as a hobby before retiring, but it’s become a full-fledged side gig. Do something like that.

A Narrowing or Growing Social Network

I once heard a very poignant piece of advice from an old acquaintance. It was a sad moment, a man nearing the end expressing the deepest regret. He said, “Stay in touch with your friends. I didn’t, and just look at me.”

Make that call. Send that text. Reach out on social media. Answer the phone. Attend the reunion. Don’t drift away. Some suggest the only thing in this world a person can count on is that they themselves exist. Or that this is all just a simulation and we’re bits of data being rearranged for the viewing pleasure of the software developer/god. I don’t buy it. And if I’m wrong and I am the only real entity on this plane of existence, that social circle I’m imagining certainly feels real. I reckon I’ll keep in touch.

Not riches. Security. This isn’t necessarily only about savings (although that, too) but maybe about income potential through later years (again, maybe thinking semi-retirement with that passion-fueled gig like I mentioned before).

Worrying about your finances as you head into old age is no way to live long and well. The fact is, financial insolvency is a strong risk factor for early mortality in cancer patients.

Tenor of Your Self-Talk

Sure, “negative” people are at a greater risk of early mortality. But many negative people don’t recognize that they’re negative, making this a difficult marker for people to track in themselves. In their estimation, they’re simply “realistic,” and their comments are honest observations of a dysfunctional and unfair world. Maybe. Or maybe you’re exaggerating. Maybe you’re making the world out to be a den of inequity and injustice because that makes it easier to give up and stop trying. If you can’t beat it, why strive?

A better marker is to observe the tenor of your self-talk. Are you denigrating yourself inside your own head? Are you thinking things that make you feel weak? Do you apply a fatalistic stamp to every new idea or enjoyable possibility that comes to mind?

An example of negative self-talk: “Ah, geez. Where’s my phone again? Looks like I’m getting old!”

If you’re going around grumbling at the world and bemoaning your place in it, your wish may come true sooner than you think.

This is by no means an exhaustive list of subjective longevity markers. These are simply the 7 markers I track in my own life, and I’m still kicking—and happy doing it.