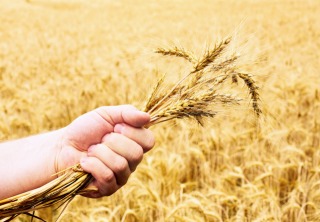 Wheat gets a bad rap in the alternative health sphere, receiving blame from all sides. Today, I’m here to provide the other side. Today, I’m going to give you seven solid reasons to love wheat, ranging from its effects on the environment, its role in the foundation of the American republic, its effect on gut bacteria and your health, its ability to stamp out hatred, its protective role in the lives of Bronze Age Chinese women, and its status as an enduring symbol of human rights and prosperity.

Wheat is a great source of glyphosate.

Just before harvest, many wheat farmers apply glyphosate, the primary ingredient in Monsanto’s blockbuster pesticide Roundup. It kills weeds and most importantly acts as a “harvest aid.”  If you eat conventional wheat, you’re eating Roundup, too (PDF).

Some people call Roundup the safest pesticide around. I’ll go one further and say it’s the most beneficial pesticide. It targets so-called “good bacteria” via the shikimate pathway, which really only cocoon your gut from the harsh realities of the food we eat and render our immune systems completely reliant on their microbial machinations. It’s probably carcinogenic, which really means it’s exposing the weakened, senescent cells in your body beginning to revolt against the host.

A steady intake of Roundup-laden wheat is taking the red pill for your health: It reveals and amplifies the sorry state of your physiological state, and in doing so ultimately strengthens it.

From 5000 to 2900 BC, humans living in Central China subsisted primarily off domesticated pigs, millet, and hunted foods. Stable isotope analyses reveals that both men and women ate similar diets of roughly equal amounts of plant and animal food in this period. Shortly after the introduction of wheat, that changed. Men began deriving a larger share of their caloric intake from animal foods, while women ate fewer animals and far more wheat.

Sure, this may have given rise to a male-dominated social hierarchy that persists to this day, but at least women were getting all the heart healthy whole grains and insoluble fiber found in wheat, and none of the diabetes, cancer, heart disease, and unseemly vitality and physical robustness provided by meat.

Accelerationists claim that the only way to save the world from capitalism—a lamentable ideology that’s robbed billions of the dignity of abject poverty—is to accelerate its ascent and expand its reach until the failures and horror are laid bare. The monocropping of wheat plays a similar role in environmental accelerationism: It speeds up the demise of our environment, erodes our soil health, and destroys our ability to grow food.

Wheat monocropping promotes topsoil degradation. Topsoil is the nutrient-dense portion of the soil where things grow. If we grow too much of the same thing in the same patch of soil without resting or replenishing it, that topsoil erodes. Without topsoil, we can’t grow anything.

Wheat fertilizers frequently run off into waterways, creating unsightly and even dangerous algal blooms and upsetting the balance of nutrients in our natural bodies of water.

Maybe when plants don’t grow anymore we’ll start composting, start rebuilding that topsoil back up. Maybe when the algal blooms stretch for thousands of miles and grow so thick and dense entire seasteading communities establish colonies on them, we’ll rein in the fertilizer overuse. Maybe wheat’s so bad for the environment that it’s good.

Every civilization has its monuments, its grand, usually architectural homages to the transcendent. The Ottomans had the Blue Mosque. The Incans, Macchu Pichu. Egypt, its pyramids. Rhodes, its Colossus. But not America. The foundation of the American republic rests not on the Washington Monument, the Statue of Liberty, nor even the bloody grounds of Gettysburg. When migrants flocked to our shores, they came not for the enumerated freedoms, the economic opportunities. They came to be told exactly how many servings of grains, fruits, vegetables, meat, beans, nuts, dairy, and fats they should be eating. They came for the USDA Food Pyramid.

Without the Pyramid, we wouldn’t have known that meat, nuts, and legumes belong in the same category and possess interchangeable attributes.

Most importantly, without the Pyramid, we wouldn’t have known we’re supposed to eat between 6 and 11 servings of wheat.

There’s a lot of talk these days about the importance of cultural diversity and openness. There’s an almost equal amount of chatter about cultural homogeneity and closed borders. If you believe in the former set of values and reject the latter, you’d better eat some wheat. Why?

Wheat breaks down doors. It topples walls. It, with the help of gluten, initiates the production of zonulin—the molecular messenger which instructs our tight junctions to open and allow passage to all who enter. This may admit some unsavory characters and increase the risk of autoimmune disease, but it’s a small price to pay for enriching your body with the rich and diverse panoply of bacterial endotoxins, protein fragments, and foreign molecules.

Micronutrients can be helpful in certain contexts, but they’re easy to overdo. Too many of the foods we eat are too high in micronutrients. Modern wheat prevents micronutrient overdose by two primary routes.

First, modern wheat itself is lower in nutrient excess. The introduction of dwarf wheat coincided with a reduction in zinc, magnesium, iron, and copper to more moderate levels. Another study found that the “ancient” wheats—emmer, spelt, and einkorn—have higher concentrations of selenium than modern wheat. The moderate-nutrient content dwarf wheat also happens to be higher yield (more evolutionarily successful), so it’s able to outcompete those traditional wheats with excessive nutrient loads.

Second, wheat is high in phytic acid, an anti-nutrient that binds to minerals like calcium, iron, and zinc and prevents you from absorbing and utilizing them. Dwarf wheat is especially good here, as its phytate:mineral ratio is high.

Moderating one’s micronutrient intake is tricky. Wild animals don’t “count magnesium ions,” so why should you be expected to? And even if we do religiously track our vitamin and mineral intake, the references we use for nutrient information vary wildly in accuracy. There’s no way to really know for sure. Eating modern dwarf wheat is an easy, effortless way to ensure we’re not getting too many nutrients.

Wheat exposes the intolerant among us.

Intolerance is a social evil that deserves to be stamped out. But first, we must identify it.

Most food intolerance is silent and subtle. Carb-haters are particularly sneaky. The request to swap out hash browns for berries at the diner. The quick removal of the second corn tortilla at the street taco stand. Wheat’s power is such that the intolerant don’t even try to hide their hate. They blurt it out. Willingly. Why, I’ve overheard bigots so brazen that they openly request that their food be “gluten-free” when ordering in restaurants. They know people can hear them. They want people to hear them. They simply don’t care.

Almost every day, I hear from readers who experience real physical revulsion from wheat. They get headaches, diarrhea, even peripheral nerve pain and other physical symptoms from even incidental exposure to wheat and gluten. They call themselves “celiac,” or “gluten-sensitive,” or “gluten-intolerant,” but we know what they really are, even if we don’t want to admit it. After all, they’re our parents, teachers, colleagues. Maybe I don’t want to admit it because in accepting their patronage I’d be complicit in their hate.

If you don’t know how to incorporate wheat into your life, here are a few easy ideas:

A Ziploc bag full of pastry flour and a straw make a great snack on the go. Start slowly. Don’t inhale.

Gluten balls: Mix a stiff dough, then knead it until it feels like an earlobe. Rest in a bowl of water for an hour. Rinse the earlobe under warm water, squeezing and kneading and later needing it. Once the water runs clear, not white, when you squeeze it, you’ve got pure gluten. Roll into balls and cook or eat directly. I like a little dusting of Roundup powder on mine.

I’m being totally, utterly serious here, folks. Wheat is the solution to, well, almost everything.

That’s it for today. Thanks for being part of the fun. What can I say? Some days I just have to let the sarcasm out to play…. For those interested in the real Primal take on wheat, check out a few of my past posts (1, 2, 3, 4, 5) on the topic. Take care, everybody.