7 Primal Ways to Be a Better Leader 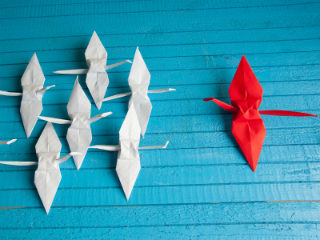 Everywhere you go these days it seems like there’s big talk about leadership. Schools build curricula around it. Businesses feel the need to train their employees in it, including those who aren’t in management roles. Whereas leadership used to be seen primarily as a function, it’s now touted as a virtue. We’re told everybody should want to be one and is, of course, in need of whatever x, y, z leadership program is being sold that day. I guess I see both sides of the coin here. While I think pushing leadership ad nausea demotes other equally valuable skills and roles like the specialist and artisan (among others), I also believe there’s purpose in cultivating a deeper command of one’s own life and in understanding how to bring self-management to bear in leading others.

The thing is, most “rules” you’ll read for improving your leadership skills focus on other people—how to understand them, how to persuade them, how to manage them, how to move them the way you want to go. While modern social organization is a far cry from our hunter-gatherer roots (and at times requires different skills), there’s something essential and timeless in the model of primal era leadership. It’s a case where cutting edge management strategy can add to but not replace enduring principle. See what Primal leadership principles speak to you.

As I often mention, most experts believe that true (i.e. “simple”) hunter-gatherer groups mostly lived in small, egalitarian style bands, which were ever shifting in their memberships at any given time. People moved within and without at will, and generally speaking there was peace between bands. Given the egalitarian organization members actively guarded in their societies and given the immediate return economy (which meant there was little to no food or other resources to be stored or fought over), “supervisory” leadership wasn’t relevant or necessary as we think of it today.

Theirs was, as far as we can know, largely a shared leadership and horizontal social structure. The band’s cohesion wasn’t held together by a central authority but by elaborate kinship codes that guided people’s behavior and served as a template for assessing conflicts. Within this shared value system, communication and consensus ruled.

While all members took responsibility for the band’s solidarity and functionality under this system, there sometimes were hunter-gatherer societies in which a leader was chosen whose authority was very limited—perhaps only to guide the group through a particular situation. Contrary to what the modern mind would think, these weren’t the strongest or boldest members but often the most modest even if they were also people with a particular skill relevant to the occasion.

Over time, certain groups like the Aborigines developed laws of conduct and leadership in the form of sacred stories, which were transmuted by shamans. Rather than directives, they could be cautionary tales. One such example was a story known as the Black Swan, which warned of the use of fear and manipulation with others, the denying of responsibility, indulging in conflict and blame and abandoning others in search of individual gain.

What can we, however, glean from all this? Can we take what research tells us about the roughly prevalent hunter-gatherer model of leadership and decipher lessons for modern management? I tend to think so.

Here are what I’d consider 7 Primal ways to be a better leader….

Humility was a penultimate priority for leadership. At risk was the sacred egalitarian code members carefully guarded for their mutual best interest. These days humility is a rare quality.

The fact is, real confidence isn’t about pomp or aggression. You’ve likely met people in authority who push their agendas, leave no room for discussion or correction and often take everything personally. These people can be miserable to work for, and most of them are probably miserable period.

Real confidence is the outgrowth of humility. It’s about being solid in yourself while also open and discerning toward the gathering of evidence and the voices of others.

Make no mistake. Genuine humility isn’t weak or insecure. It’s rooted in a knowledge of and comfort with one’s self, which is the best security anyone can count on and the most effective leadership quality, since it comes with its own checks and balances.

2. Develop a meditative or mindfulness practice.

Sure, there are health benefits to both, but there’s a different reason behind my suggesting this here. When it comes to leadership (even if it’s just about being a more conscious leader of your own life), a regular meditative or mindfulness practice encourages you to open to and hone your intuition. Bringing regular, perceptive awareness to your feelings—both your emotional reactions and your momentary instincts—will help you tap into the gut sense that can guide your leadership (and life) decisions.

Good leaders might know how to organize and keep the lid on the pot. Great leaders know how to move it all forward and where to direct their actions. They are ruled more by inspiration than order, and that flows from a keen sense of personal intuition.

3. Learn to listen and to sit with feedback.

We’ve all spent time with someone who chronically interrupts and impatiently jostles a conversation with all the darting erraticism of a pinball. (There’s a crucial difference between intensity and impatience.)

In researchers’ accounts of hunter-gatherer societies, decisions were made by consensus and often could take weeks if not months. Members would share a loose thought about the issue at hand and let it settle. On another day a different member might share a consideration. Over time, the collective energy flowed toward a given choice, and it felt natural when the decision was made official.

While most of us don’t operate with the luxury of this kind of time table, we can make the conscious decision to slow down, to invite extended discussion (i.e. more than one occasion) and to truly honor—rather than just ceremoniously entertain—outside views.

4. Accept that it’s not about you.

Related to the above point is the acknowledgment that a leadership position isn’t about your ego (or shouldn’t be). As in Grok’s day, situational or (rarer) ongoing leadership wasn’t ever about the particular individual. Lineage might have had some influence. Special skill, particularly for the immediate circumstance, might have played a role.

That said, leaders were chosen by the collective whole to serve the good of that collective whole. Furthermore, leadership was highly circumscribed, meaning there were significant limitations on the power of that person. “Leadership” was much more diffuse and representational than we consider it today. Whereas we think of supervision and imposition in our leaders now, in Grok’s day a leader’s job was more about support of the traditional process and group interest and not about a personal agenda.

Whose good are you pushing? Is it the good of the organization you’re leading and larger interests—or is it service to the self-image? (Too few seem to ask this relatively obvious question.) It’s where leaders often get sucked into controlling people and outcomes. From there they too often sacrifice the good of the organization and those it reaches as well as their integrity, ironically losing themselves as they take the process in addition to the outcome personally.

5. View your leadership as temporary.

Leadership in hunter-gather groups was often situational (i.e. temporary). In matters where guidance was needed, the person chosen played a restricted role in moving the group through certain circumstances and then promptly and modestly stepped down.

This relates closely to the point above, but it’s worth giving it its own space. When we think of our leadership as temporary (even when we’re talking about something so ongoing and fundamental and leading a family), we appreciate that we’re acting as stewards rather than owners. It’s a different mentality that lends itself to thinking in the best interest of the organization and those involved rather than just one’s self.

Too many people associate leadership with power rather than vision. Power is about control for control’s sake. It encourages imposition and values a few over many. A great leader holds space for the vision and invites others into that space.

Look at organizations where leaders focus on power versus those where leaders lead through vision. (Richard Branson is good example here.) Leaders who literally lead rather than just manage are there in the thick of their business. They’re excited about what they do, and that enthusiasm inspires others.

7. Tap into a core purpose.

Leaders and shamans who didn’t lead per se but often had a separate status in hunter-gatherer groups, were seen as guardians of the sacred stories. While a company doesn’t probably have a sacred story, it should have a core purpose—and a narrative that can stir those who work for that purpose and those to whom it seeks to advertise that purpose.

Offer people rules and queues and directives, and in most cases you’ll get compliance. Offer them a purpose and the chance for investment in that vision, and you’ll often get a deeper commitment and a more interesting contribution.

Thanks for reading, everyone. I’d love to hear your thoughts on Primal views of leadership. Share your comments, and enjoy the end to your week.