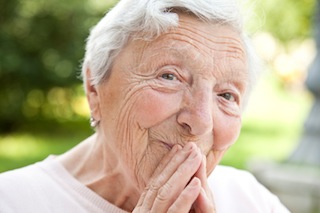 “Oh, that’s just an old wives’ tale” is an easy way to disarm and disregard someone else’s claims about health. But it’s also lazy and, sometimes, just plain misleading. So what if a particular claim comes from folk wisdom? Is it all nonsense? Are all old wives’ tales necessarily incorrect? As you’ll see down below, folk wisdom is sometimes just plain old wisdom. Many of these “stories” have a basis in fact. And many of us would be better off heeding some of these old wives’ tales.

So, which ones are actually couched in real wisdom? Which tales are being borne out by modern research? Let’s find out:

Grandmothers everywhere are fond of telling their extended spawn to “just smile,” no matter how bad they’re feeling. This, grandmothers posit, will help you convert your sadness to happiness. Ridiculous, right? We smile because we’re happy. We frown because we’re sad. The facial expressions are inadvertent responses to emotional states. Smiling is great and all, but it necessarily follows the emotion. Forcing a smile will not force the emotion. Or will it?

There’s actually evidence showing that forcing yourself to smile when you’re feeling particularly frowny can make you feel better despite yourself.

Another study that used chopsticks to force smiles instead of pencils found that smiling during stressful situations can reduce the stress response. Participants who gave genuine smiles had even better stress responses, but the chopstick smilers were far better with stress than those instructed to hold neutral faces.

A spoonful of honey seems to be the “cure” for lots of things, but with loads of powerful narcotics available in the pharmacy, usually over the counter, why bother with bee secretions? These are drugs designed with coughs in mind, whereas honey is meant to feed bees. Surely dextromethorphan (DXM), a powerful antitussive with sedative and dissociative effects, is far more effective than bee food at quelling coughs. Let’s see.

In 2007, buckwheat honey went up against honey-flavored DXM to see which treatment helped kids with terrible nighttime coughs sleep best and cough less. Across the board, honey beat DXM. And in perhaps the most sensitive population around — parents of kids with nighttime coughs who just won’t sleep no matter how many stories you read to them nor how many nonsensical lullabies you cobble together on the spot — honey rated as far more effective than the narcotics.

Honey also beat both DXM and diphenhydramine (DPH) — another popular anti-cough drug — in a 2010 trial, improving the sleep quality of coughing children and their parents.

Most recently, a Cochrane review begrudgingly admitted that honey works better than DPH and about as well as DXM for symptomatic relief of nighttime cough. That’s pretty decent.

3. Chicken soup to cure a cold.

It used to be that a grandma’s immediate response to the onset of a sniffle, cough, sore throat, or other common cold foreshadowing was to brew up a big pot of chicken soup. Sure, it tasted good and there was just something comforting about curling up on the couch with a hot mug of brothy goodness, but was it actually helping our immune systems fight off the cold?

4. An apple a day keeps the doctor away.

Crazy. Apples are just bags of fructose whose sole purpose is to fatten your liver, spike your triglycerides, and give you diabetes. They’re also full of dangerous fiber that feeds the nasties in your gut and gives you gas (and maybe even colon cancer). Why would anyone think that an apple could actually make you healthier, let alone an apple every single day? Surely that’s suicide.

Except that actual research on people who eat actual apples seems to vindicate the old adage.

An apple a day might just keep the oncologist away:

An apple a day might just keep the cardiologist away:

An apple a day might keep the bariatric surgeon away, too. In a mouse model, apple polyphenols prevented diet-induced obesity by reducing fat cell growth and intestinal uptake of glucose while increasing the breakdown of existing fat cells.

An apple a day might keep the doctor away from the prescription pad. In a recent study, adults who ate apples every day were less likely to be taking prescription medicines.

5. When trying to place a bun in your old lady’s oven, avoid hot baths.

While I’m not sure those exact words in that exact order were ever uttered by an old wife, mother, or grandma, the idea that hot baths are bad for male fertility is a common one. It can get really hot down there and your boys are sensitive to heat.  If abnormally constrictive underwear and hot laptops can both heat up the area and impair sperm function, maybe submerging one’s nether regions in hot water can, too. You don’t want to cook your boys, do you?

Sure enough: hot baths are acutely inhibitory of sperm production, motility, and utility. Take a really hot bath and ditch the condoms!

Kidding about that last bit, by the way. You’d need to drink a liter of Mountain Dew for the yellow dye number 5 in addition to taking a hot bath to get reliable male birth control, of course.

6. Don’t go outside without a coat. You’ll catch cold!

Annoying prattle from well-meaning parents or truism that we should all heed?

Well, low body temperature can certainly impair the immune system, opening us up to infections and common colds; a drop in body temperature has been shown to increase a person’s susceptibility to catching a cold. If we’re outside in the cold without adequate protection for long enough to reduce our body temperature, we may very well get sick. A few lines of evidence make me think there’s something to the low body temp/low immunity/cold weather connection.

Going outside in the cold without a coat isn’t a surefire way to catch cold (and cold exposure is good for you in general), but there’s definitely a physiologically-relevant mechanism.

7. I can feel bad weather in my bones.

That old lady with the limp who claims she can predict the weather might be telling the truth because human joints contain sensory nerves called baro-receptors, which are highly attuned to fluctuations in atmospheric pressure, particularly the drops that occur when a rainstorm is about to touch down. It may not be true for everyone, though, as one review concluded that “pain in some individuals is more affected by the weather than others.”

So while it may not be the bones acting as barometers, some folks can definitely feel the weather in their joints.

What did I miss? I’m pretty sure those old wives were telling the truth in other areas, too, so let me hear about it down below!