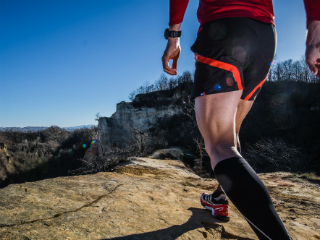 Things have been busy for the Primal Endurance movement since I released the book back in December. People have been eager to learn more about this novel form of training, so we’ve been answering a lot of questions. Much like how The Primal Blueprint received a lot of attention because it bucked against Conventional Wisdom, such has been the case for Primal Endurance. Lots of head scratching, balking, but then, after learning the science and seeing the results, a healthy curiosity or full blown conversion. So what’s Primal Endurance training all about? What are the fundamentals? Who’s practicing it? And where can you learn more about it?

To get the message out as wide as possible, in the wake of the book we created a dedicated Primal Endurance podcast to gather an assortment of captivating guests to talk all things endurance-related. If you’ve tuned in, you’ve probably heard Brad’s series of shows detailing each of the book’s chapters. The book has been very well received and we’ve already commissioned a second printing after selling out the first print run. So why the buzz? I think there are a couple things at play.

First, the endurance community as a whole is waking up to the exciting and scientifically validated concept that a high fat diet might offer performance and health advantages over the traditional high carbohydrate diet.

Part of this shift results largely from work done by the heroic Dr. Timothy Noakes, Ph.D. in South Africa, one of the world’s leading endurance exercise physiologists and author of the epic Lore of Running (944 pages of all you need to know about the physiology of endurance running). A lifelong runner and leading proponent of the carbohydrate/glycogen burning paradigm as it relates to endurance performance, Noakes has bravely second-guessed his life’s work in recent years, prompted by being diagnosed as pre-diabetic despite careful attention to a healthy per-conventional-wisdom grain-based diet and serious lifelong commitment to distance running. He’s taken a bunch of heat from resistant folks stuck in the carbohydrate paradigm, but is making great progress toward evolving the perspective in the scientific community. The South African public is now embracing what Noakes calls the Banting Diet (after a guy in the 1862 who went low-carb and lost weight). You can listen to my talk with him here.

The amazing athletes profiled in our book are also making great progress in shifting the dated philosophy about carbohydrate paradigm endurance training.

A few notable people include:

Ultrarunning legend Timothy Olson (listen to his episode on the podcast here).

National champion 100k man and prolific blogger Zach Bitter (who burns fat at a higher rate than any athlete ever tested, nearly double the limit of what was previously thought humanly possible before Dr. Jeff Volek’s vaunted FASTER Study).

World age group champion triathlete Sami Inkinen (who showed with precise laboratory data that he could improve his “time to bonk” from 5.6 hours to 87 hours in a few short months of primal-aligned eating).

And prominent primal/paleo physician and self-experimenter Dr. Peter Attia, whose scientific insight is paving the way for change.

Second, people are really resonating with my and Brad’s personal story.

As many readers know, Brad and I hail from the endurance sports scene—it’s where we first connected 28 years ago, when I became Brad’s coach during his career on the pro circuit. While assorted endurance training fads have come and gone over the years, certain themes have held steady. Unfortunately, an overly-stressful, overly-regimented chronic approach to training is one of them. Even though Brad and I have been out of the game for a long time, we’ve been stewing on the sidelines, exasperated at how little progress has been made over time with the hot button items like chronic training patterns, overly stressful heart rate zones, recurring illness and injury as routine instead of unusual, high burnout rates, elevated disease risks (including many of our former peers on the racing scene suffering from serious cardiovascular events in later years; here’s my sobering post about it), and finally, excess body fat concerns among endurance athletes despite their many hours of training.

Nearly three years ago now, Brad and I were lamenting the popularity of the latest craze on the endurance scene: the “hacking” of the process of building a base of endurance competency by engaging in high intensity workouts. As in, “why bother with those grueling 20-mile runs when you can do a bunch of box jumps and power home the final six miles of the marathon!” Don’t get me wrong—resistance training can indeed benefit your endurance performance, but it must be carefully integrated into a foundation of aerobic base training to prevent breakdown and burnout.

At the same time, we were seeing some elite and recreational athletes alike experiencing better health and better performance pursuing their endurance goals while honoring the ten laws of the Primal Blueprint. It seemed like a perfect time to leverage the general health and fat burning beast elements of the primal approach and present a comprehensive, revolutionary approach to endurance training that would address the flawed and dated conventional approach successfully. We worked very hard to provide a simple, easy-to-read, but powerful message about how to transform your approach to endurance training, slow down to go faster, have more fun and less stress, and last and often not least, finally lose those final five, 10, or 20 pounds of excess body fat that hang around despite your devotion to training and eating sensibly.

All that said, I want to share with you an excerpt from the book that you might enjoy called the 7 Habits of Highly Effective Endurance Athletes. It gives you a bird’s eye view of what Primal Endurance is all about. It’s a great takeaway for anyone looking to improve their training, whether you’re an endurance athlete or not. But if you want some more of the specifics, read on through the end, since I have an exciting project in the works that may interest you.

Yes, sleep is number one—the next frontier of performance breakthroughs in all sports, especially endurance sports. Your athletic pursuits require you to sleep significantly more than if you weren’t training. Reject conventional wisdom’s “eight hours” recommendation and individualize your approach, honoring these two maxims: minimize artificial light and digital stimulation after dark; and awaken each morning, without an alarm, refreshed and energized. If you are training more, sleep more. If you can’t honor the aforementioned maxims, stop training until you can. If you fall short of optimal sleep one day, take a nap the following day—instead of your workout!

Primal-style endurance training allows you to reach for higher highs (via breakthrough workouts) and observe lower lows (more rest, shorter, easier recovery workouts, and staying below aerobic maximum heart rate at the vast majority of workouts). This approach will appeal to your competitive intensity by allowing you to focus on peak performance and recovery, instead of focusing on the flawed notion of “consistency” in the context of improving fitness through training. Furthermore, realize that virtually all endurance athletes, from novice to elite, do too much training and not enough rest. Consider backing off on both your mileage and your intensity, and integrating more sleep, recovery, and complementary practices into your “training” routine.

Your training schedule is sensible, intuitive, flexible, and even spontaneous instead of regimented and pre-ordained. Respect your daily life circumstances, motivation levels, stress levels, energy levels, immune function, and moods. This means backing off when tired, but also pursuing breakthrough workouts when you feel great! Experimentation is necessary to dial in the best approach that works for you, and entails some trial and error. Also, what worked for you last year may not work in the future, so be open to flexibility. The top priority is to enjoy your program and feel confident that it works well for you.

Endurance success is primarily dependent on aerobic efficiency. Aerobic base building delivers by far your best return on investment, and is best achieved by strictly limiting heart rate to aerobic max or lower during defined aerobic workouts and training periods. Stay out of the black hole (sustained cardio workouts at heart rates above the “180-age” max aerobic calculation), and don’t venture into high-intensity training blocks before you have a strong base.

Intensity can deliver exceptional results for endurance athletes, when a strong base is present, when workouts are brief in duration and really intense, when they are conducted only when you are highly motivated and energized, and during defined periods that are short in duration and always followed by a rest period and preceded by an aerobic period.

Increased general daily movement, spontaneous, unstructured play sessions, mobility work such as technique drills and dynamic stretching, movement practices like yoga and Pilates, and high-intensity strength training are essential for success, because we live sedentary lives of extreme physical ease. Remember, in endurance competitions, you have to “endure.” Cranking out your daily hour-long workout and then sitting at a desk, in a car, and on a couch the rest of the day is not preparing you to endure anything except perhaps a beatdown on the race course at the hands of a more all-around active human. Expand your perspective to embrace total fitness and an active, energetic lifestyle.

An annual program always commences with an aerobic base period (minimum eight weeks). With success, high-intensity periods can follow—a few weeks is plenty before taking a bit of rest, a bit of aerobic base rebuilding, and then a return to a brief intensity/competition period. The annual training calendar program always ends with an extended rest/off-season period. The new calendar starts with an extended aerobic base period. This general overview offers plenty of flexibility, but you have to respect the need to engage in blocks of specific training focus as an immutable law of endurance training.

Well, there you go!

Even if you’re not a big time endurance athlete, these tips can help you navigate the challenge of balancing hectic modern life and ambitious fitness goals.

I hope you enjoyed this glimpse of the Primal Endurance philosophy.

Grab the book in print, digital, or audio format (audio listeners get the added benefit of Brad’s humorous ad-libbing) and subscribe to the podcast to go deeper.

And if you’re really interested in taking things to the next level, we are developing a comprehensive multimedia online education course to bring the Primal Endurance book to life. It’ll be there to help endurance folks more deeply understand and implement the training and lifestyle principles with the help of world-leading experts on specific topics.

I’ll keep you updated as we aspire to trend further in the direction of multimedia with Primal Blueprint Publishing.

But in the meantime, you can sign up here to stay tuned.

Thanks for reading, everyone. What’s your experience with training after going Primal? If you’ve already purchased a copy of Primal Endurance, any questions contained within I can help answer?

New and Noteworthy: What I Read This Week—Edition 174