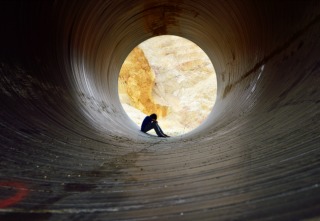 As I discussed last month, depression is the yin to anxiety’s yang. Between these two troublemakers, they’ve got dark clouds hanging over both the past and the future, making the present moment complicated at best (and for some people unbearable). Taken as a human composite, it’s an unfortunate trade-off for being cognitively complex. As individuals, however, we naturally just want a solution.

The problem is, there’s just so many confounding factors surrounding depression that it’s hard to know where to start. Your mind is an infinitely complex latticework of moving parts; one which continues to baffle and divide the scientific community. How does a practitioner prescribe suitable treatments for a problem they don’t fully comprehend? And, yet, medical science often (and perhaps inevitably) works with incomplete information.

The result is a suite of antidepressant drugs that may be effective in treating certain aspects of depression in certain people, but which also present a suite of their own often-debilitating problems. It doesn’t mean these approaches don’t have their value. I recognize that for some, these medications may be live saving or sustaining. For others, they offer support through acute or overwhelming times or, in still other cases, give a leg up while other interventions have the chance to take hold. My purpose here isn’t to suggest people give these drugs and other conventional treatments the boot. I see this post as a dialogue that offers supplementary strategies to augment any assigned treatment. It can hopefully be or contribute to a toolbox that moves beyond the scope of simple self-care into research-supported territory. And while they’re likely more effective for mild to moderate depression, I think it’s fair to say that no one should write off the therapeutic benefits of healthy lifestyle measures for their overall treatment program.

In that spirit, let me offer the genuine caveat: any folks under medical care for any condition (depression or otherwise) should consult their medical professional before making any change in their treatment plan. But you knew that already.

There’s definitely some dead horse flogging here, but if I’ve said it once I’ve said it a thousand times: exercise is a must for rebalancing mental health. Last week, I discussed how the “feel good” hormone serotonin, a sworn enemy of depression, can be increased via exercise. This is achieved by motor neurons promoting the synthesis and release of serotonin, and by encouraging production of tryptophan, a precursor to serotonin.

All well and good, but which exercise is best for fighting depression? Older thinking has always privileged aerobic exercise when it comes to mental health. This study, for example, notes that “BDNF (brain-derived neurotrophic factor) by aerobic exercise appears to ameliorate hippocampal atrophy, improve memory function, and reduce depression.”

But while a good bout of cardio is certainly beneficial for elevating mood, studies that examine a range of exercise forms suggest that certain types may be better. An experiment that investigated the effects of aerobics, bodybuilding, and circuit training on 45 depressed patients showed that bodybuilding was the clear winner in reducing depressive symptoms. Another study that compared the effects of aerobic and non-aerobic (i.e. resistance training) exercise on depression found that while both forms were beneficial, non-aerobic exercise was superior in all-round mood-lifting effects.

Personally, I’m all about lifting heaving things, but for a broad-spectrum approach check out this post.

I’d be inclined to say that any meditation form will help in the depression realm, but this time we’re all about facts. And those facts lead us straight to the mindfulness doorstep. Not one to pass on a good thing, I’ve written at length about mindfulness and the way in which it encourages both a healthy mindset and a healthy body.

As this paper puts it, mindfulness is “a practice of learning to focus attention on moment-by-moment experience with an attitude of curiosity, openness, and acceptance.” It’s that conscious and continual awareness of both the pattern and nature of our thoughts that diminishes ruminative thinking, one of the key characteristics within depression.

In the lab, applications of mindfulness-based stress reduction and mindfulness-based cognitive therapy have both been put to good effect for decreasing psychological distress and offering both broad spectrum anti-depressive and anti-anxiety effects. Likewise, outside of the clinic, plenty of studies have proven the ability of mindfulness meditation to treat depression, particularly in those with severe emotional difficulties. Another benefit that can’t be dismissed is the fact that mindfulness meditation seems to be longer-lasting than many other antidepressant therapies.

For those interested in instituting a practice, here are a few easy steps for introducing meditation into your life.

It’s an obvious lead from meditation is yoga, which itself can be a form of meditation. While it’s fair to say that there’s a notable lack of large studies examining the link between yoga and depression, existing research is already substantiating favorable anecdotal evidence.

In the first study performed in the U.S. to look at yoga as a standalone treatment for depression (notable that it was published just a few months ago), 20 adults with mild to moderate depression were randomly assigned to 90-minute yoga classes twice a week for 8 weeks. Another 18 adults with mild to moderate depression spent the same amount of time in attention-control educational classes, sans-action. The yoga group showed significantly greater remission of their depressive disorders than the control group.

Other studies have supported the use of yoga as an enhancement to traditional talk therapy and as a pivotal embodiment therapy (PDF) for overcoming trauma and the psychological symptoms (including depression) related to it.

Now we move into murky waters…literally. While it’s fair to say that the use of water treatments for various ailments goes way back, it’s not until recently that using hydrotherapy for treating mental illness has raised a few brows once more. This form of treatment can utilize hydrological variations to produce a range of beneficial effects in the body.

It’s not exactly rocket science, when you think about it. If you’re like me, you love a good plunge in a polar pool. That feeling you get afterwards, once you get over the initial shock, is one of clarity and invigoration. This suggests, then, that bringing our skin into contact with water of varying temperatures can change both our physiology and mood. In the case of cold water immersion, for example, restriction of the surface blood vessels forces blood into the core in an attempt to conserve heat. This sends a jet of oxygen-rich and nutrient-dense red stuff to the brain and vital organs, the beneficial effect of which is almost instantaneous.

But for our humble Primal readers out there, a daily polar plunge might not always be a viable (or desirable) option. Fortunately, preliminary evidence suggests that a simple cold shower may also provide a notable antidepressant effect. While research is only in the preliminary stage, this study suggests that easing your shower temp down to 20°C (68 fahrenheit) and sticking it out for 2-3 minutes is a good starting point. If nothing else, it’ll wake you up.

At the other end of the spectrum, it’s possible that hot water may perform a similar anti-depressive function. The most notable of hydrotherapies in this arena is balneotherapy—the use of hot water baths for healing. A 2010 study that compared 21 days of balneotherapy to standard antidepressant medications found that the former resulted in significantly higher remission of depression and was longer sustained.

Another study showed that hot mineral water treatments improved serotonin levels and had a positive effect on depression. That being said, with both these articles its hard to say whether it was the mineral component that provided the beneficial effect, or the hot water component. I’m inclined to think both.

And I’m talking about quite a lot of heat here. A study published last year used a whole-body hyperthermic device to raise the body temp of 338 individuals to 38.5 Celsius (101 Fahrenheit) over the course of 6 weeks. Using a control group who were tricked into thinking they were also experiencing a rise in temp, the researchers were able to confirm that whole-body hyperthermia is a “safe, rapid-acting, antidepressant modality with a prolonged therapeutic benefit.”

Another study published in 2013 used whole-body hyperthermia to produce much the same result. But while it appears that there were statistical errors, there’s enough emerging evidence out there to suggest that this treatment is worth giving a shot. Those of us outside the laboratory might try a traditional or (even better perhaps) an infrared sauna. A hot bath or longer hot shower may also work for this purpose.

Curcumin is known for its anti-inflammatory prowess, meaning its currently a preferential natural treatment for any number of arthritic and autoimmune conditions. But what about mental health?

Current thinking in the scientific community largely posits depression as an affliction of both the central nervous system and systemic inflammation, meaning any reduction in system inflammation via, say, curcumin supplementation, can potentially impact depression. And while initial trials demonstrated no positive correlation between curcumin and depression, those same studies admitted that they needed a longer duration and higher dosages. Later stints that did just that found some promising signs, but once again concluded that they needed still higher dosages and larger cohorts. See a trend emerging here?

Finally, this year, researchers had a breakthrough: significantly greater improvements in depressive symptoms from curcumin supplementation than placebo. Interestingly, however, they didn’t find any difference in effectiveness between low and high curcumin dosages.

Next, while something called eye movement desensitization and reprocessing (EMDR) has attained mainstream status for the treatment of post-traumatic stress disorders, it’s not until recently that this same treatment has been applied to depression. A 2015 study published in the Journal of Brain and Behavior recognized that “trauma and other adverse life experiences can be the basis of depression,” and on this basis sought to determine whether EMDR could be an effective antidepressant.

Sixteen patients with depressive episodes were treated with EMDR therapy by reprocessing memories of stressful life events, while continuing the use of standard antidepressant drugs. The results showed that more than two-thirds of the EMDR patients showed full remission at the end of treatment, which was a significantly greater reduction in depression than a control group that was treated with antidepressants alone. What’s more, one year later the EMDR group reported less depressive symptoms and relapses than the control group.

While more research and larger study groups are needed to clarify the link between EMDR and depression, it’s an area that shows some promise, particularly for trauma-related depression.

Thanks for reading, everyone. Have your or anyone you know had success with any of the above therapies, or with something else I haven’t covered today? Share your thoughts below, and have a good end to the week.