50 Pounds Lighter and in the Best Shape of My Life!

I wanted to write this because of how motivating and uplifting the Friday success stories have been for me over the past year-and-a-half! I come to you a new man – 50+ lbs lighter and in the best shape of my life, free from the debilitating back pain and restless sleep caused by years of the standard American diet (SAD) and neglected physical fitness. More importantly, I am now able to carry my six year-old daughter long distances in a variety of orientations: on my back, in one arm, on my shoulders, upside down by her ankles, etc…

I was born in central Illinois – the land of corn, soybeans, and boiled-to-death vegetables. I grew up active (mainly swimming) and reasonably healthy, despite a short bout with pudginess in 6th grade. When I moved to California for grad school, I embraced the conventional wisdom and ate “healthy,” lifted weights 5-6 times per week, and played basketball occasionally. I worked myself into pretty decent shape, but never quite managed to get the six-pack. As my grad research gained traction and my workout buddies graduated, I fell out of the habit of exercising regularly and my eating deteriorated. The stress of postdoc’ing (i.e. academic purgatory) and the tenure track (i.e. academic purgatory part II) ensured that this trend continued unabated for nearly a decade. 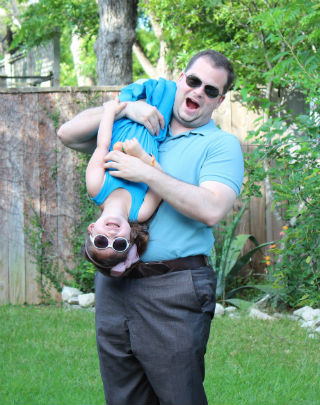 I was 225-230 lbs (I’m almost 6’ tall) by the time I hit my mid-30’s and my muscles had atrophied to nearly nothing. But I had gotten tenure, so all was well!!! Or so I thought… I learned that my sleep had deteriorated as I had developed a touch of obstructive sleep apnea, along with borderline hypertension (~140/90). This scared me as I had watched my mom’s blood pressure creep up until she eventually suffered a debilitating stroke, though not enough to do much about it, other than half-hearted attempts to “eat less and exercise more.” Besides, I was a big fan of pizza and donuts and everyone puts on weight as they get older.

My eureka moment was when my lower back locked up coming back from a trip to DC in mid-December 2012. Those lousy conference room chairs, right? After being up-and-down through the holidays with excruciating sciatica, it became clear that I wouldn’t be able to stretch my way out of this and my wife insisted that I visit an orthopedic surgeon. One MRI later and I had both diagnosis and prescription: “your spine is fine, but you are fat – lose weight and get yourself a good chiropractor.” I took this to heart and accomplished the latter (Dr. Robert Schmidt!), but struggled with the former. Low-fat foods and whole grains just left me hungry, tired, and surly.

I found Alton Brown’s fantastic “Live and let diet” episode and started to follow his regimen; the weight started to come off slowly. I also started to workout with a trainer, initially doing mainly calisthenics and core strengthening to ease my (still debilitating) back pain. Then I found Dr. Robert Lustig’s incredible talk “Sugar: The bitter truth” on YouTube, which drove home that my daily 32 oz. Gatorade was not doing me any favors (I live in Austin, TX and it gets pretty hot, so hydration is essential). I cut back on added sugar and things got a bit better, though my back pain would still come and go.

Two things happened around December 2013: (1) my weight hit ~200 lbs and sleep began to be restorative again, and (2) I found MDA and everything changed! As a scientist, I loved the human development arguments for a Primal way of eating and Mark’s love of nuance and self-experimentation, though I was somewhat skeptical given how it was “well-established” in the literature that saturated fat and cholesterol are terrible for you! Regardless, I decided to give it a go – even if I wouldn’t eat this way long-term, it would at least help me get healthy in the short term.

What did my N=1 experiment look like? While mainly Primal, I still ate some beans, lentils, rice, and the occasional pizza (though only a couple slices and always with a salad). The only thing I cut out completely was highly-processed garbage, including my much beloved donuts! Gradually, I found that Mark’s recommendation about moving down the carb curve was spot-on. Up until this point, losing weight had been a miserable slog. After going Primal-ish, the weight came off steadily at about 1 lb./week (see chart) and was largely effortless/painless after the first couple of pounds. 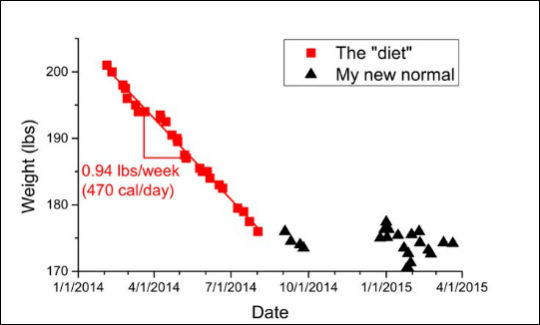 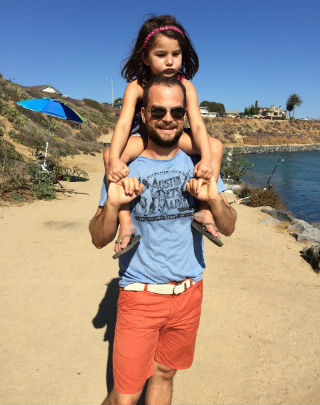 I’ve now been ~175 lbs since June 2014 and have focused on gradually improving my strength, flexibility, and body composition. My back pain is (thankfully) a distant memory, sleep is fantastic, and blood pressure is less than 110/80. The side benefits are many: I feel satiated, my energy level does not ebb and flow like before, colds tend to be rare and short-lived, I experience virtually no digestive issues, and I no longer feel like I’m declining with age. The only downside is that I’ve run into a couple of sticky situations at the airport when TSA was reluctant to let me through security because I didn’t look like the fat guy on my driver license!

Currently, my carb intake is probably 50-100g/day – mainly some berries in my morning smoothie, maybe a side of rice or similar at lunch, and some fruit with dinner. The balance of my intake is simply prepared vegetables and meats/eggs from the farmer’s market, as well as some nuts. I consume virtually zero dairy, except for (pastured) half-and-half in my coffee and Kerrygold butter.

I find that segregating sweet, savory, and carby into separate dishes helps greatly with portion control. My wife and I have a stable of five-ingredient/five-minute meals, which makes things practical, and I’m constantly fermenting foods to keep the gut biome happy and healthy. I embrace the principle of maximizing nutrient diversity, including eating the whole animal – lots of bone broth, roasted marrow bones, fish head soup, canned sprats, offal, etc. My daughter loves these simple dishes, so it’s been great for daddy-daughter bonding as well.

Thanks to Mark and MDA – I look forward to reading more success stories!!!