5 Ways to Get the Most Bang for Your Workout Buck 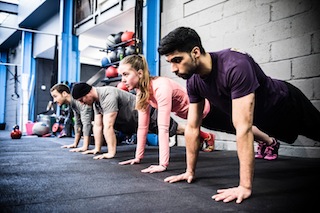 Late last year, I introduced the idea of the minimum effective dose: the lowest dose to produce a desired outcome. Whether it’s calorie intake, exercise, sunlight, carbohydrates, or work habits, we often think we need much more than we actually do to get the results we want. Why crank out those extra reps, put in those extra few hours, choke down another chicken breast if they won’t make you any more prepared to handle what life dishes out? Failing to heed the minimum effective dose costs you money, time, and mental real estate. Figuring out the minimum effective dose for the various inputs shaping our days can make us more efficient and open up the rest of our life to do the things we actually want to do.

What, exactly, are the minimum effective doses for exercise? How little do I have to train to stay and/or get fit? And what kind of effects can we expect to get from said minimal doses?

The answers to those questions will depend on who’s asking, but we have a few specific examples of people maintaining, improving, or radically transforming their fitness levels with minimum effective doses of exercise. Let’s take a look.

Cardiovascular de-conditioning during the off season is a big issue in cardiovascular-intensive sports like soccer. The last thing many athletes want to do after a grueling season is to resume even more-grueling training on a regular basis. Understandable, but then they come back a couple months later and suck wind for a few weeks until they’ve regained their endurance. What if there were a quick and dirty, efficient way to train and maintain your endurance in the off-season — or any season, for the average person who doesn’t want to work out more than he has to work out?

In 2014, semi-pro soccer players were placed on one of two off-season training regimens:

Both HIIT regimens used identical training loads, and it was fairly brutal: five 4-minute high intensity rounds at 87-97% of maximum heart rate. No mention of rest intervals, but I’d imagine they were at least several minutes long to allow them to recover sufficiently. Whether they did it every week or every two weeks, the soccer players maintained their VO2max. There was no cardiovascular advantage to doing it every week. Those biweekly sessions would have been miserable, but they were over pretty quickly, leaving the soccer players plenty of time to work on sport-specific skills and other forms of training (or, you know, reading, going out to dinner with friends and family, hiking, watching good movies, etc). In fact, those players running HIIT every other week also trained a couple hours every week, mostly strength training; the every week group trained over five additional hours a week.

We all (think we) know how to improve aerobic fitness: cardio. Whatever that means. But cardio, at least how most people envision it, takes forever and is pretty darn boring. What if you could improve your aerobic fitness while also improving your muscular endurance — the amount of work your muscles can endure, the amount of time you can keep your force output high — in a fraction of the time?

All that in just 16 minutes of work a week.

What does “physical fitness” mean to you? In my book, it’s a combination of strength, strength-endurance, and aerobic capacity. The ability to go hard, go fast, and go long. A pair of researchers came up with a “7 minute workout” designed to improve these physical capacities in as little time as possible. The exercises are basic, but effective (as is always the case, right?). Each one is to be performed for 30 seconds with 10 seconds of rest in between exercises.

Both exercising groups enjoyed improvements in muscular endurance. The males in both groups also got stronger, while the females improved their aerobic capacity. Training for 14 minutes (which is fairly minimal to begin with) wasn’t necessary to obtain results.

You’ve probably heard me discuss mitochondrial biogenesis: the creation of entirely new mitochondria. This is important because mitochondria are the power plants of the cell and ultimately the body. They metabolize fuel and convert it into useable energy. The more mitochondria you have, and the better they work, the more fat and glucose you’re going to utilize. And since energy overload is toxic to our cells and predictive of many disease states (diabetes, inflammatory conditions, etc) having more mitochondria on hand will keep you healthier for longer. How much exercise do you actually have to do to promote mitochondrial biogenesis?

Not a huge amount, but you will probably have to sprint. In the short term, a workout consisting of four 30-second all-out cycling sprints activated mitochondrial biogenesis in the skeletal muscle of human subjects in one study. Shorter sprints work, too. In fact, a program consisting of three sets of five 4-second (yes, four seconds!) treadmill sprints with 20 seconds of rest in between each sprint, done three times per week for four weeks up-regulated molecular signaling associated with mitochondrial biogenesis. You could do that during a commercial break.

I’ve also talked about the importance of maintaining good insulin sensitivity and how exercise can hep in that regard. Turns out that it doesn’t take much to see a positive effect. Research indicates that four to six 30 second bouts of all-out sprint cycling with four minutes of rest done three times a week improves insulin sensitivity in already-active and sedentary young adults. Measurements were taken 72 hours post training, just to be sure that the improved insulin sensitivity wasn’t a result of acute exercise effects. That’s 6-8 minutes a week of actual work for massive improvements.

Visit most fitness communities online and walking gets short shrift. Walking isn’t exercise, they’ll say. It’s a poor substitute for “real” movement that invariably involves grunting, heavy weights, gallons of milk, and chalk. Not to take away from the heavy lifting, because that stuff is indispensable. But walking isn’t useless; it’s essential. There’s even evidence that a tiny amount of walking at a moderate pace — 15 minutes’ worth, to be exact — is enough to blunt the postprandial spike in glucose that can occur in people and lead to real problems down the line. Make that walking “brisk” and you can cut the necessary volume down to a single 21-minute bout while enjoying beneficial effects on postprandial insulin.

So don’t let anyone tell you those short post-meal strolls aren’t helping. They are. They represent a minimal yet highly effective dose of movement that improves your ability to handle blood sugar spikes after meals and regulate your fasting blood sugar throughout the day. More intense, higher volume training certainly improves blood sugar control, too, but a short walk after meals is the simplest, easiest, and most minimal.

Furthermore, many of these protocols will have crossover effects with each other. You don’t have to — and probably shouldn’t — do all of them, because then you’ve just constructed a high volume training regimen.

Not so daunting, is it?

What are your minimal effective doses for exercise? How little have you gotten away with while enjoying improved health, fitness, and vitality? I’m always looking for ways to cut back on training while retaining the effects, so have at it down below!