5 Reasons to Run Outside Instead of on a Treadmill 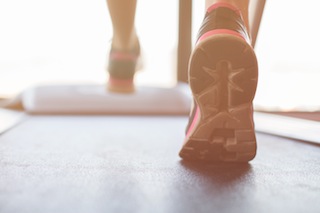 Let me get this out of the way: treadmill running is better than sitting on the couch reading blogs that outline the reasons running outside is better than running on a treadmill. If it’s your only option – or even just the way you prefer to exercise — have at it. You have my blessing. The best exercise is the one you’ll do, remember. But there are limitations, risks, and biomechanical changes that occur when treadmill running. It’s not the same as running outside, and there’s evidence to suggest it might be worse in some respects.

So let’s explore the potential problems associated with treadmill running:

1. Running outside is more enjoyable.

This makes sense on an intuitive level, but there’s actually empirical evidence to suggest that outdoor running is more enjoyable than indoor running. A 2004 study out of Duke University found that when on treadmills, runners ran more slowly, reported higher rated perceived exertion (RPE), enjoyed themselves less, and experienced less satisfaction than runners doing their thing outside. And it’s that second part that’s really interesting: the higher RPE when running on a treadmill, even at objectively lower speeds. If an exercise is so boring that it becomes work and you don’t feel like you accomplished much after doing it, you are less likely to do that exercise. We are more likely to stick with a workout regimen if we enjoy it and derive intrinsic value. Running through nature or even around your hood as the sun goes down confers the enjoyability factor that’s just missing from most treadmill runs.

2. Treadmills are flat and linear and unchanging. The outside world is not.

Every little pebble, every half buried root, every slight dip and furrow and bump on the ground and elevation change must be addressed by the biomechanics of those who traverse it. And these slight variations happen subconsciously. Often, we don’t even realize we’re changing joint angles and altering muscle activation patterns in response to elevation or textural changes along the path. But our walking experience is characterized by thousands of these subtle reactions, and our bodies adapt to them. Thus, the trail runner travels in a well-rounded, highly-adaptable body, equally comfortable on tracks, fire roads, forest paths, and city streets. The exclusive treadmill runner is good at running on treadmills.

But it’s more than just adaptability to different terrains. The exposure to different terrains means no step is the same and the load is balanced and dispersed. On a treadmill, every step you run is the same as the last one. Nothing changes. Your foot lands in exactly the same place with exactly the same cushioning and your joints travel along the same path and receive the same stresses. This is a recipe for repetitive strain injuries. And although there’s very little data in the literature on treadmill runners and repetitive strain injuries, I’ve seen it happen in almost every heavy treadmill user I’ve known. Shin splints, IT band pain, the works.

3. Treadmills change the biomechanics of your run.

Still, is this a problem? Plenty of people use treadmills everyday seemingly without any major issues.

Even though a human body can technically perform many novel movements without apparent harm, be wary of altered movement patterns that persist. Consider the carpal tunnel from using a mouse and keyboard that develops over the course of many years. Consider the weakened glutes, tight calves, and tight hip flexors office workers often have. You can sit in a chair for a day, week, or even months on end and feel completely fine. It’s the sitting for years and decades that get to and prevent us from being able to squat comfortably or engage our glutes. I’m similarly suspicious of treadmill running, particularly with the subtle but significant kinematic changes observed. And because treadmill running is higher intensity than clicking a mouse or sitting at your desk, the negative effects — if they exist — likely accumulate much faster.

4. Treadmills don’t engage the posterior chain as much as running outside.

Runners typically generate the majority of their power with their posterior chains: the glutes and the hamstrings. It’s the hip extension, powered by the glutes and hamstrings, that propels the runner across the terrain. Since treadmill running cuts way back on peak hip extension, instead favoring hip flexion, the already sorely underdeveloped (from sitting and office work and generally sedentary living) posterior chain receives even less attention. Why engage the glute to bring your leg back and your body forward if the tread belt does it for you?

If you like to run on treadmills, there are some things you can do to mitigate any downsides.

Set an incline. This makes treadmill running a little more similar to road running by engaging more posterior chain. And one study found that treadmill running with a 1% grade effectively recreated the energetic cost of flat ground running.

Take breaks from the treadmill. Don’t run exclusively on the machine. Get outside for some runs, and be sure to throw in posterior chain strength work (Romanian deadlifts, kettlebell swings, hill sprints).

Listen to music, podcasts and/or audio books. On the few occasions that I go for a “run” these days, I always choose an interesting locale. The beach, the mountains, a new city (when traveling). Running in interesting environments becomes its own reward, and I never find I need a pair of headphones whisking me away to another place. The setting is its own entertainment. But a treadmill is stationary, usually in a gym. There’s not much going on worth watching, hearing, or smelling, and this is a big reason why treadmill runners rate their experiences as less satisfying and pleasurable; there’s neither intrinsic nor extrinsic value. So strap on a set of headphones (or earbuds), subscribe to a podcast or two, and give yourself more satisfaction and enjoyment each time you run.

Sprint. Some research (PDF) finds that the kinematic differences between treadmill running and overground running, while substantial, disappear at speeds higher than 6 m/s (13.4 mph). Sprinting just makes everything better, doesn’t it?

Again: I don’t mean to bash treadmills. They can certainly be helpful, and many successful athletes use them in their training. But very few of the top people are using treadmills exclusively. For any endurance athlete, the majority of the work is done on the road.

Enough from me. Let’s hear from you folks.

Do you use the treadmill? Does any of today’s post ring true to your experience? What differences do you notice between treadmill and road running?