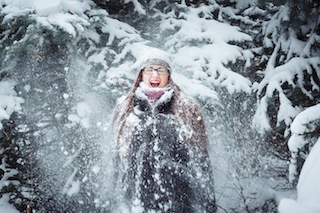 With winter all but officially upon us, we might already be feeling the season, maybe even planning warm weather vacations. I venture most of us have wondered if we’re not somehow healthier during the summer months. Is it just a mental vitality from the additional daylight hours and relative ease of outdoor time, or is there something more at work? Does our health really take a hit in winter? For those who enjoy this brand of trivia, there’s an actual field of study devoted to this called biometeorology. And with the minutely detailed research into epigenetic activity, we’re getting a fuller picture all the time of astonishing nuances as well as big picture shifts. To a Primal mind, it all makes sense. Humans evolved within a seasonal context—without any of the modern accommodations that would buffer climate or weather influences. Why would our bodies not have adapted with responsive wiring?

With the span of modern research—everything from massive epidemiological analysis to epigenetic science—we’re seeing both the finer nuances and the global patterns in environment-biology interaction. One recent study earlier this year, for example, revealed the activity of nearly a quarter of our genes varies depending on time of year—with seasonality cues that are remarkably geographically specific. The shifts influence our immune function as well as the composition of our blood and even fat.

I’ll admit this is exactly the kind of thing you could get me talking about for hours, but let’s keep things simple and look at a few of the most common and significant seasonal health patterns. It might just have you rethinking your annual exam routine—or at least its place on the calendar.

Your Cardiac Health and Risk

It’s no one’s imagination that we see more cardiac deaths during the winter months. The seasonal blood vessel narrowing may push those with arterial build-up, for example, over the edge in terms of blockage.

Oddly, it doesn’t seem to matter how hard winter hits your region. One study followed the incidence of cardiac-related deaths in seven U.S. locations (ranging from Los Angeles County to Massachusetts. Both total and cardiac death rates rose during winter months at roughly the same (26-36% compared to summer deaths) across all locations. Researchers often speculate that people move less in winter, even in warmer climates, and that this discrepancy could be a major contributing factor.

Yet, there may be other factors at work, particularly for those who live in colder climates. Blood viscosity (thickness) increases substantially in cooler temperatures. In one study, viscosity rose more than 26% when temperatures dropped from 98 degrees Fahrenheit to 72. The thicker our blood, the higher our risk for stroke and ischaemic heart disease.

In response to the lower temperatures of winter, blood vessels constrict, which raises your blood pressure and, particularly for those with higher measures to begin with, puts added stress on the heart and circulatory system. The rise in blood viscosity and decrease in blood flow rate naturally requires a corresponding increase in blood pressure to compensate.

For anyone who’s been diagnosed with high or borderline high blood pressure during the winter months, it’s important to take into account the seasonal shift. Get your levels tested throughout the year to get a more accurate picture. You may have what’s called “seasonal hypertension,” which research suggests is more common in certain people. Knowing that your numbers vary during the year will help you make a more informed decision about any given treatment your doc might recommend.

Researchers studied a group of men and women over a twelve month period, recording biomarker results for each season and collecting records for diet, activity and sun exposure during the year as well. Results showed that total cholesterol peaked in winter (as did HDL). (PDF)

Women showed the greater increase in total cholesterol at 5.4 mg/dL (a January peak) compared to 3.9 mg/dL (a December peak) for men. Those who had higher cholesterol levels to begin with showed the biggest seasonal rise. The researchers found no overall significant difference in dietary intake among the seasons and attributed a substantial portion of the increase to seasonal shifts in relative blood plasma volume.

As the researchers note, these differences have been demonstrated in other studies and suggest that seasonal shifts should be considered in medical testing. In other words, if you get your cholesterol tested in July and then in December, your numbers have a greater chance of looking “worse.” If you get them tested in December and then in July, they’re more likely to show “an improvement” when all that’s happened is natural seasonal shift. Obviously, these varying numbers would probably influence your doctor’s recommendations.

In a less expected twist, much has been made of the so-called “brown fat” that can convert fat into heat to warm the body. The more brown fat we have, it appears, the more adept we are at regulating our blood sugar, the more insulin sensitive we are and the better we are at burning our fat stores. Researchers have discovered how the body has an innate ability to convert typical “white” fat into “beige” fat when exposed to cold temperatures (a process hampered in obese people).

It may be one of our body’s innate bits of genius, but unfortunately the process may not be the completely seamless miracle you might think in our modern age. The activation of brown fat, it appears, causes more fat to be stored into the blood. Because vessels are constricted in cooler temps and cold can make atherosclerotic plaque less stable, the end result can be a greater risk for cardiac events, particularly in those with a history and propensity for atherosclerosis.

Our innate responses to our environments without question served our survival thousands of years ago. Today, they still serve our basic biology but not necessarily the ways modern life has skewed our daily behavior toward unhealthy diets and relative inactivity. Winter, I think few of you in the northern regions will doubt, imposes physiological stress on our bodies—the kinds of stresses we were designed to be able to incorporate and match with our own adaptations. The colder season, if you’re healthy, can make you that much healthier with some Primal behaviors (and vitamin D supplementation) Grok and his crew would’ve participated in. If the winter season is, instead, highlighting our current health limitations, we can consider it a call to live more, not less, in tune with the challenges our Primal roots were designed to anticipate.

Thanks for reading, everyone. Share your thoughts and questions in the comment board, and enjoy the end to your week.