Listen to the Chrises Kresser and Masterjohn discuss cholesterol, thyroid hormone, iodine, goitrogens, and heart disease on the Revolution Health Radio podcast, their third on the subject. Here are parts one and two.

Less trans-fat is coursing through the blood of white American adults.

A recent study found that a lack of sun exposure was linked to a higher risk of stroke.

Why you should include unilateral lower body movements in your workouts and break up all that pure unadulterated back squatting from time to time.

As mentioned in the recent article on sulfur-rich vegetables earlier this week, the best and easiest way to cook sulfur-rich veggies is steaming until “tough-tender.” Top with some form of fat – butter, olive oil, animal – and you have a simple and delicious side dish. Inevitably, however, the day will come when you’ll be staring at a plate of steamed broccoli and butter thinking, there’s got to be more ways to dress up sulfur-rich veggies.

And you’re right – there are. When you’re feeling more ambitious, steam your favorite sulfur-rich veggies as usual, then turn them into a one-bowl meal by smothering or lightly covering them in a flavorful sauce or broth. One delicious example: a bowl of steamed broccoli and cauliflower becomes an entire meal when fish soup in a tomato-saffron broth is ladled on top. Garnish with shredded cabbage that will soften slightly in the hot broth and you’ve got yourself some sulfur-rich soup…a name that doesn’t do justice to how deeply flavorful and tasty this meal is. The light tomato broth can be made creamier by adding coconut milk – your choice – and the soup works well with either firm white fish or fatty salmon.

No More Styrofoam Rice Crackers for Us!
By Guest
159 Comments

I was always super skinny as a teenager, and I ate rubbish everyday with no thought to my health or weight. I hated exercise and avoided it like the plague. I would do anything to get out of PE each week. My poor PE teacher, Mr. Jackson – I was on my period every week for two years! Anything to get out of cricket or touch footy! Will someone puh-lease make school PE fun??? At 15 years old I weighed 42kg/92lbs and stood 173cm/5’9” tall.

My mum was always overweight, and had Lupus and took a lot of steroid medication which she always said made her fat. That woman ate nothing bad according to CW. She was on every diet bandwagon that came to town. I admired her determination. She did Jenny Craig when I was about 15 and she was thin while she ate that tinned “food” but it never lasted. In the 80s both my parents went mad for aerobics and the Pritikin diet, but we all hated the food so much that it didn’t last in our house. My dad loved his ice-cream too much! We ate really basic old fashioned food. Porridge/oatmeal for breakfast in winter, cold cereal in summer, bacon and eggs on the weekends. Lunch was cold meat and salad with no dressing. Tea was meat and three veg with no gravy sauces or anything fancy. Mashed potato was for special occasions and everything was bland and boring. Salt was gonna kill you, and so was butter. I was known to get the butter and milk out of the fridge during dinner and mash my own potato on my plate. Mum baked scones, and biscuits, but we ate this homemade stuff in moderation.

Akrasia, or Why You Act Against Your Own Better Judgment
By Mark Sisson
119 Comments

Akrasia: it’s the word of the day. It may be a 25¢ word, but it’s a concept with which we’re all familiar. Essentially, it’s acting against one’s own best interest. We’re not talking here about the noble, altruistic deeds that purposefully put others’ needs before our own. Akrasia encompasses that irrational, confounding state of mind in which we wittingly throw caution, reason, and consequences to the wind in order to pursue a choice we understand will be bad for us. In other words, we know better. In fact, we know pretty much exactly what repercussions will befall us. That chocolate donut in our hand, for example, will undoubtedly cause our IBS to flare up – or have us bemoaning the paunch look later. Staying up late to watch one more episode of Breaking Bad will leave us comatose in tomorrow’s big meeting. Skipping yet another workout keeps us on track to lose all the gains we’ve built up the last few months. Stewing over the day’s stresses and playing out angry scenarios in our heads will keep our kids and partner at arm’s length and us up half the night with stomach pain.

Is Honey a Safe(r) Sweetener?
By Mark Sisson
343 Comments

I pride myself on making the Primal Blueprint an easy lifestyle to follow. If you were just starting out, you could easily read a few articles, do a couple hours of research, and start making positive changes to your diet, exercise routine, sleep schedule, or daily life immediately. You could ditch grains or replace some chronic cardio with weights or switch to grass-fed meat, and even if you did nothing else, you’d have made a significant improvement to your life and eventually your health. I often receive thank you emails for putting together a program that Internet-illiterate grandmas and grandpas can get into and actually understand. That said, sometimes things get a little confusing. 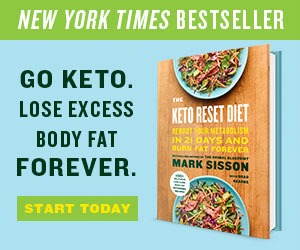 Fasting with a Cold: How Does Fasting Impact Viral and Bacte...

Carb Refeeds for Women: Do They Help With Fat Loss?