200 Pounds Down and Grateful to Be Alive

Ever since the age of 8 I can remember being different. The only sports I was ever picked for were wrestling and tug of war. The President’s Physical Fitness Test (particularly the 600 yard dash) nearly killed me every year, and my failure provided endless hours of laughs for the other kids. The only saving grace was that I developed a bit faster and even though most of the kids acted like big shots, many of them were aware that it wasn’t too smart to push the big kid too far… unless you wanted to be seen running away, which was more than their fragile egos could take. I did develop an easy going “jolly” personality, which helped me save what little face was left, and diffuse most situations. At least social media hadn’t been invented yet!

This social stunting continued all through high school and various employments, until I was about 30 years old. Naturally, I tried the conventional wisdom route many times but due to the unrelenting cravings, the most success I ever had lasted about six months. I ended up being treated for congestive heart failure and the doctors propped me up with meds and told me to lose weight or lose my life. Then they sent me home with the same damn low-fat diet I knew I could not stick to, even in the face of death. I went home depressed and expecting to die.

The most important moment of my life happened shortly afterward. I went out one night with a friend, and we met up with one of his friends that happened to have a master’s degree in health promotion and knew the cutting edge research in the health and fitness field. He took a look at me and heard my story, then immediately told me I was insulin resistant and needed to go on a low-carb diet. This was all new and naturally unbelievable, because I knew and believed the conventional wisdom even though it obviously wasn’t working for me. After he left, I told my friend it sounded like bunk and I didn’t plan to follow the low-carb advice. My friend just looked me in the eye and said, “What do you have to lose? If things continue as they are you’re going to die! Do you have a better idea?” I was above 400 lbs at 5’6″ after all and not in good shape in any respect.

I told my friend that his logic was sound, and I could certainly deprive myself of some junk food and at least give it a real try. I did and I was amazed. I read Atkin’s and pretty much all of the low-carb books, and the weight started to virtually fall off. My cravings disappeared and eating became a choice rather than an addiction. I went off all my meds, began exercising, and felt better than ever. I am still angry with the medical establishment for knowing less than a friend of a friend in a bar! They sent me home with a death sentence when I didn’t even really need medication. I could have had a much better life and saved myself some real damage with that simple knowledge. Better late than never I suppose. My friend actually told me I was the only person he ever saw return from the dead. One day he summed up my situation when he said, “You must feel like Superman now. You were so gravity challenged most of your life.” It was a bit like walking on the moon. My weight was so much less than I was use to carrying around. No more congestive heart failure symptoms for me!

I kept the weight off for many years but I slowly loosened the reigns and regained half of it. This time I knew what to do and began taking care of the problem. Then I received my second revelation… Thanks to Mark Sisson of Marksdailyapple.com who showed me that the only thing better than a low-carb diet is a low-carb Primal Blueprint diet, consisting of low-carb whole foods that humans are genetically adapted to eat. There are many other lifestyle factors that the Primal world focuses on to complete the health and fitness picture too and I took advantage of those. I eventually dropped to a low of 176 lbs, accounting for a loss of over 200 lbs. 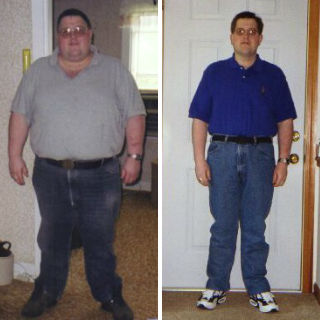 Initially a user from the low-carb forums told me about MDA. I checked it out immediately. Unfortunately I thought it was the hokiest thing going and thought Mark was just trying to sell goods. I continued to read MDA and The Primal Blueprint; the logic and truth spoke to me like some sort of gospel and I realized this was the key to the last lock. I have been a follower for years now and it’s continued to keep me on track.

That’s where I am today; most of the way back to a decent weight, much better health, and grateful to be alive… but still supremely pissed at the “experts” that I paid good money to that led me (and damn near everyone else) astray and still continue to do so! After discovering MDA I realized that going Primal was the icing on the cake I had been missing by simply doing low-carb.

I want to thank Mark, the worker bees, and Robb Wolf too, for all they have done and continue to do.