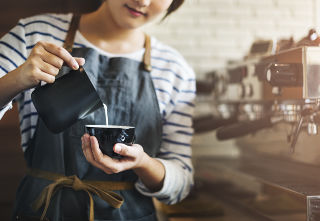 According to the stats, more than 80% of American adults use coffee to get going in the morning. Increasingly, we’re getting collectively pickier about what we drink, too. A report released this year by the National Coffee Association found that, for the first time in 67 years, more than half of all coffee consumed daily was classified as “gourmet.”

But let’s be honest. There’s a lot of junk in that category—syrups and whipped toppings, soy milk and sugar galore. It’s a damned shame because coffee can offer big health benefits when done right. When done even better? Well, let’s take a look.

Whether you’re getting your coffee to-go or brewing a batch at home, know which sources are best. What certifications should you look out for? What questions should you ask your barista? What’s worth avoiding altogether? Let’s dive in.

Coffee has one of the highest pesticide application rates in the world, with studies showing full-spectrum pesticide residues (including DDT) in many conventional coffee beans are more common than not. It seems like an easy win, but some research shows that washing and roasting together remove most of the pesticides residues from coffee beans. So, I wouldn’t sweat it for the sake of toxicity. However, other studies indicate organic coffee may be more liver-protective and higher in health-promoting compounds than conventional coffee.

Recently, there’s been a surge of interest regarding the potential contamination of coffee beans and products with mycotoxins, and it’s a debate which continues to raise hackles. Essentially, mycotoxins are the by-products of fungi that grow virtually everywhere and on everything. In the coffee world, there’s two types of mycotoxins in particular that are known to cause their fair share of health issues when ingested—Aflatoxin B1 and Ochratoxin A.

Both Aflatoxin B1 and Ochratoxin A are known carcinogens (amongst other things), meaning it’s a good idea to avoid them when you reasonably can. But it’s estimated that they contaminate around 25% of all foods, leading many coffee aficionados to question the credibility of claims that certain forms of growing and processing can ensure (pricey) products labeled “mycotoxin-free” are much better than those that simply use fairly standard practices most higher quality coffee producers employ anyway. Those same folks also tend to quote a study showing roasting contaminated coffee beans reduced mycotoxin levels by an average of 69%.

As I’ve shared recently, I wouldn’t stress about this point because coffee consumption appears time and again to be protective against most types of cancer and shows a protective relationship with all-cause mortality.

For a company to receive the Fair Trade cert, they must employ strategies for environmental sustainability on the grow op. It’s possible that this could mean less chemical applications during growing and healthier soils, which means a less toxic, more nutrient-dense coffee…but that’s really just pure speculation. Either way, ethically, it’s still preferable to a coffee that isn’t Fair Trade.

That being said, Fair Trade coffee isn’t well known for having high quality standards. As an alternative, you could consider buying “direct trade” coffee—but this doesn’t necessarily guarantee anything, meaning the quality (and therefore health factor) of the coffee in question is dependent on the importer/roaster.

Single origin is another area where there’s a decent amount of uncertainty, but the fact remains that drinking blended coffee makes it harder to determine whether the origins of your beans were good or somewhat lacking in the quality department.

While coffee connoisseurs might argue that blends produce tastier, more complex flavors, there can be a tendency for certain importers to select cheaper beans and hide behind the un-traceability of their brew.

In addition to the amazing ecological benefits presented by shade-grown coffee, there’s also a decent amount of research showing the nutritive advantages of shade-grown over conventional coffee beans. This study, for example, showed that beans grown under lychee shade had higher yield, greater phenolic content and superior antioxidant activity than conventional beans.

It’s a well-known fact that the antioxidant potential of a given coffee bean can be vary considerably depending on whether it is green (aka raw) or roasted. Studies have shown that, while green coffee has higher levels of chlorogenic acid (itself a very desirable antioxidant), roasted coffee tends to have higher levels of protective antioxidants.

If you have the choice, opting for roasts that fall within the middle of the scale (like blonde and medium roasts) should provide the highest levels of bioactive phytochemicals.

Ultimately, whether you choose Arabica or Robusta beans comes down to personal taste more than anything. The antioxidant potential of each varies considerably depending on the region it was grown in, the way it was processed, and how it was roasted…meaning recommending one over another is a bit of stretch.

One thing to keep in mind, however, is that Robusta generally has significantly higher levels of caffeine than Arabica. Depending on your needs (and considering the fact that caffeine is an antioxidant itself), this may be a more influential factor in choosing between the two kinds.

If you’ve made the decision (or had your hand forced by the powers that be) to steer clear of caffeine, decaf coffee is still an okay choice…provided you choose wisely. Typical methods of caffeine extraction include organic solvents, water, or supercritical CO2. Most is produced using solvents like methyl chloride and ethyl acetate, which you really don’t want, so finding a decaf that doesn’t use nasty chemicals to remove the caffeine is the name of the game.

Keep in mind that decaf does tend to be a bit lower in antioxidants than regular, and that it’s not completely free of caffeine.

As with all perishables, coffee is not immune to the vagaries of air, light, heat and moisture. Here’s a few tips on how best to store your coffee to avoid significant declines in quality and taste:

Healthier Additions For Your Coffee

Coffee by itself is good, but coffee with strategic additions is even better. Here are a few health-minded upgrades that may not only make your coffee taste a whole lot better but amplify its already impressive nutrient profile as well.

If vegetable oil based “creamer” is the epitome of lousy coffee, real cream is the pinnacle of coffee excellence. Because of the high fat content, choose organic at least and (even better) grass-fed to get the most benefit from those healthy fats.

While cream has less allergenic potential than the likes of milk, it still contains trace amounts of lactose and casein. Macadamia cream certainly comes to mind, as it’s almost as rich and fatty as dairy cream. Tahini is also a decent cream substitute, due to its high fat content and coffee-compatible taste. And coconut cream is another obvious alternative, but the taste isn’t for everyone and it’s essential to find a product that isn’t laden with additives, preservatives and plastics.

Butter is even less likely to provoke food allergies than cream, and it’s almost as tasty. Beyond all the Bulletproof-esque hype, there’s undeniable benefits to adding butter to your cup of Joe—like easier absorption of the fat-soluble vitamins in coffee, and the vitamins and healthy fats in the butter itself. This is especially true for grass-fed butter. Just make sure you’re giving the caloric content full due here.

I’ve written about this before, and the team will routinely offer up collagen coffee recipes on the blog here and on the PrimalKitchen.com blog. It’s become a go-to for me since the early days of Collagen Fuel mixes. (My personal favorite in coffee is the Vanilla Coconut.)

Nine times out of ten its natural sweetness is enough to make up for any lack of sugar. Plus, there’s the fact that it can offset any blood sugar spikes if you also end up adding sugar, and the way in which its earthy spiciness blends seamlessly with the flavors of a robust brew.

In a study published last year, blending coffee with cardamom produced enhanced free radical-scavenging and antioxidant properties over coffee alone. And if you’re partial to a little cardamom in desserts, you’re bound to enjoy it in your coffee.

If you’ve got a soft spot for mocha, you could do worse than to add some raw cacao nibs or ultra-dark (>85%) chocolate to your daily cuppa. Cocoa beans are loaded with polyphenols, healthy fats, and a bucketload of flavor that pairs swimmingly with coffee beans.

A quick and dirty method is to roughly chop some dark chocolate squares, pour some freshly brewed, hot coffee on top to melt the chocolate, and add a decent serving of fresh cream to complete a drink that can hold its own against any mocha out there.

Finally, for anyone who’s craving some now, check out these 7 healthier coffee recipes that use many of the strategies above.

Thanks for reading, everyone. How do you make your morning brew the best? Got any great healthy additions I didn’t cover here?