13 Worthy Alternatives to Traditional Sprinting You Should Try 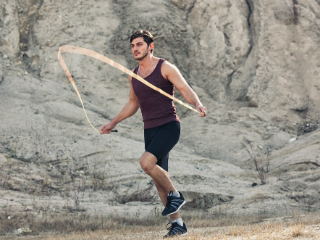 Sprinting is great. For my money, it’s the best bang-for-your-buck exercise. If you have only fifteen minutes to spare, you can sprint. If you’re on the road without access to a gym, you can usually find a place to sprint. It’s the missing piece in the quest for optimal leanness; incorporating weekly sprints can really help the fat just melt off. There’s just something about the raw, maximal expression of absolute effort that makes a person feel good, feel alive, and feel, well, Primal.

But not everyone wants or has the capacity to run as fast as they possibly can on a flat surface. Whether because of old/current injuries, the general state of the body, or simple personal preference, a significant portion of the population isn’t going to be running sprints on a track. Maybe you hate it. Maybe it hurts too much, or you’re worried about throwing something out. Whatever the reason for your sprint abstinence, there are worthy alternatives to traditional sprinting.

And here are a few of my favorites:

Pick 3-4 compound movements you can do and rattle 3-5 reps of each in succession without dropping the weights. I like “power clean, overhead press, front squat, barbell row” for a brutal session. You can try PaleoFX founder Keith Norris’ rendition of a classic barbell complex. You can do whatever you want. Just don’t drop the weight!

Barbell complex are great for people who are highly proficient in the movements. But, since any movement works, anyone who uses a barbell regularly can probably cook something up. You don’t need to do behind the neck presses to overhead squats to snatches. You can do simple movements just as effectively.

They’re easier on the joints. Your foot doesn’t travel as far and the impact of each footfall is lessened.

I find giving a little hop to begin gives me an explosive start.

Hill sprints are great for people whose knees hurt when they run normally or suffer hamstring pulls. Tread lightly, though.

If you recall from the recent post on walking and running surfaces, sprinting on sand produces awesome results with minimal loading and impact. The sand makes it hard to go really fast, so even people who don’t think they can sprint often can on sand. But since you’re trying to go really fast, you get a great training effect with reduced speed and impact shocks. Win win.

And for the easiest-hardest sprint ever, sprint up a sand dune. You’ll be going as hard as you can yet only hit a few miles per hour. It’s a strange feeling. You’ll collapse like a sack of rocks after each sprint. Try it carrying a yellow lab!

Sprint while watching TV (although if you’re able to follow the storyline perfectly, you’re not doing it right). Sprint from the comfort of your own home. Sprint while your newborn hangs out on the couch. Sprint despite jogging killing your knees.

For even better results, get a Schwinn Airdyne off Craigslist and destroy yourself (without hurting yourself).

I’ve professed my love/hate for the Versaclimber before, and I stand by my original assessment:

It uses every muscle in the body. Upper body, lower body, the trunk to stabilize, the heart to pump much-needed blood and nutrients around, and all the little muscles in between.

It’s low-impact. You’re not slamming or banging around. You’re pulling and pushing and, well, climbing.

I typically do 1 minute on, 2 minute off sprints. But I’ve been Versaclimbing for a long time, so I’ve worked to that level. I also like doing “sprint snacks” of 5 seconds on, 5 seconds off; that might be more accessible for the uninitiated.

And no, it’s not a stair master. Stair master steps move on their own and you keep up. On the Versaclimber, you move the steps yourself.

Swimming requires the most skill to do true sprints. You can splash around like a shark attack victim and tire yourself out, but you won’t get much of a training effect. You want to move crisply and smoothly through the water. So take some lessons if you need them.

Learn freestyle. Butterfly is probably the most taxing stroke, but it takes real skill to get anything out of it.

Keep your fingers together to recreate webbing. Splaying out your fingers slows your speed and the amount of resistance you face. We aren’t amphibians or Kevin Costner in Waterworld.

Use long strokes. Really reach out and pull yourself through the water. The arms are king.

For an alternate leg-centric swim sprint, flip over onto your back, cross your arms across your chest, keep your head out of the water, and dolphin kick your way across the pool. This really kills your hamstrings and abs.

Swimming is the lowest impact sprint around. Great for the injured or trepidatious.

I’m not talking about the half-hearted limp-wristed garbage you remember doing in PE class. Go for quantity and quality. Do as many jumping jacks in 10-15 second bursts as you can. Rest for twice as long as the active interval lasts. Don’t try to jump high. Jump quickly. Whip those arms. Slide those feet out.

I like these as an alternate to burpees. You can do them anywhere and they’re a bit safer.

Jumping rope is hellish. There’s a reason fighters of all stripes use the jump rope to condition: it gets you fit quick.

It’ll also give you monster calves.

For some great jump rope sprint ideas, check out this Ross Training article. He’s pretty much the go-to guy for jump rope.

I got these from Darryl Edwards, who used to have PrimalCon attendees perform them as warmups for his play sessions. And it’s exactly what it sounds like:

You sit down on the ground with legs straight and torso upright.

Now stand up as quick as you can, gathering your feet underneath (think squat position) you and standing.

Return to the sitting position as quickly as you can. You’ll have to stabilize yourself, which makes it harder.

It’s simple (almost anyone can do it) and if you really push the speed, you’ll be breathless. Keep the movements crisp and clean. Don’t get sloppy. Don’t flop around.

If I only have 15 minutes to train and there’s really no where to sprint, I’ll do burpees. A pushup, a squat, a plank, a squat jump. There’s so much motion packed into a short frame of time that you’re bound to get a strong adaptive response.

I like 20 rep sets with a couple minutes of rest. That’s a “true” sprint, where you allow yourself to become composed before doing the next one. You can also do tabata burpees, where it’s 20 seconds of activity with 10 seconds of rest, done eight times.

I would caution against anyone with shoulder issues doing burpee sprints. These are for folks without any known infirmities, save lack of time. As you get tired (and you will get tired, as that’s the whole point), your form will suffer. Throwing your body down to do pushups with bad technique will mess you up.

Real simple solution. Just get a decently-weighted kettlebell—32 pounds for women, 54 for men is a good starter weight—and do sets of 20 swings on the minute, every minute, for 10 minutes. You’re done in 10 minutes. And you’ll be done, if you know what I mean.

KB swings are usually good options for folks with knee issues, as—done correctly—swings place little to no pressure on the knee (all the pressure goes on the hamstrings and glutes).

These are simple and brutal. Push a heavy object across the ground. Dedicated weight sleds (AKA prowlers) allow you to load it up with weight plates, but are incredibly loud (metal scraping against pavement tends to do that) and usually require a gym. Cars in neutral (my personal favorite method) are easily accessible, but you do need a partner to steer.

Oddly, these are perfect for people with a general inability to subject their bodies to top speeds. If you’re pushing a small SUV up a slight incline, you won’t be going fast enough to impact your joints. It’s going to be primarily muscle and cardiovascular work.

That’s about it, folks.

If you’re not convinced about the benefits of sprinting, read this post.

If you want to avoid injuries while sprinting, read this post.

I’d love to hear from you, too. I know we have a knowledgeable readership, so let’s hear how you guys like to sprint!