12 Reasons Why Swimming Is an Essential Primal Skill 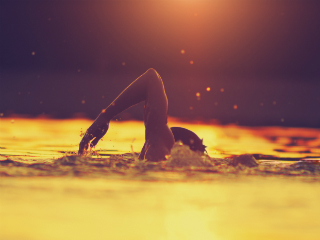 In the US, summer is upon us. And it is damn hot. To keep cool and to get in a good stretch after lifting, I’ve been putting in a few laps a few times a week.

As a triathlete, my most hated leg of the race was the swimming. I hated being in cold water. I wasn’t the strongest swimmer, so it was—physically—the toughest part. But in recent years, I’ve come to embrace my time in the pool (at least as a post-workout stretch). Maybe it’s cause my cold tolerance has gone up. Maybe it’s that I’m no longer swimming miles at a time, instead doing dramatically shorter swims. Maybe it’s because I do it for pleasure, rather than training for one of the world’s most grueling events. All I know is that those few laps every week have worked out nicely. But for you water lovers out there, there’s a whole host of benefits that swimming has to offer. So if you’re suffering from the summer heat and looking for a great way to cool down while getting in a pretty extensive workout, swimming should be toward the top of your list.

So, what are some of some of the benefits you have to look forward to?

Swimming is one of the most Primal skills. All throughout human history (and prehistory), people have settled in and around bodies of water. Rivers, lakes, and seas had the best food, the most important nutrients for building bigger and better brains, and we had to be able to handle ourselves in the water if we wanted to obtain those vital resources. Some populations have even developed physiological adaptations to a life in the water, like improved underwater eyesight. But even if you’re not a member of a seafaring nomad tribe, swimming is in your blood.

I can’t go out and run hill sprints or even bike sprints every day. I’ll hit a wall after a couple days of that after which the benefits cease and the negative effects accumulate. Traditional sprints on land are just too stressful. That’s why they work so well. Swimming isn’t like that.

You see, this is how elite swimmers train: every single day, often twice. Don’t use this as permission to overdo it. You’re not an elite swimmer, and you don’t need to be swimming for four hours every day. But what this does indicate is that swimming is overall easier on the body. You can recover quicker from it than other types of exercise.

3. Swimming is easy on the joints

Studies show that swimming is a great exercise for patients with osteoarthritis. Compared to cycling, swimming improves vascular function; both cycling and swimming reduce inflammatory markers and pain while improving stiffness and physical limitation in people with osteoarthritis. Turns out that the water is real easy on stiff, sore joints.

Swimming will keep your joints healthy by increasing motion, too. Since our connective tissues receive very little blood flow, they require conscious movement to shuttle blood, fluid, and nutrients toward and from them. Motion is lotion. Swimming is constant motion.

I wouldn’t only do swimming, though. You also need some stress on the joints to improve their strength and resilience.

Try it, guys. Hop in the pool, do a 50 meter sprint, and tell me how your muscles feel. It’ll be the best pump of your life. A pump so potent it’d bring 1970s Schwarzenegger to climax. If you don’t do this often, you’ll probably be sore the next day. Be warned.

5. Swimming is enough to keep your bones healthy

You might think that the gentleness of swimming and the perceived weightlessness of being in water would weaken the effect exercise normally has on bone. You’d be wrong, at least in rats. In rats subjected to three weeks of no exercise, interrupting their bed rest with swimming was enough to completely prevent loss of bone mass. The rats who didn’t swim progressed to full-blown osteopenia.

Exercise in general increases blood flow to the brain—it’s why a brisk walk can really get the creative juices flowing—but exercising in water boosts the effect. A recent study examined this. To avoid confounders, the researchers had subjects either do water- or land-based stepping exercises. Same type of movement and intensity, different medium. Those who stepped while immersed in water experienced augmented blood flow to the brain compared to landlubbers.

Even though the subjects didn’t actually swim, swimming will work. I don’t think there’s anything special about stepping. It’s the “being in water as you exercise” part that enhances the blood flow.

7. Swimming trains a very specific capacity you probably aren’t getting

One study found that adding weight training to a swimmer’s routine made them more powerful in the water (“tethered swim force”) but didn’t improve actual swim performance. Another found that only swim-specific lifts (bench press and pullover) improved swim performance. This means that swimming is doing something unique to swimming. It’s making you better in the water. It’s giving you a specific type of fitness that you can’t get elsewhere.

If your goal is total fitness and all around capacity, you can’t neglect swimming.

8. Swimming will keep you alive

If you’re a competent swimmer able to fluidly and efficiently tread water, float, and move through the water, it will be very hard to drown you. The world’s about 3/4 water. You’re really limiting yourself if you’re only comfortable on land.

Everything that taxes your oxygen use builds lung capacity. Lifting weights, running sprints, jogging, hiking, sex, and competitive hopscotch can all build lung capacity. But swimming is cool because it’s an environment where you often can’t breathe even if you wanted to. It’s not like holding your breath while running, where you just have to open your mouth and inhale. It’s too easy to let a little air slip in when you’re immersed in the stuff. Being underwater makes it easier to keep from breathing because you must actively choose to breathe. It’s an extra step.

There’s evidence that swimmers build greater lung capacity than runners. Swimming forces air restriction. Runners always have all the air they want, whenever they want.

Chlorine muddies the waters here; there’s some evidence its presence in pool water can worsen certain aspects of asthmatic function. But on the whole, swimming, particularly in non-chlorinated water, appears to offer special benefits to people with asthma and is less asthmogenic than other types of exercise. If it makes your asthma worse, don’t swim (or try a chlorine-free option), of course. You’ll know it if it’s getting worse.

If you’re looking for a way to expose your body to cold water, and you’re not one to idly sit in a tub full of ice water, swimming works. You’ve got a job to do. Swimming isn’t just exercise. It’s also cold (or cool) water exposure, provided you’re not in tepid bath water. Being in cool water forces you to burn more calories (via brown fat activation) to maintain your body temperature. If you can resist the massive spike in appetite many people experience after swimming, you’ll likely burn a little extra fat.

There’s something special about swimming beyond the fun it provides. You dive down below the surface and enter another world, an alien world where your interactions with the laws of physics are different than you’re used to. It’s a “reset,” a literal change of perspective. The immersion one experiences while swimming isn’t just a physical consequence of being surrounded by water.

Has anyone else been spending more time in the water this summer? Why do you like to swim? Is it leisure time, training time, or both? Let me know down below!