12 Common Causes of Bloating (and How to Eliminate Them) 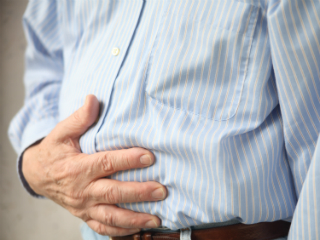 We’ve all been through it. You come home after a big day at the dog park, your owner pours a few cups of meaty kibble, and in your zest you can’t help but inhale the food. You chase it with a bowl-full of ice water. Sated, you try to lie down under the dining room table, but you can’t get comfortable. No position feels right. There’s something pressing on your insides. You feel like vomiting, but nothing comes out. Several dry retches later and the reality of the situation hits you: bloat. On goes the leash and you’re off to the emergency vet for a quick intervention.

Oh, wait. That’s not right. Sorry, I warged into my goldendoodle for a second. Bloat kills dogs. In humans, bloating isn’t fatal. But it is unpleasant, unattractive, and uncomfortable. It’s also difficult to pin down because it’s so nebulous. Let’s try anyway.

Bloating can manifest in a number of ways:

Bloating is mostly subjective. You can “feel” bloated without experiencing actual stomach bulging. Other times, it adds actual inches to your waistline.

Why does it happen? Why do our stomachs distend and our sphincters proclaim their gaseous intentions to the world? What causes this nebulous condition and how can we avoid and fix it?

FODMAPS, aka fermentable oligosaccharides, disaccharides, monosaccharides and polyols, are short-chain carbohydrates that are supposed to be absorbed in the small intestine and utilized by the body. In most people, that’s what happens: they get digested and absorbed. In the unlucky people who have trouble digesting them, FODMAPs make it to the colon for fermentation by gut bacteria. And that’s where the trouble starts. Fermentation begets hydrogen gas, which gathers in the gut and causes great distress. Common complaints of the FODMAP intolerant are bloating, stomach pain, and visits to the toilet that are either unproductive or way too productive.

For more information on low-FODMAP diets and avoiding the most common and immediate cuases of bloating, check out Fruit Belly. It’s a great primer for avoiding bloat, particularly the kind caused by maldigestion of short-chain carbohydrates. Also see my previous post on FODMAPs for the full list of foods that contain them.

Remember the FODMAPs as you read the rest of the post. You’ll notice the FODMAPs showing up throughout this article. When it comes to bloating, they are very often involved.

See my post for ideas on how to fix your FODMAP intolerance. Because never being able to eat Brussels sprouts, garlic, onions, and stone fruit is a terrible fate.

Psychological stress inhibits the action of GLUT2, the transporter responsible for the small intestinal absorption of glucose, fructose, and galactose in the gut. Without GLUT2, we can’t absorb those carbs, and they’re more likely to pass through to the colon for fermentation and gas production. Stress also alters the composition and function of your gut flora, making your gut bacteria less diverse and opening up space for certain gas-producing pathogenic species to overpopulate.

Get a handle on your stress however you can. Meditation (or its alternatives), herbs and teas, anti-stress strategies, frequent nature infusions, a daily walk. Rethink it. Just do it.

Among IBS patients with constipation, bloating is the symptom that receives the most vociferous complaints. It seems that IBS patients have trouble getting rid of the gas they accumulate. The gas literally cannot be expelled.

Obesity is consistently associated with bloating. It may not be causal, exactly. Whatever causes obesity may also cause bloating. But if that’s true, fixing the obesity will likely fix the bloating, too. Plus, who wants to be obese anyway? It’s bad for your health.

Lowish-carb Primal is my preferred solution for obesity. It really gets the ball rolling and it seems to be the easiest path to follow. I’m biased, of course.

Several studies identify gluten/wheat as a major bloating culprit. In Mexican adults, those who reported adverse reactions to gluten had objectively higher rates of bloating and constipation. Both the gluten itself and the short-chain carbohydrates found in wheat may pose gastrointestinal problems for susceptible people. Among some subjects, the non-gluten FODMAP components may even be the primary offenders.

In SIBO, the normally depopulated small intestine is overrun with bacteria. More gut bacteria should be awesome, right? Not in the small intestine. SIBO is characterized by a reduction in lactase (the enzyme that degrades lactose) and poor absorption of sorbitol (a polyol) and fructose (a monosaccharide). This allows all three short-chain carbs to pass through to the colon for unwanted fermentation and gas production.

As with IBS, a well-established protocol like GAPS (Gut and Psychology Syndrome) diet or SCD (specific carbohydrate diet) may also help against SIBO. In the meantime, try a low-FODMAP diet to eliminate the offending carbohydrates.

Fix your gut bacteria. I know, I know: that’s no easy feat. But I’ve written extensively on the subject, so revisit those posts for some ideas. As bacterial sequencing is still kinda spotty, use your symptoms as a guide for tracking the effectiveness of your interventions. Good thing is that feedback is fast.

The inability to “go” is a potent cause of bloating. I’d argue that it’s even worse than gaseous bloating because solid things are just sitting there. They aren’t moving, they’re accumulating. And as long as you’re eating and digesting, more is always arriving. This creates a terrible bloat. A heavy bloat. A physical bloat that can’t be relieved with a few well-placed farts or burps.

Check your fiber intake. Both too much and too little can cause constipation. Explore resistant starch, prebiotics, probiotics, and fermented food. Fermented dairy (yogurt, kefir) may be of assistance.

Without adequate stomach acid, alkaline bacteria who’d normally be unable to establish themselves are suddenly free to set up shop. If you recall what I wrote several paragraphs back about SIBO, you’ll know that this leads to poor carbohydrate digestion and successful delivery of fermentable short-chain carbs to the colon for gas production.

Stomach acid also promotes the secretion of carb-digesting enzymes in the intestines. If stomach acid is low, those enzymes run low, too, and it’s harder to digest carbohydrates. More carbs make it through for colonic fermentation (and gas production) in the context of low stomach acid.

It could be said that bloating causes GERD, as the presence of gas in the gut can distend the stomach and exert sufficient pressure to push its acidic contents up into the esophagus.

Betaine HCL can restore stomach acidification in certain conditions. Apple cider vinegar (a couple tablespoons mixed in a cup of water) can also help here. Going low-carb, thereby reducing the amount of carbs available for fermentation, has also been shown to improve symptoms of GERD.

10. Eating and drinking too quickly

For the same reason gulping kibble can cause bloat in dogs, eating your food too quickly can cause bloating in humans: it increases the likelihood of swallowing air.

Eating a massive meal is a great way to feel bloated. I mean, you’ve literally filled your GI tract with food.

Eat smaller meals. Eat till satiated, not until you hate yourself. If you’ve eaten a large meal, take a walk.

Creatine is one of those supplements with few downsides. It just works (unless it doesn’t). But part of the reason it works can also cause perceived bloating. Creatine promotes increased intracellular water storage, or water retention. As this water isn’t available for body-wide thermal regulation—it “sticks around”—and can give the impression that you’re bloated. The evidence is quite mixed on this one, but the preponderance of anecdotes from people complaining about “creatine bloat” makes me think there’s something going on. Even if it doesn’t show up on objective tests, if you think you’re bloated, you might as well be.

Stick with it. Creatine takes some getting used to. Most “creatine bloating” is due to the increased water retention being a new sensation.

What did I miss, folks? What are the common triggers for bloating in you? How do you deal with them?