I have been intending to submit my success story for the last few years, and I now realize why I was waiting. Even though I have lived Primally for the last 4.5 years I only decided to become a Primal Blueprint Health Coach and start a Primal wellness business in the last several months.

A chiropractor told me about Mark’s Daily Apple in August of 2010. I signed up immediately for the ‘weekly’ email, which turned out to be daily. I loved that pace of information flow. After 14 months of reading all I could from Mark’s Daily Apple, and independent researching, I finally believed those postings to have merit. The success stories carried the most weight, as I could see how others benefited from going Primal. The stories of others who were similar weight and had similar health issues were the most compelling to me. I thought people who lost 180 lbs in 1.5 years, or 65 lbs in a year, had to starve and work out for hours several days a week. Boy oh boy, do I know otherwise now!

I had lower back surgery in 2004 and had to wait six months laying on the floor until my surgery date. Typical of the “free” universal “health care” system in Canada. I gained 60 lbs in six months, because eating made me feel better. I ate a LOT of crappy food in that six months. After surgery, pain levels were greatly reduced, but I still had 30% – 70% of my muscles not receiving nerve signals properly. I took a sedentary job and gained five lbs a year until I was 309 lbs on October 21 2011. The date my tipping point finally tilted and I became Primal. I was 50 years old. 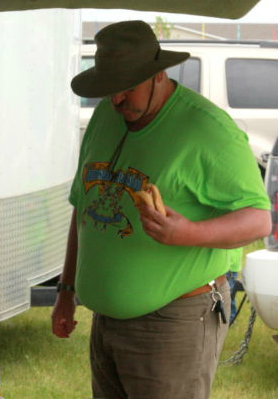 A few years prior to that date I had been going to my family doctor because of my rapidly declining health, and worsening of blood sugar and blood pressure. I was an untreated type II diabetic with A1C being at least 8.6 for about 1.5 years. Being told that I must start taking Metformin for type II diabetes, and that I would eventually transition to taking insulin by needle, was my ’tipping point.’ I had noted higher blood sugar spikes after whole wheat bread, or seven grain hot cereal, and less severe spikes after a dozen perogies and a few cabbage rolls. A typical Saturday breakfast would be a triple portion of seven grain cereal covered with 3/16” of Demerara brown sugar and I would still be hungry, even though I consumed a ton of calories. I would follow that up with half a large bag of ripple potato chips and be somewhat less hungry, but still not satiated. Wolfing down a couple of sandwiches 90 minutes later would keep me going until supper. I now realize that my body stayed hungry until sufficient nutrients were provided, not calories!

A (not so) quick rundown on my health changes. I was keeping track of my blood sugar two to five times a day when I made the Primal transition. Type II Diabetes was gone in three days. I also eliminated acid reflux, gouty arthritis, obstructive sleep apnea, seasonal allergies, plantar fasciitis, carpal tunnel, nerve cluster on knee, skin tags, and mood issues. Blood pressure before was 145/110 and dropped after one month, and again at month eight. Now blood pressure is typically around 108/66. I used to get sick three to four times per year, ear infections, sinus infections. I have not been sick since going Primal. Used to take four prescription medications, now zero. My chronic leg pain was mitigated by going primal and I was able to drop the prescription for that condition. Blood vessel cluster on ‘bad’ right ankle is 98% better in appearance. Not as attractive to mosquitoes and don’t sunburn nearly as easily. Fingernails grow faster and don’t split/flake. Long beard does not get split ends. Dry (elbows) and oily (forehead) skin resolved. Ability to handle stressful situations has become amazing! Recall from memory greatly improved. I used to have one or two cavities every year or so but haven’t had a single cavity in 4.5 years. Also had recalcification of two teeth that were flagged as a concern the year before going Primal. No teeth concerns now. One thing that I did not expect was dreaming! I went from six ‘blockbuster’ dreams a year to now having five a week. Could someone please come up with a way to record these dreams for later playback. I can’t believe how creative my dreams are! 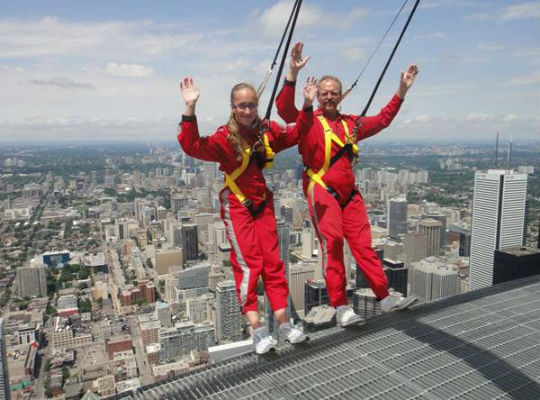 With my daughter on the Edgewalk at the CN Tower in Toronto July 2012. This is eight months after going primal.

Remember that I have significant permanent nerve damage to my right leg, so exercise was not an option. Without any exercise I still lost 99.5 lbs. in year one. Weight loss stalled a few times in year one and I found that if I ate MORE, that the weight loss resumed. I came up with a chocolate bark recipe (unsweetened chocolate, unsweetened coconut, almond butter and maple syrup) that is loaded with saturated fat and calories, but I lost more weight by consuming a slab of it every week. I also found that eating more garlic, onions, mushrooms and blueberries would speed up my weight loss.

People always say that being overweight causes health problems. There is a correlation here but certainly not a causality. My body stopped losing fat three weeks before year one concluded. My body determined that this is my quiescent point. Insurance companies still consider me fat because their charts say I should weigh closer to 170 lbs. The fact that I went from 44” waist pants with a huge belly hanging over to 36” pants with a tiny belly doesn’t matter to them. Going from 2XL shirts to L shirts doesn’t matter to them. Going from 54T suits to 48T suits doesn’t matter to them. They don’t take skeletal frame type into account.

Eating Primally, as expected, my LDL cholesterol was flagged as being high (outside normal range). My HDL numbers also increased so my ratio is still fine. My triglycerides are not a concern. I have told my insurer about testing for LDL particulate size, but they don’t believe in that at all. I did not inform my family doctor of my Primal change. I saw him four months after the switch and my A1C was 5.0. I had lost 50 lbs at that point. He asked what was improving my health, and, despite being a vegetarian, he urged me to continue my lifestyle change. At my annual physicals my A1C continues to be 5.0. My doctor said that he was involved in cholesterol studies a few decades ago and 73 types of cholesterol were identified. He said that researchers don’t have any idea what types are good/bad nor what levels are optimal. He knows about the LDL particulate size science, and is not concerned with my results. 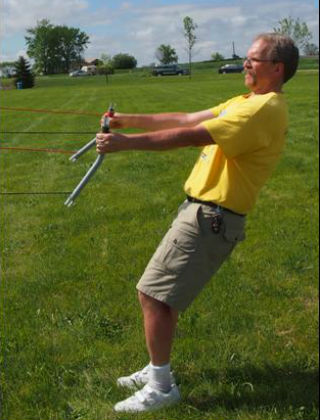 After year one I was able to start exercising a bit and now walk (barefoot) on my treadmill while watching Discovery channel programs. I also do some pushups and side/front/back planking, but lower back pain limits how much I can do. Flying my large kites is a good ‘play’ workout and doesn’t feel like a workout at all. After having all those endorphins released all day long from this fun kite flying activity (and not feeling much pain), I certainly pay for it that evening. I don’t use any medication to help this and usually am back to normal after a nights rest.

I did not realize until a few months ago that becoming a Primal Blueprint Health Coach and starting my own business (at age 55), was going to be my future. I am committed to educating other people to take the reins of their health and show their friends, relatives and co-workers how you don’t have to depend on the ‘health care’ system to survive. You can THRIVE on your own, just by living a Primal lifestyle.

I have now been living Primally for 4.5 years and have never had the urge to go back. You do need a ‘tipping point’ to switch to being Primal and even have a reason to continue being Primal. It is amazing to be able to go a day without eating and not get distracted by hunger, because my body knows how to burn body fat for calories. I usually have two meals a day, but I LOVE TO EAT and it is that, and not hunger, that brings me to the table. I followed recipes for the first few years of being Primal, but now have become quite the improvisational cook and have come up with some amazing (and some not so amazing) meals. Kabocha squash has become my favourite vegetable. Roasted on a pan that has been wiped down with lard and then a sprinkle of sea salt when done. I am quite sure that my ancestors from the United Kingdom did not have the pleasure of this vegetable. A typical plate is 2/3 assorted vegetables and 1/3 meat. High fat plain yogurt with blueberries and maple syrup is a favourite snack.

After learning about the gut biome and then the mouth biome, I have been doing some experimenting with brushing my teeth with water only for the last 5 months. I went for a routine dental cleaning 4 months after starting this experiment and they said I had no more buildup than I used to have pre-primal.

What has surprised me is the hostility of family members when I try to nudge them into a direction where they can better their health. You would think that my example would be powerful enough. My wife, 18 year old daughter, and 23 year old son have a host of health issues, and two of them are taking prescription medications. Arthritis, thyroid, lymph issues, migraines, gall bladder issues, depression, mood and gut issues aren’t enough of a tipping point for them. Luckily, my 20 year old son is about 70% Primal and has no health concerns. 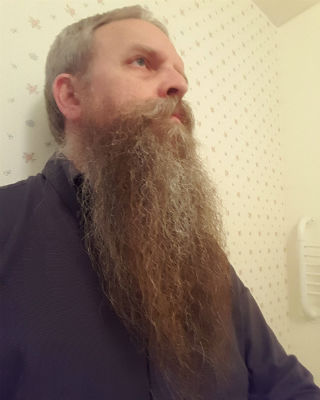 Here in Canada, health care is ‘free.’ We pay for it in our taxes but we don’t have any costs at the doctors/hospitals. Pharmaceuticals are usually covered by provincial plans or benefit packages at work. People don’t think drugs cost anything but they are a burden to our provincial governments and employers that fund these benefit packages. Because of these two situations it is hard to convince people to switch for financial reasons. They say that it will cost more for food and they will be spending more money by eating well. I have calculated that it does not cost any more money to eat well, but I do spend an hour or two every other day cooking up large meals that I can spread over the next several suppers/lunches. Cognitive dissonance is a constant, as I mostly eat conventionally raised meats and non-organic vegetables/fruits because I would otherwise get an earful about how much I spend on food. The focus should be on why SAD food is so cheap, not why REAL food is more expensive.

It was only a few months ago that it dawned on me that my mothers maiden name, Spearman (spear-man), aligned with grok throwing a spear. Coincidental? Yep, but makes me chuckle.

I never had a bucket list until reaching age 50. I decided to grow my first significant beard.

Here is a picture of my beard at two years along. Not sure how Grok that is, but it certainly makes me less forgettable.