10 Tips, Suggestions, and Projects for Improving Your Mastery Over Nature 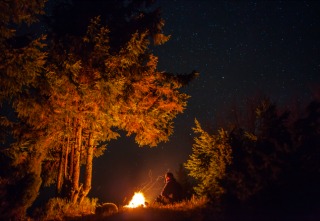 Humankind’s home is in the wild. It’s where we spent our formative years. Even today, well after the advent of civilization, industrialization, and computerization, almost half of humanity still lives in rural areas. That close relationship to the land is probably why green and blue spaces offer so many health benefits, like lower stress and improved immunity. Going for a hike or picnicking on the beach is much like going home.

Yet we don’t simply exist in nature. We shape it. We’ve always shaped it, from ancient Amazonians building food forests to Neanderthals offing entire herds of mammoths at a time. We start fires, systematically hunt and consume its inhabitants. We make gardens—blends of nature and culture. In effect, we impose our will.

Imposing one’s will on the great outdoors has an understandably bad connotation. Sometimes our interactions with nature result in waste and abuse on either a personal and expansive scale. Nothing irks me more than seeing heaps of trash left behind at campsites or photos of the 19th century American buffalo massacres. But the human agenda can also be thoughtful, inspired, even fruitful. Without humans imposing their will on nature, we wouldn’t have the National Parks (thanks, Teddy and Woodrow), stable animal populations (thanks, hunters), or the millions of miles of hiking trails across the world. You can argue the subject for years and never come to a consensus, but it’s pretty clear that a ton of high quality wilderness, both touched and untouched, exists for our enjoyment thanks to some of the more visionary choices within human intervention.

I’ve suggested you camp in the past. I’ve encouraged you to hike. I’ve even told you how best to optimize your hiking. I’ve described the myriad benefits of spending time in nature. Today, I’m going to discuss how to interact with nature without destroying it. How to dig into it, meet it Grok-style. How to feel at home in your true home.

Always shirtless and slightly grey from clay residue, the anonymous star of the Primitive Technology YouTube channel has been making huts, tiles, tools, weapons, ovens and other technology using handmade tools and natural materials gathered in the Australian bush for several years. His instructional videos are well-shot, with no talking and no music. Enable closed captions for added details. He even figured out how to make iron last year.

It’s best to try some of the things he makes, but you can also tune in for inspiration with other, less primitive things using modern, store-bought tools. The display of human ingenuity is worth watching.

Get good at chopping wood.

Wood chopping is the perfect example of an effective imposition of human will on nature. You’re taking an unrefined, raw resource and making it more useful without changing its essence or chemical composition.

This is a good all-around axe for chopping wood.

It also turns out to boost testosterone. Carrying water is optional.

Figure out how you prefer to build a fire.

The last thing you want to do when tasked with starting the fire is vacillate between fire-building methods. It should be second nature. You should operate on pure muscle memory. If that’s not the case, it’s time you figure out how you prefer to build a fire.

The basic method is the tipi: building a small tipi of kindling surrounded by tipis made of progressively larger pieces of wood.

My favorite method is the roofless log cabin. You need a big fire pit to do this, and it consumes a lot of wood, but it really creates a hot flame and, if you plan on cooking over it (see the next section), great embers in a short amount of time. Start with two large pieces across from each other. Stack two more across the top on the other sides, forming a square. Continue until you’ve got a 1-2 foot structure. Then, place a small tipi inside the “cabin” and light it.

Some people build a roof of logs to contain the flames and provide more fuel, but I love the visual of flames spilling out the top. It also burns quicker this way, which is good if you need embers for cooking.

Practice building fires and figure out which way works best for you and your goals. Then get really good at building them.

Learn about foraging, then go foraging.

A little knowledge turns wild plants into human food. It might not be totally accurate, but you’ll at least feel like you could handle yourself alone in the wild.

Go on foraging trips with local experts. I guarantee they’re out there wherever you are.

Check the bulletin board at the local outdoor store.

Look for foraging groups on Meetup or Google.

Grab some foraging books from the library or Amazon. Be sure they apply to your area.

Be careful, of course. But don’t let caution paralyze you. I suspect we won’t see very many more Christopher McCandlesses. The breadth of and access to wild food knowledge is too great.

Cook outside over fire.

When we’re cold, we can turn on the heat. When we want to cook something, we can use the microwave, turn a knob and get the perfect flame, or set the oven to a specific temperature. If we need light at night, we flip a switch. We don’t need raw fire for these things anymore. Today, fire is a luxury, a frivolity.

We can certainly get by without direct exposure to fire, but I don’t think we should. Fire burns within us, and I’d argue within our very DNA. It’s why fire engrosses us and the campfire can coax stories and good conversations from those who gaze into it. Cooking is the most powerful and primal way to interact with fire.

Most people mistakenly assume camp fare has to be substandard. They’ll eat canned pasta, freeze-dried meals, garbage breakfast cereal. Even Primal folks aren’t immune; all of a sudden they revert back to the Standard American Diet just because there’s no stove or refrigerator. Nonsense. Cooking in the wilderness is the best.

Get comfortable with the tempestuousness of fire.

Cooking over a wood fire is more art than science, and you have to embrace that.

It won’t be the same each time.  You can’t reliably attain “medium high heat” or “425° F.” Open fire doesn’t work like that. Hold your hand over the embers. If you can only manage one second or less, that’s “high heat.”

But even that’s more a guideline than a rule. The key is that you have to practice. You have to get out there and actually cook over fire to learn how fire works. You’ll burn some stuff. You’ll ruin a few meals. That’s okay. Experience is the only teacher that matters.

Don’t fly by the seat of your pants, though.

Cooking over a wood fire is still cooking. Planning matters, especially if you’re doing your wood fire cooking away from home.

Know what you’re going to make for each meal and assemble everything you need the day before.

Prep the ingredients back at home—or not. There is something rustic and gratifying about doing meal prep at camp, fire crackling beside you, chopping veggies directly on the wooden table.

Get (or chop) firewood before you reach the sticks. It’ll be more expensive if you buy on site, and gathering wood is usually illegal. Hop on Craigslist or Yelp to find a vendor that sells in bulk and fill a trunk. I like almond wood for cooking.

Get yourself some cast iron.

For my money, cast iron is the only way to cook outdoors. It’s impervious to heat damage. It holds heat incredibly well. It looks gorgeous gleaming black against a raging fire or glowing embers. There’s no material better for searing a steak.

You’ll want a Dutch oven for stews, chilis, and soups. Enameled works great if you’re worried about getting too much iron from acidic foods.

You’ll want a portable grill. This portable Tuscan grill is the best widely-available option I’ve seen. It’s a 14×14 cast iron grill with legs that screw on. You can plunk this thing down directly over embers, or remove the legs and lay it across an existing grate. Buy two or more to boost your cooking surface.

You’ll want a large cast iron pan. Francis Mallmann, an Argentine chef featured in Netflix’s Chef’s Table (watch the trailer of his episode, then go watch the actual episode), suggests a chapa—a large cast iron surface about 30 inches by 30 inches set on legs for placing directly over embers. Get one of those if you can. You’ll likely have better luck finding extra-large cast iron griddles.

Mallmann also roasts whole lambs and pigs on the Patagonian cross, a 6 foot tall vertical piece of iron with two parallel crossbars and a sharpened end that sticks into the ground in front of the fire. If you’re really gung-ho, find a metal shop near you, draw up some plans, and have them build exactly what you want.

Try cooking over embers, not flames.

Manning the grill as flames lick up and char your food is a romantic image, but it’s not the best way to cook with wood. Embers are far hotter and produce less smoke and more reliable heat.

Once you’ve got a nice fire going and embers and ash are accumulating, move a blend of hot ash and embers to the side of the fire and bury your thick skinned vegetables. Don’t wrap them in anything. They can take it. Winter squash, sweet potatoes, regular potatoes, onions. I’ve even buried a pineapple—rind on—to great effect. Just throw it in and come back in an hour.

You don’t have to backpack for five days through untamed wilderness to explore these concepts, although you should make a point to get away as often as it’s feasible. Most of these can be practiced and enjoyed in your own backyard. After all, nature is everywhere. There’s no escaping it, so get out there and embrace it.

How do you embrace and tame—or at least attempt to tame—nature? Got any tips or suggestions? Has anyone else out there got the wood fire cooking bug like me? Something about it that just feels right… Take care, everyone.