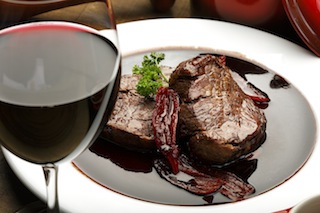 Some foods and flavors are just made for one another. Bacon and eggs. Strawberries and cream. Basil and tomato. Oil and vinegar. Sweet and sour. The list goes on and on. But what’s behind these classic and nearly universal combinations? Does taste alone drive the decision to, say, add fresh herbs to a charred piece of meat? And if pairings are driven by taste, which sounds reasonably, could it be possible that healthy pairings naturally taste better because we’ve evolved an innate draw towards these powerful combinations? The jury may still be out on that one. Nevertheless, some foods, when taken together, make surprising nutrition sense.

Some cultures, like Jews, severely restrict their pairing, going so far as to bake it into their scriptural doctrine. Others, like the Masai and the Mongolian nomads, base their diets on meat and milk and actively eat the two together. Are these just arbitrary religious or dietary prescriptions, or is there something more going on?

Let’s speculate. Ancient Israelites, the ones who actually wrote the scriptures, were settled agrarians. They ate lots of grains and while they kept animals, they were more useful as sources of renewable calories — milk — than meat. But the thing about dairy is that it contains calcium, which is a potent inhibitor of iron absorption. What little meat they did eat had to be consumed without iron chelators to maximize iron absorption and utilization.

But iron can be dangerous in excess. People with hereditary hemochromatosis, or iron overload, are at an elevated risk for heart disease, cancer, and early death. In societies like the Masai or the Mongols for whom meat was a staple, regularly eating it with dairy likely modulated the amount of iron they absorbed from their otherwise iron-rich meals.

I’m not suggesting this explains the dairy-meat restrictions in the Torah or the dietary habits of pastoral nomads. It’s just speculation. But the fact remains: dairy chelates the iron in meat when the two are eaten together, and this can be a positive or negative health effect depending on your iron status.

Although I only occasionally drink anymore, and I don’t really go for pounds of steak in a sitting, whenever I do sit down for a juicy grass-fed rare ribeye or NY strip, I make it a point to pour a glass of some big spicy red. A cab, maybe a zin or a syrah. I can’t not have wine with good steak. The two are just made for each other, right? Almost as if there’s something more to it than mere taste.

As you probably know, cooking meat can form carcinogens. These carcinogens become more prominent and numerous when meat is cooked too long, at too high a temperature, or without adequate preparation using antioxidant-rich marinades. What if the cooking’s out of your hands and you’re forced to eat what others have prepared? What if you’re faced with a charred steak?

Drinking red wine with your meat can inhibit the activity of cooking carcinogens in your stomach. It’s probably far better to avoid forming carcinogens at all, but red wine is a nice insurance plan if you can’t avoid them. Plus, it’s delicious.

Another must-have addition to a steak dinner is something green. Spinach, broccoli, kale, asparagus — if it’s green and comes from the ground, I’m all over it. Turns out that another way to inhibit the activity of charred meat-borne carcinogens in the stomach is with green vegetable consumption. Namely, the greens and the crucifers. Both cruciferous vegetables and salad greens reduce the damage wrought by heterocyclic amines formed during cooking meat.

It could be avocado. It could be a piece of fatty meat. It could be a handful of nuts scattered amidst the leaves. It could be your basic olive oil and vinegar dressing. Whatever you do, eat your raw vegetables with a significant chunk of healthy fat to maximize nutrient absorption and assimilation. Salads are healthy so long as you eat them the right way.

Sushi rice spiked with rice wine vinegar (or allowed to slightly ferment). Sauerkraut and bunned brats. Pickled vegetables before Korean bbq. In many, perhaps most cuisines, acids (vinegars, citrus juices, fermented foods) are traditionally served either before or with a starch. Part of it is because doing so is delicious. Kimchi goes great with grilled short ribs and a little white rice. But these traditions may also have health benefits.

As it turns out, consuming acidic foods alongside or before starches reduces postprandial blood sugar. Pickled vegetables consumed before or during white rice consumption lowers the blood sugar response by 27% and 25%, respectively. Vinegar itself, regardless of the origin, lowers the blood sugar response to a carb-rich meal, improves the glucose tolerance, and even increases the satiety of a meal when taken before or during the meal. And according to a recent study of type 2 diabetics, simply consuming vinegar can reduce the postprandial glucose response and increase glucose uptake of skeletal muscle in type 2 diabetics.

Anytime turmeric appears in a national cuisine’s dish, black pepper’s not far behind. Curry employs liberal amounts of each, enough that it’s not really curry without both. So next time you add turmeric to something — soft boiled eggs, perhaps — add a nice big pinch of finely ground black pepper. I guarantee it will taste better and be better for you than either spice alone.

Turmeric gets a huge amount of press for its health benefits. The most famous turmeric component is curcumin, which forms the basis of most turmeric health supplements. But here’s the thing about curcumin: we can barely absorb it without exogenous agents. And the most popular bioavailability-increasing agent is piperine, a component of regular old black peppercorns.

From Indian curries to Mexican carne asada, Moroccan tagines to American chili to Northern Chinese lamb, coriander and cumin are popular spice pairings across a wide range of world cuisines. Might special synergistic properties arise when one combines the two spices?

Yes. Alone, cumin is a powerful spice with many health effects, mostly owing to its polyphenol content. I’ve already written about cumin and its anti-diabetic, hepatoprotective, and hypocholesterolemic effects. And coriander has been shown to improve blood lipids, lower postprandial blood sugar, and display powerful antioxidant and anti-carcinogenic effects.

When you combine cumin and coriander, interesting things happen. Antioxidant activity is magnified. The combo is also a potent antimicrobial agent, more effective than simply adding the individual effects of each spice together. Importantly, cell line and animal studies showed that this combination, while being more “powerful,” displayed no toxicity. A variety of essential oils, herbs, and spices were studied, but the cumin/coriander combo was the most synergistic.

Primal? Not exactly, unless you’re using flint tools to shave wild cinnamon bark into a bowl of evaporated sugar cane condensation. But the combo does taste really, really good together, and there may be a nutritional justification for that fact.

Cinnamon lowers blood sugar by a couple different mechanisms. First and probably most importantly of all, it improves insulin sensitivity and reduces insulin resistance. But cinnamon also reduces absorption of consumed carbohydrates by inhibiting some of the digestive enzymes that break down incoming carbohydrates. It even contains an insulin mimetic, a compound that acts just like insulin in the body. In short, cinnamon improves a person’s ability to tolerate, metabolize, and handle sugar — the very substance it goes really well with.

Although some cuisines leave this step out, a primary step of any good Indian or Thai cook is to toast the spices in cooking fat before anything else. In Indian cooking, they’ll often start with whole mustard seeds toasted in ghee or coconut oil. For the first step of making good Thai curry, they’ll cook the curry powder in oil to create a paste. The reason cooks do this is to release oleoresins, full-flavored fat-soluble spice extractions. After the oleoresins have been extracted and the rest of the ingredients are added to the mix, any water-soluble spice compounds are also released upon further cooking.

Anytime I cook meat, I’m making a sauce to go along with it. Maybe it’s a reduction, where I reduce bone broth to a syrup before adding fat to thicken and enrich. Maybe it’s a gravy, where I scrape up the browned bits from the bottom of the pan, add broth, reduce, and sometimes finish with a safe starch (potato starch mixed in water to form a slurry works really well here) to really thicken it. Also, simply braising a gelatinous cut of meat produces a thick sauce by the end, no extra work required. I’ll often add an acid (citrus juice, wine, vinegar), too. These sauces really enhance the meal.

See, muscle meat (steaks, roasts, ground beef, etc) is high in an amino acid called methionine. Methionine is essential, meaning we can’t synthesize it in our bodies and must consume it in the foods we eat. We need it to build muscle and maintain health. But our methionine intake must be balanced with enough glycine, another amino acid. Methionine toxicity is countered with glycine consumption and the simple addition of adequate glycine to a mouse’s diet mimics the life extension mice enjoy from methionine restriction. Overall, methionine in the absence of glycine can be described as “inflammatory.” Glycine is most abundant in connective tissue, bones, and gelatin. Bone broth-based sauces are probably the easiest and most delicious avenues for glycine consumption.

I just love stuff like this. The world can be confusing and contradictory and chaotic, but sometimes it’s nice when things just sort of fall into place and make sense.

Okay, now I’m hungry. Take care and be sure to leave your favorite food pairings down below (plus, any health benefits you think they might confer)! Maybe there’s even another post on the topic, if we get enough potential pairings to investigate.

Thanks for reading, folks.

Keto on the Trail: What Food to Pack for Primal and Keto Cam...