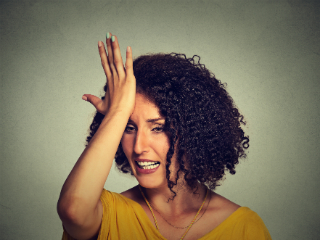 Sometimes eschewing conventional advice goes too far, though. Sometimes we make serious blunders in our pursuit of Primal perfection.

Bacon is the forbidden food. It beguiles vegans and tempts die-hard low-fat statin-munchers. So when you learn that bacon won’t kill you, your bacon intake tends to climb. After all, it’s delicious. No one disputes that. But that doesn’t mean you should eat bacon for breakfast, lunch, and dinner. That doesn’t mean bacon should be your primary protein source. You don’t need to gorge on it.

These days, I treat bacon more like a condiment. Chop it up and sprinkle it on salads. Sauté it with Brussels sprouts. Toss it in with roasted sweet potatoes and apples. And yes, I love a good slab of it with some eggs, but not all the time. Don’t be like the college freshman getting drunk at 10 AM in his dorm because his parents aren’t there to stop him.

When you realize that dietary fat can be a force for good—improving nutrient absorption, increasing satiety, upregulating fat metabolism and fat adaptation—and excess refined carbs a force for fat gain, you increase the former and lower the latter. But realize that otherwise healthy fats like butter, coconut oil, olive oil and avocado oil are still refined foods. They’re removed from the source. They’re concentrated. And they should probably not comprise the majority of your calories. Now, these Primal isolated fats are far more nutrient dense than the isolated PUFA-rich fats we avoid (your corn oils, your soybean oils, your canolas) but they can’t compare to fatty whole foods like eggs, ribeyes, avocados, nuts, or seeds. Get most of your fat through foods like avocados, nuts, meat, fish. Reserve fat for cooking. You can still eat a high-fat diet without relying on a quarter cup of coconut oil.

I like a good Primal-approved treat—when the situation calls for one. Almond flour, coconut flour, and other gluten-free nut-based flours can be useful and versatile allies when these situations arise, but as a regular staple food? Eating Primal is about more than just the ingredients. We’re trying to change our relationship to food, not replace the junk wholesale with slightly healthier junk. That’s the province of the gluten-free dieter swapping out Oreos for Oreos made from rice flour and wondering why they gained all that weight.

Dark chocolate is absolutely a healthy food. Dozens of studies support it for heart health, mental function, and anti-inflammatory activity. And once you hit the 85% cacao and up range, you’re getting a nice dose of prebiotic fiber, cacao polyphenols, healthy cocoa fat with moderate amounts of sugar. I got nothing against a nice piece of quality dark chocolate. Eat it several times a week, sometimes more.

Explore other avenues for cocoa ingestion. Look into cocoa powders. Make hot chocolate (use coconut milk if you prefer). Incorporate cocoa into your cooking (Oaxacan mole sauce, anyone?). Try unsweetened full-cacao baking chocolate. The sugar is just a way to get more people to eat what is essentially a bitter, initially unpalatable bean. If you can use unsweetened cocoa and control your own desired level of sweetness—or better yet, get used to unsweetened cocoa—you won’t be missing any of the benefits.

The dermatologists aren’t all wrong. The sun is a powerful force. With the right exposure, it’s a force for good, reducing the risk of many cancers, improving cardiovascular health, building stronger bones, promoting proper sex hormone function, building happiness, and leaving your skin glowing. But with too much exposure, or exposure at the wrong times, all those hysterical warnings about the sun and skin cancer can actually come true. You don’t want to get burned. You don’t want your skin peeling. You don’t want irregular moles and spots appearing and shifting on your skin. They’ve put millions of people at risk with their zero-tolerance stance on sun exposure, but too much sun can actually be dangerous.

Beef jerky’s awesome. Skin jerky? Not so much. Make sure you’re doing all the right things before you start laying your naked body out in the sun.

Chronic cardio is bad for most people. It’s boring. It sucks the life out of you. It hurts your joints and relationships. And it’s not even very good at reducing body fat and improving body composition. You can get many of the same benefits and a ton of new ones in a time-efficient manner by increasing the intensity and reducing the volume of your workouts. If you aren’t getting paid to do it, don’t do it. That’s settled.

However, a jog around the block isn’t going to kill you. Not all cardio is chronic. Chronic cardio describes the moderate-high intensity, high-volume training people think they have to do to “get fit.” A nice easy jog is fine. A long hike is great. The occasional race-pace longer run is helpful.

Maybe it’s just running a mile every once in awhile. But you don’t have to go hard all the time. There are other worthwhile exercise modalities besides strength training and sprinting.

7. Going down every rabbit hole

On this blog, I discuss a lot of concepts. I’m a curious person and I have a large readership, so whenever I come across an interesting new idea or think of a new approach to an old problem, I share it here.

You don’t have to try everything you read about. You don’t have to go into ketosis, fast, do carb refeeds, try every single permutation of squat and deadlift, sprint uphill/downhill/on a bike/in a pool, hike barefoot, and try the potato diet. These are all just options, choices to be made. I provide information, offer my interpretation, and make suggestions. I don’t expect everyone to do everything. That’s impossible. That’s a recipe for added stress and certain failure.

Some things about our modern existence are screwy and ridiculous, and when we spend our days sitting down, completely isolated from nature, from other humans (in the flesh), from edible plants and animals in their original packaging (absent some fur, perhaps), problems arise. You can’t expect that ignoring the reality of the environmental inputs that shaped our genome can lead to anything but poor health and happiness. Finding modern corollaries that create some of those same environmental inputs really seems to help solve most of our health and lifestyle problems. “Grok” is a helpful frame of reference.

But you don’t need to wear a loin cloth. You don’t need to leave the city and build a home in the forest using primitive skills (that’d be pretty awesome as a summer home, though!).

Doctors, by and large, want to help you. I would take their lifestyle and diet recommendations with a large slab of Himalayan rock salt, but they’re great technicians. They’ll keep you alive when you have a heart attack, fix a broken bone, remove torn cartilage from your knee, pull a tooth, stop an infection, and save the lives of mother and child during a difficult birth. And sometimes meds are necessary. Do your homework. Don’t take their word for everything. They aren’t omniscient. But don’t ignore them, either.

Being Primal is about taking advantage of both ancient traditional wisdom and modern science. We have the best of both worlds at our disposal. Take advantage.

10. Buying too many things

This isn’t exactly the most self-serving. I sell supplements and Primal Kitchen fare, and I’m damn proud of all of it. But these are supplements to an already healthy diet. They’re meant to buttress anything missing from your diet, to support you when you can’t quite get the nutrients you need. They’re insurance.  And the mayo, avocado oil, and salad dressings I sell aren’t replacing real food; they’re enhancing it. They’re making tuna taste better. They’re giving you a reason to eat more leafy greens. They’re providing a way to healthfully sauté your meat and veggies.

If you find the Primal/paleo way of life is leading you to buy more things and eat more processed food, it’s probably the wrong way. At its heart this movement is about eating real food and enjoying life.

Any of that sound familiar? Fess up. What mistakes are you making? Also, which other common mistakes do you see Primal folks make?

Why You Care What Other People Think (and 5 Ways to Knock It...