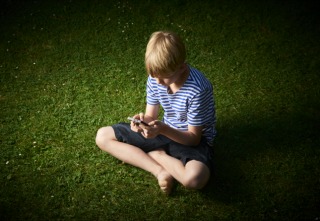 There are many reasons to be thankful for the cushy existence modernity affords us. War and other extenuating circumstances aside, you probably don’t fear for your life on a daily basis. You have clean water to drink. Food is widely available, and it’s affordable. You survived infancy, childhood, and adolescence, which is quite special on a historical scale.

But there are downsides. Food has gone industrial. We increasingly live our lives in the digital realm and ignore the physical. Perhaps the most recent change relative to that shift has been the physical neutering of our kids. This has happened more broadly across all ages as countries shift away from manual labor toward more of an information economy, but it’s become incredibly pronounced in the generation coming up. At least when I grew up kids still wandered the streets in search of adventure, testing themselves out physically, undergoing mental and physical challenges, breaking bones and straining muscles, and learning about movement from the best teacher of all—hands on experience. Now? The lucky ones will get gymnastics or martial arts or dance training a couple days a week. But most languish indoors, prevented from the kind of free-form exploratory play human children have enjoyed for thousands of generations.

What are they losing? What physical skills —basic human abilities—will they lack?

The recent complaint from an Army general illustrates this nicely: New recruits are so terrible at throwing grenades that they’ve nixed the requirement for graduation altogether. And it’s not just a strength thing, although I’d imagine that’s often a problem. It’s a technique thing. They didn’t grow up throwing.

Throwing on a regular basis when your brain is still developing establishes stronger neural pathways that persist into adulthood. It’s why learning languages and riding bikes “sticks” more when you do it as a kid. Throwing is no different.

Throwing is a human universal. Hell, the ability to lead a target, to subconsciously triangulate all the variables and figure out where to throw in order to hit the running antelope (or streaking wide receiver) is uniquely human. It may have made being human possible. We have those long arms, hyper mobile shoulders, upright postures, big brains, and powerful posterior chains that allow us to generate incredible power on and accuracy with our projectiles.

Today, kids carry their mandatory iPad to school and complain when Mom or Dad tries to get them to help with yard work.

The world is unstable. Things teeter. They get wet and slippery. Sometimes the walking surface is too narrow for our feet, or for more than one foot at a time. We need to be able to traverse it safely and effectively.

Ideally, kids should seek out these unstable, narrow surfaces. Park bench? They should hop on and walk along the back. Curb? Way better than a sidewalk. But their attention is elsewhere, and I think it’ll come back to bite them in the future.

I did a lot of impromptu climbing as a kid. And not just large rocks, trees, and mountains. I’d climb fences, so many fences. There were multiple ways to scale a chain link fence. My favorite was going head first and flipping over onto my feet followed closely by perching along the top and jumping down.

Can’t recall the last time I saw a kid climb a fence, let alone a tree. Climbing gyms are growing, so there’s a real desire for it. Rock climbing is a different beast though. It’s more methodical and strategic. What I’m interested in is the ability and confidence to just get over barriers. You see an obstacle. You climb it, without really thinking or planning. There’s a metaphor in there somewhere.

Jumping is an act of faith. In your own abilities. In the stability of the landing surface.

You can see it in kids who’ve never quite jumped before. They approach the edge, look down, look over at you, look back down. They pump their bodies, priming for the jump. Their eyes get a glint of anticipation. They know it’s a big thing, the first jump. A momentous occasion. Then they leap, and it works, and they’re hooked. They’re believers.

A jump is an explosive hip extension, utilizing the glutes and hamstrings. You know, the muscle groups that grow flabby and atrophied when we sit down all the time.

The most important part of jumping is the landing. Landing correctly protects your joints from injury and allows you to smoothly transition into the next movement (running, jumping again, dodging). It’s a foundational skill for most sports and non-sport athletic endeavors, like dancing or parkour.

How many broken hips, sprained ankles, and knee injuries are coming down the line for future adults who never learned how to land a simple jump?

Bouldering is great and all. Rock climbing is fun. But my favorite thing to do on and around large deposits of rocks and minerals is scramble up and down them. You go without any equipment. No special shoes. No fanny pack full of chalk. No ropes. And unlike the insane free climbers, no real risk of death and dismemberment.

Rock scrambles get you into situations hairy enough to get your blood pumping and force you to reckon with your own mortality, but manageable enough that you can usually get out without adult assistance. That’s a huge thing for kids to experience—the realization that life can be dangerous and risky while still worth doing.

One of my favorite pastimes as a kid was walking up and down creeks by jumping from rock to rock, making sure never to touch ground. We’d sometimes do creeks miles long this way. This is no easy task. You have to be willing to go barefoot (or sacrifice grip and stability and risk getting your shoes filthy). The rocks are slippery and mossy. The water’s cold. And you have to actually go to a functioning creek.

I can’t tell you the number of gangly 5-year-olds I’ve seen being carted around in strollers, legs hanging over the side, face craned toward the tablet in their laps, oblivious to the world occurring around them. Or the kids whining about how “their legs hurt.” One study from 2013 found that today’s kids take a minute and a half longer to run a mile than kids of the same age from 30-40 years ago. How do you think their endurance will be as adults?

The reason why is simple. Kids have fewer opportunities and inclinations to walk. As mentioned earlier, kids aren’t roaming around neighborhoods like they used to. They’re not putting in the miles. The rise of smartphones has also contributed. If part of your daily allotment of hours is dedicated to something entirely novel on the historical timeline—staring into a handheld electronic device—you will necessarily have fewer hours available to do physical things like walking.

Kids are more likely now to be weaklings than they were twenty years ago. Between 1998 and 2008, ten-year-olds in one British town suffered huge losses in strength:

Who wants to bet the problem is even worse today?

This is a problem. Child weaklings grow up to be adult weaklings. Their physical inabilities perpetuate themselves. If physical movement isn’t rewarding because you’re bad at it, get winded easily, and fail at the skills required to excel, you’re less likely to pursue it into adulthood. That’s when the health issues mount, your appearance declines, and things fall apart. A society of physically inept and weak people cannot stand for long.

You don’t “need” these skills to live in today’s world. That’s the whole point, in fact: Kids are coming into adulthood never having needed to learn how to do this stuff. But being able to jump, balance, throw, climb, and walk while carrying heavy loads makes life easier, more enjoyable, and more rewarding. It opens doors. The disappearance of these skills is a tragedy.

But it’s fixable. I’m not calling for rigorous training sessions. Humans are built to do these things. They just have to do them.

What can we do to fix the problem? Are there any other skills today’s younger generations just aren’t developing?

I’d love to hear your thoughts. Take care, everyone.