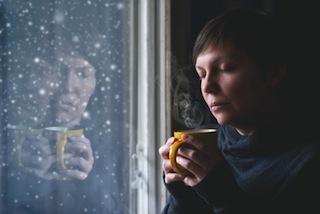 After last week’s look at what winter does in terms of physical symptoms, I’d be lax to not address the obvious elephant in the living room: mental health in the colder, darker season. I’ll admit I don’t know too many people who look forward to this time of year past the holidays. The adventure of winter sports aside (for those who love them) and the chance for a little social hibernation (for those who prefer that), winter can take an exponential toll on people past the New Year. That said, just how much is relative inconvenience versus clinical reality? Do our moods collectively change? Why do some people experience more significant effects? What are the real hormonal influences this time of year, and what (if anything) can or should we do about them?

To present one novel research context, even analysis of Google searches seems to point to some kind of seasonal shift in mental well-being. Researchers studied four years of Internet queries across countries in both the Southern and Northern hemispheres and observed that Internet searches for every major mental illness or condition—everything from schizophrenia to ADHD, anxiety to OCD—consistently rose during the winter months. While some categories like searches for bipolar disorder differed by 16-18%, others like eating disorders were 37-42% higher in winter than in summer. Internet searches for suicide rose 24-29% in winter compared to summer, even though actual suicide rates peak in late spring.

Of course, the most common (or at least commonly known) seasonal responses is Seasonal Affective Disorder, a.k.a. SAD, an ongoing form of depression in which symptoms annually subside during certain seasons (usually but not always summer). As with many forms of depression, people can experience a sense of hopelessess, a glut in energy, and sleep difficulties among other symptoms. Researchers estimate around 6% of the U.S. population (varying extensively from 1-10% based on latitude) experiences SAD and an unknown but much larger number go through a lesser form known as the “winter blues” in which similar symptoms occur but in milder forms.

Experts have long debated the causes of SAD, but the central assumption focused on reduced natural light exposure. That said, it’s not simply an isolated factor but a constellation of influences (including apparent genetic propensities, biological nuances and demographic facets). Women are much more likely than men to experience SAD symptoms with studies suggesting anywhere from a 2:1 to 9:1 ratio. Likewise, the initial cause becomes a more complex picture when researchers look at the cascade of presumed physiological effects.

In PET scans of live brain tissue, for example, researchers have discovered greater levels of serotonin transporters (which bind with and ferry serotonin to the nerve cells, in essence reducing serotonin activity) in the brain during the fall/winter months. Because serotonin is believed to help maintain emotional balance as well as influence energy levels, sleep/wake cycles and even to a certain extent appetite, the potential impact is obviously significant.

That said, just as not everyone would say they truly experience seasonal affective disorder, not everyone’s brain processes the seasonal serotonin change the same. Researchers have observed this shift as more of a “dial” than a switch, with those who experience SAD symptoms demonstrating a 5% increase in their serotonin transporter levels compared to their summer measures, while those without SAD showing no substantial rise.

Yet, it’s not only depression some of us may be dealing with. Animal research suggests that shorter days shift female hormone levels in such a way to promote more aggression. Female hamsters exposed to shorter days displayed more aggressive tendencies and had increased levels of both melatonin and DHEA than those exposed to longer days. Among the hamsters who experienced the longer light exposure, even an injection with ACTH (which spurs the release of DHEA) didn’t show the same responses as the short-day animals.

As the researchers note, it pays from an evolutionary perspective, to be more scrappy and aggressive during bouts when there is inevitably more competition for fewer food resources. If this pattern is applicable for humans, maybe it can partially explain why people go so insane on Black Friday….

Aggression aside, the evolutionary angle would seem to suggest people should conserve more energy in winter, that they would attempt to sleep longer and rest more. That said, we moderns live literally more sheltered lives than our primal ancestors did. Because of our housing and cars and offices, we are outside very little. We have plenty of elements to our modern lifestyle that already put our circadian rhythms at risk. We’re already chronically deficient in vitamin D. We’re stressed by too little sleep, too much stress, too little movement and too little genuine nutrition.

If we know a problem is seasonal in nature, the logical idea is to utilize whatever means we have available to minimize the seasonal deficits. We can spend more time outside during peak sunlight hours, use light boxes—still the most recognized and recommended SAD and winter blues treatment— and go to bed earlier without an evening’s worth of blue light from our T.V.s and gadgets. Likewise, we can supplement vitamin D (here’s the one I take), given our lower overall direct light exposure in the winter months and in certain cases with melatonin for realignment of our bodies’ cues with external timing. Finally, experts also increasingly emphasize that traditional talk therapy can for some people be even more effective than the use of any single traditional physical therapy. And if all else fails, try this one weird trick known as koselig.

As we so often recognize, Primal living takes the long view in resetting as much of ours lifestyles as possible, sometimes with traditional activities and sometimes with strategic stand-ins.

Have you experienced the winter blues or SAD? Share your perspectives on seasonal mood and treatment options. Thanks for reading, and have a great end to your week.