Why What You Walk (or Run) on Matters 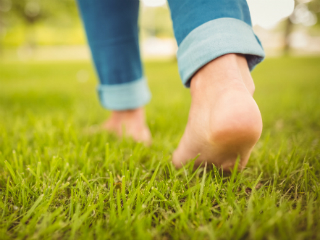 I’ve always preferred traversing natural surfaces. Growing up in New England, I developed my cross country running chops actually running across the country surrounding my house. My favorite endurance events were those involving trees and trails to the point that I might still be doing them if they were exclusively nature-based. Even today, I cherish my hikes through the Malibu hills and rather begrudgingly go for neighborhood walks only because the sidewalk is so convenient. Walking on flat, linear, manmade surfaces is certainly fine, especially if I’ve got my wife or dog or a friend?or I’m exploring a new city?but naturally deposited ground full of dips and peaks and studded with random deformations is ideal.

And there’s growing evidence that it’s better for you, too.

I’ll ignore the grounding/earthing issue for now. I’ve covered grounding before and it’s difficult, maybe impossible, to disentangle the proposed effects of electron transfer from the known effects of walking barefoot through natural settings.

I’ll also ignore the footwear, even though it certainly matters. You guys know that, so I’ll assume that we’re all in minimalist-type shoes or none at all. Thick-soled shoes dampen the experience and benefits of traversing natural terrain. If you’re wearing hiking boots, walking surfaces don’t matter much; your feet are too sedentary to notice a difference.

Let’s just get straight to it: our hunter-gatherer ancestors walked exclusively across natural, uneven surfaces. Sometimes it was hard (hard stone carved by glaciers). Sometimes it was soft (sand, loamy earth). Sometimes it was firm but forgiving (jungle floors, dirt trails). But it was never linear. Often it was along pathways littered with debris and local deformations formed through natural footfalls and animal movements, not by large work crews wielding pneumatic tampers. Those are the qualities characterizing the evolutionary environment of the human foot:

Asymmetry: The world isn’t balanced. The trail isn’t the same every time you step. There’s the rock under your foot, the root jutting out, the anthill, the acorns, the slope.

Non-linearity: They curve and meander, dip and rise. You have to think when you walk on a trail. You have to be aware.

Hardness: Most natural surfaces are softer than artificial surfaces. Not always (like the aforementioned hard stone) but usually.

Elevation changes: You go up and down. You climb, which uses one neuromuscular pattern, and descend, which uses another.

Unpredictability: You could slip on a slick rock, step into a puddle obscured by leaves. Walking on a manmade surface, you (and your brain) know what you’re getting. Walking on natural surfaces, you, your brain, and your feet must constantly adjust to unforeseen perturbations. They are different every single time, so you can’t predict them. You’re always learning, always accumulating a library of foot-surface interactions.

Modern walking environments are nice. They’re easy and convenient. They’re comfortable to walk on. You can go for miles and miles on pavement without getting too sore or tired. But they’re too comfortable, easy, and convenient for our bodies, which need adversity to function best. Think about strength training and hard sprints: those are acute bouts of adversity that make us stronger and faster and healthier. Just like our bodies adapt to sedentary life, we adapt to walking along the same surface. And whether you’re walking in Des Moines, Manhattan, or Los Angeles, it’s the same basic walking surface. Your older, more medieval cities across the rest of the world tend to have more interesting walking surfaces (cobblestones, stone parquet flooring, etc), but the general trend in civilization’s walking surfaces bends toward uniformity and predictability.

Most terrain/walking surface research focuses on running and formal training rather than walking. Walking is quite pedestrian, many scientists assume, and deserves little scrutiny. No matter; the effects of running and training on various surfaces are just more pronounced versions of walking on the same surfaces. Any changes that occur with one will probably manifest in the other, albeit at different rates. Running on concrete will be much harder on your body much faster than walking on concrete. With that in mind, let’s look at some research.

Movement expends energy. More difficult movements expend more energy. Easier movements expend less energy. The softness of the walking surface changes the bioenergetics of movement because you “sink” into it. That’s why walking through sand requires as much as 2.5 times the energy it takes to walk on hard surface at the same speed and snow walking (without snowshoes) triples energy expenditure.

There’s some evidence that these differential effects can have training benefits. In one study, 60-75 year old women followed an eight-week walking program. Half walked on soft sand and half walked on a firm surface. Both groups improved their fitness, but the sand walkers experienced greater gains in hip strength. For a population uniquely afflicted with osteoporosis and hip fractures (about 200,000 occur each year in the US), stronger hip musculature and by extension greater hip bone density could make a huge difference in health and quality of life.

Sprinting on sand forces maximal expression of metabolic output, muscle activation, and energy expenditure while reducing speed and impact shocks. Your body “thinks” it’s sprinting, and you’re working as hard as you can and enjoying (well, not sure “enjoying” is the right word) the metabolic training effects, but you aren’t forcing your body to go faster than it’s capable or subjecting your joints to the jarring impacts of regular flat-ground sprinting. This could be great for older folks whose bodies can’t handle the top speeds and forces of all-out sprinting but still want the benefits.

Tracking gait alterations can predict diabetic neuropathy before traditional symptoms arise in older diabetics, and natural surfaces work better than flat treadmills. Having them walk on actual uneven walking surfaces reveals predictive gait disturbances far earlier than treadmill walking. By the time you’re unsteady on a flat treadmill, it may be too late.

Running on grass attenuates overall body loading and changes the distribution of forces across the foot. When you run on a hard surface (concrete or asphalt in one study), you expose your feet to greater forces. When you run on grass, forces are 9.3% to 16.6% lower in the rearfoot and 4.7% to 12.3% lower in the forefoot. Not even running on a rubber track (which is supposed to be easier on the joints) is any less forgiving than running on grass. Another study found that running on grass places significantly lighter loads on both the forefoot and rearfoot than asphalt.

Fake grass isn’t much better. On fake turf, running places significantly greater loading on the lesser toes (everything but the big toe) and central forefoot and slightly less on the medial forefoot and lateral midfoot.

Overall, both running and walking on grass reduce the maximum plantar pressure exerted across the entire foot. Little research on dirt and earth exist, but these results for grass should carry over to other natural surfaces too.

What’s plainly obvious is that the research is lacking. While we have a pretty good idea of what walking on sand and grass does to our feet, body, and bioenergetics, that’s about it. What about walking on cobblestones? Running on gravel? Sprinting through snow? Only real way is to just get out there and give it a try.

Try walking along a creek on top of rocks. Go barefoot. Extra points if they move and roll and tumble. Extra extra points if you don’t slip.

Lack of research aside, more walking surface variability is better. Low variability exposes your body to repetitive stressors and joint articulations, increasing the risk of overuse injuries. Plus, and this is a big one, walking on flat, even, linear, predictable surfaces is just boring.

What’s your experience walking, running, and training on natural versus artificial surfaces? What do you prefer?