Why Older (and Younger) Runners Need to Strength Train 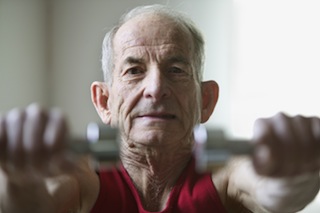 Last month, the NY Times Well Blog dropped a piece discussing the results of a recent study of how endurance runners alter their stride as they age. Investigators observed a group of 110 experienced runners aged 23 to 59 making their way around a track. Runners under 40 tended to display greater lower leg activity as they ran, whereas runners over 40 showed impaired lower leg activity. The latter relied more on their hip musculature (the absolute activity of which was still lower than that of younger runners) and showed an impaired “push off”; they had weaker strides and didn’t rise up as high off the ground. Overall, the older runners used their ankles and calves less without increasing hip musculature activity to cover the difference. They just got slower.

The study has its limitations. This study was a brief snapshot in time, rather than a decades-long study of how the same runners change their stride over the years. But it was quite clear: older runners tend to be weaker than younger runners, especially in the lower legs, and this results in a less powerful stride, an altered running gait, and a slower running speed.

This is just the latest in the growing body of evidence showing the beneficial effects strength training has in endurance athletes, especially older ones. Long ago, when I was running marathons competitively, I was one of the few guys paying any serious attention to strength training. It’s partially why, despite my genetic predisposition to joint injuries, I was able to stay in the game as long as I did. Sure, I had sky high inflammation, digestive issues, and some nasty tendinitis, but structurally, I got out relatively unscathed. I look around at some of my peers who are hobbling around and I realize I got off easy.

Strength enables optimal positioning. When you run long distances, you get tired. That’s unavoidable. Fatigue is a fact of running life and dealing with it is the name of the game. If you’re deadlifting once a week, your trunk musculature will be able to support the proper upright spine during long runs. If you’re not strength training and your lower back is a weak point (as it is for many runners), your body will reduce power output to protect you from injury. By strength training, you’ll increase your resistance to form degradation and increase power output.

Strength actually increases endurance. Lifting heavy things makes the muscles doing the lifting more efficient at what they do. That includes running long distances. And as the NY Times article showed, a distinct lack of lower leg strength may be causing the performance deteriorations associated with increased age.

Strength improves your finishing kick. It’s a pivotal moment of any race: the finishing kick. You’re coming up toward the last leg of the race. You’re exhausted. You want to quit. But what about that poser just ahead of you who’s been leading the entire race? He’s right there. He’s within reach. You can totally beat him if you just summon a burst of strength for the final few hundred meters and go all out. The guy who strength trains every week is going to have the explosive power necessary to make the final kick happen, even when fatigued at the end of a long endurance effort.

Strength reduces unnecessary stress. My friend Dr. Kelly Starrett, master physiotherapist and author of Becoming a Supple Leopard, notes that the optimal positioning provided by strength training can actually make running less stressful. Superior strength allows runners to keep an upright posture throughout the stride pattern, even as you fatigue in the latter stages of a workout. Rather than droop the head forward, roll the shoulders, tuck the pelvis, and constrict the breathing apparatus when fatigue sets in, strength training allows runners to maintain the “power pose.” This minimizes the fight or flight stimulation from the workout and speeds recovery by reducing unnecessary added stress that has nothing to do with the actual training effect.

Second, strength training increases the injury resistance of joints and connective tissue. Running puts a huge amount of stress on the knees, ankles, and hips. Lifting heavy helps prepare your joints for some of that stress, and it may even help you recover from existing damage; just last week, a paper was published showing that high-weight, low-volume strength training may heal degenerated discs in the back.

Third, strength training improves bone density. Long distance runners consistently have lower bone density scores than age-matched athletes from other disciplines like sprinting, middle distance running, and power athletics. One reason is that endurance training tends to burn the most calories and cause the most stress to accumulate, leaving little energy left over to devote to bone maintenance, let alone growth. Another reason is that except for the legs, endurance running is low impact. Our bones require the application of direct mechanical stress to stimulate bone density growth. Throwing in a couple sessions of heavy (relative to your capacity) strength training each week can really make up the difference and stimulate bone density improvements. Since older folks are already the population at the greatest risk for low bone density, older folks who are also endurance runners absolutely must lift heavy things.

In the NY Times article, they reference a 2012 list of standard lower leg stretches and exercises older runners should employ to make up the strength deficit, the kind of thing you’d get on a fading printout from the orthopedist’s office. Give it a look. These are actually great choices, but they’re probably not sufficient. For instance, the heel cord stretch they recommend is inadequate. You’ve seen this one. Face a wall and do that thing with your legs where it looks like you’re trying to keep the wall from falling over. It’s the classic calf stretch, but in my experience, it doesn’t do much.

Lately, my favorite calf/Achilles’ tendon stretch has come from Angelo dela Cruz. If I squat, feel a bit stiff, do a few rounds of Angelo’s stretch, and squat again, my range of motion noticeably increases. Really raise those toes off the ground to stretch the calves. This also hits the hamstrings a bit.

The rest of the exercises are actually really solid. You might add some weight to the calf raises or, if you have a partner and a willingness to look ridiculous, try donkey calf raises. Still, simply focusing on the lower legs isn’t enough to truly obtain the benefits listed above.

Going barefoot (or minimalist) will help. Anyone who’s ever gone for a long hike or run in their bare feet or wearing minimalist shoes can attest: it blasts your calves and strengthens your feet. Doing that every once in awhile is a recipe for perpetually sore calves. Doing it habitually and gradually until your lower legs are inured to the stress makes for rock-solid, powerful calves, feet, and ankles. Be sure to run through my barefoot transition exercise recommendations, which are also good for general lower leg health and function, and be extremely cautious if you’ve spent your entire life inside shoes.

To really get the benefits, you’ll want to do some basic full-body strength training. Now, strength training is scary for many people who’ve been told to “take it easy” and warned about catastrophic injuries. Seniors can strength train. Heck, they can do power training. They can move quickly and lift heavy. Why? These are relative terms. A 64 year-old master’s marathoner doesn’t need to do jump squats with his own bodyweight laid across his back. A 55-year-old 10k enthusiast doesn’t have to power clean 0.75x her bodyweight to get an effect. What’s important is that they lift weights that are heavy—for them. One systematic review of the evidence even found that power training is slightly better than standard strength training at producing benefits to functional fitness in elderly people.

Bodyweight movements may be plenty. For most runners who aren’t doing anything strength-related, bodyweight training is perfectly adequate. Establishing proficiency first in the Primal Essential Movements—squats, pushups, pullups, planks—will give an inexperienced runner a huge boost to performance and injury resistance. Bodyweight training also gives a good foundation for further exploration of strength training methods.

Barbells are great, but machines are not the enemy. While I’ll always celebrate the aging runner who wants to squat and deadlift, the leg press and hack squat machines are both excellent choices for building real strength without requiring the mobility of the barbell movements.

Single-leg and single-arm training (unilateral exercises) build strength and offer a unique stimulus without requiring the loads inherent to bilateral movements. Instead of squatting with a 200 pound barbell, you can do reverse lunges or rear foot elevated split squats with a 50 pound dumbbell in each hand.

Whichever you choose, go high-weight, low-rep, low-volume. Keep sets short. Take breaks. It’s better to do 5 sets of 3 reps with slightly more weight than 3 sets of 5 reps with slightly less. You’re not trying to get huge (well, maybe you are). You’re not trying to destroy yourself and ruin the next day’s run. You’re looking to enhance your endurance work with smart, targeted strength work.

In my upcoming book Primal Endurance, I’ll lay out the optimal way for endurance athletes to strength train for performance, injury resistance, and longevity. For now, though, just go lift!

Any endurance athletes out there? How do you use strength training to improve your performance?