Why Camping Is So Great: The Benefits of Spending Time in the Great Outdoors 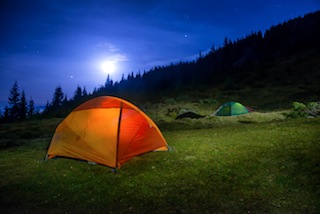 I’ve always loved to camp. From my early days as a kid growing up in Maine (where it seemed like everyone camped), to my death-defying adventures with Outward Bound in the wilds of New England as a teen, to my current setup running a business in the Malibu hills, I’ve been a camper. Even when I’d dedicated my life to endurance training and had little time for anything else, I always made it a point to get away to the woods with the family for a few nights whenever I could. The reasoning was basic: it was relaxing, enjoyable, decompressing, and just plain fun. And that’s why most people camp. It just feels right, doesn’t it?

But as is always the case, there’s more to it. Things that feel right (or taste right) often have distinctly positive physiological effects. So, why is camping so great? Why, even today, do campsites at Lake Tahoe or Yosemite disappear upon release faster than Taylor Swift concert seats? If you’re a skeptic of camping, be sure to read on. I’m sure I’ll win over some of you by the end.

It’s a rapid departure from your regular life without costing a fortune.

It’d be great if everyone could travel the world every time they had a little PTO saved up. But for most folks, going abroad, or even to another city in their home country, is cost-prohibitive. There’s the plane ticket. There’s the passport. There’s the lodging, the meals, the attractions, the ever-presence of locals whose entire livelihood depends on getting you to spend money. If you can swing it (and with smart planning, most people actually can), world travel is awesome and helpful and invigorating. But it can be just as world-changing to drive a few hours out of the city to a place where you can lay your tent down, start a campfire, and gaze up at the universe. And a whole lot less expensive.

Remember that big post I wrote on the many benefits of spending time in or near green spaces (forests, parks, nature in general)? Yeah. Go review that and then realize that camping is living in those green spaces. As such, the benefits will be magnified.

It can improve your sex life.

Sex is extremely Primal (more so than grass-fed beef, even), and if we’re in a position to have it with a willing partner for whom we care, we should get as much as we both want. It’s a healthy, enjoyable habit. Unfortunately, we’ve managed to muck it up with cultural constructs of shame and inhibition and confusion that leave most people frustrated and dissatisfied with their sex lives. Sex is sacred, but many of us don’t get enough. One potential way to improve is to go camping with your partner. In one study, 500 couples from the UK rated their sex life before and after a three night camping trip. Before the trip, 47% were having sex once a month, 28% once a week, 23% once a year, and 2% every day. During the trip, most of the couples improved their sex lives, with over half reporting having sex “a lot more often” and 37% doubling their sex intake. As to the causes, 45% reported fewer distractions, 37% reported fewer worries, 9% said it was the increased physical proximity, 7% the earlier bedtime, and for 2% of the couples, just “being in the outdoors” was enough to increase friskiness.

We cycle through apps and sites on an endless loop, from Twitter to Facebook to Reddit to email to HuffPo to nutrition message boards to MDA and back to Twitter, switching to a new one after consuming the last one’s content until we arrive back where we started, teeming with fresh updates. It doesn’t end. The stream of information is always there, buzzing at your hip, promising respite from the boredom of your mind. Camping is a nice way to force that interruption because, well, Verizon/T-mobile/etc haven’t yet found it productive to beam their signals that far into the wilderness. If you insist on bringing the phone along (because let’s face it, you will), take a Bluetooth speaker too and use it to play music. Don’t fritter away time staring at the screen hoping for a 4G signal that never arrives. Don’t be the guy climbing trees just to get a bar (be the guy who climbs trees just to climb trees). Load up some tunes beforehand and maybe take a few pictures — nothing else. You can also track your step count on all those hikes you’ll be taking, since most phones these days can do that on airplane mode.

When you remove the possibility of connectivity, you realize that being with yourself in the moment isn’t so scary.

It can be particularly restorative for cancer survivors.

A recent review of the evidence found that exposure to nature has many benefits for cancer survivors. It can enhance the quality of life for breast cancer survivors, increase the ability of survivors to concentrate their attention (attentional fatigue is common in this group), provide a source of self-esteem and belonging for children and adolescent cancer survivors, and reduce state-anxiety (with the “state” being “recent survivor of cancer”). Although the review wasn’t centered specifically on camping, camping is the most user-friendly way to immerse oneself in nature for an extended period of time and the results should apply here.

It’s a short-cut to mindfulness.

If you’re anything like me, formal meditation doesn’t work. I can sometimes do guided meditations, but even then sitting still gets tough. And quite often I’ll just fall asleep, which is fine but not the point. Many people find that “forced” meditation works far better than free meditation, where instead of sitting and paying attention to breath or a mantra or whatever, you do something that necessitates mindfulness. To me and millions of others, camping is one such thing. When you camp, you have to be there. I already mentioned the lack of connectivity to social media and the phone. That’s a big reason it helps center the awareness. But there’s also the stillness of the outdoors. You’re not contending with car horns or alarms and that couple fighting next door and cat fights at night and the din of traffic and general urbanity. You’re hearing the buzz of insects, the song of a bird, the crackle of the fire. These are qualitatively different sounds. Rather than interrupt, they raise awareness. They don’t intrude, they enrapture. They bring attention to the present moment. And when night falls and you all sit around that circle, the campfire becomes your entire world.

It enforces a healthy bed time.

How many of you stay up late despite reading all the studies and all the posts that stress the utter importance of a good night’s sleep? Heck, I write the things and I still stay up too late sometimes. Camping takes care of that for you by resetting your circadian rhythm.

Leaving concrete and cell phone towers and suburbs and traffic-choked roads and jobs behind to hang out in the woods for a few days isn’t just eliminating a source of stress; it’s returning to our ancestral ecosystem. And once you get over the bugs and the dust, and you get your tent set up and figure out a way to live with the mosquitoes, it really does feel like home.

How to do it right:

That’s about it. The rest of it boils down to gathering some friends, making the reservation (or finding a place that’s first come, first served), and just doing it. So go do it.