What’s Living on Your Skin? 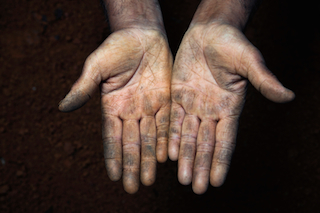 The average human body has about 1.2 square meters of skin. Scattered across and nestled in its myriad crevasses and canyons would lie trillions of bacteria, fungi, viruses, and mites. Before you shudder and reach for the bleach and a stiff scouring brush, remember the importance of cultivating and supporting the billions of bacteria living in your gut. Recall the vital roles they play (that we know about) in our health and realize that the skin microbiome isn’t any different. Although research is young, we are learning that the critters living on our skin, who number in the billions per centimeter of skin, are supposed to be there. And even though we don’t know exactly all they’re doing, we know this:

The skin microbiome isn’t an artifact of civilization or agriculture. We’ve always hosted colonies of microbes on our bodies and we’ve evolved in the context of a skin microbiome. Since our current environment is more sterile than any preceding it, our ancestral skin microbiome was almost certainly more diverse. We must exercise caution, then, when trying to extirpate our skin of “germs.”

The composition of our skin microbiome varies between areas of the body. Your left hand, for example, has a markedly different microbial community than your right hand.

Like the gut bacteria, our skin bacteria perform important roles. It’s possible, maybe even probable, that the fungi, viruses, and mites living on our skin are also necessary, but we simply don’t know enough about those critters to say for sure so today we’ll focus mainly on how the bacteria living on our skin impact us:

They regulate the skin-level immune response to allergens. For instance, in adolescents, the presence of Acinetobacter bacteria on the skin was associated with the expression of anti-inflammatory molecules and protection against allergic reactions. In a mouse model portion of the study, those same microbes directly inhibited allergic sensitization.

They protect against incursions by pathogens. Staphylococcus epidermis, a common resident on our skin, produces antibacterial peptides that prevent the formation of pathogenic staphylococcus aureus (the microbe responsible for the infamous staph infection) biofilms. One experiment found that human subjects with S. epidermis in their nasal cavities were totally free of S. aureus infections.

It’s not just atopic dermatitis. There are also differences between the skin microbiota in healthy patients and patients with eczema, and reduced microbial diversity is commonly found in patients with psoriasis.

The same bacteria can be helpful or harmful depending on the context (PDF). For instance:

Some skin bacteria attract mosquitoes. Others repel them. Generally, malaria mosquitoes are attracted to people with low microbial diversity on their skin. Human skin with greater microbial diversity seems to be protective. More specifically, odors produced by the common bacterial species Pseudomonas aeruginosa are less attractive to malaria mosquitoes than odors from four other common skin microbes. This suggests a role for the skin biome in determining a person’s vulnerability to malaria, and perhaps other insect or tick-borne diseases.

It might appear as if the skin biome isn’t as “important” as the gut biome. Acne, eczema, and allergic reactions that make you itch and break out are annoying, but we don’t usually consider them life-threatening. I would caution against that position. For one thing, those conditions can really affect a person’s enjoyment of life. They show on the surface but their effects run deeper. Secondly, we have a lot to learn. We still haven’t identified most of the bacterial species living on our skin. And even the term “species” isn’t exactly accurate for bacteria, since horizontal gene transfer between disparate bacteria and other complexities have researchers questioning whether we even know how to classify bacterial species (or if they exist at all!).

But if there’s a general rule that appears to be true, it’s that greater diversity in the skin biome is preferable to less diversity.

What do we do about it, then? In a future post, I’ll explore the available evidence to figure out how to optimize the health and diversity of our skin biome.