What is the Best Time of Day to Exercise? 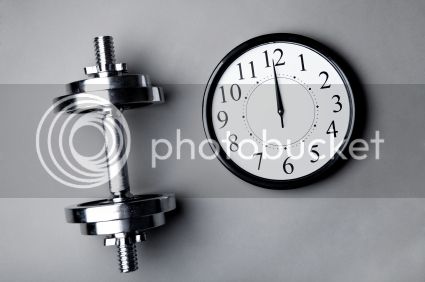 Many people, myself included, prefer streamlining fitness to obsessing over its minutiae. Although I’m no fan of their footwear, Nike’s “Just Do It” really does capture my view of what exercise should be. Find what you like doing and what works for you, and simply go do it. But not everyone is that way. Tons of people truly enjoy the nitty gritty details. They like the research, the nutrient timing, the supplementation. They’re the ones discussing the respective differences between sumo deadlifts, regular deadlifts, and Romanian deadlifts. They’re the ones who want to wring out every last drop of performance.

I get that. I used to be like that, too, but now I take more of an academic interest. That’s not to say I don’t pay attention to what I’m doing, because while I like to think I’m just going with the flow and doing what I enjoy, I also like knowing that what I’m doing is effective. Basically, I don’t like wasting time. Plus, many readers fall into the latter category of those who want the details.

Today, I’m going to look at the effect (if there is one) of workout timing. Should you lift in the morning upon waking, or at night? Are the effects of morning exercise different than the effects of afternoon exercise? Does working out right before bed disrupt sleep or improve it? Let’s explore these and other questions as we decide which is the best time of day to work out – if such a thing definitively exists at all.

I’ll go down the line and examine the effect of diurnal variation on various aspects of exercise. Let’s dig in.

If you’re interested in performance, some evidence seems to point toward the afternoon and early evening as the best time to exercise. In one recent study, ten and eleven year old boys performed better in the afternoon than in the morning. Grip strength improved 5.9%, squat jump performance increased 3.5%, the “5 jump” test improved 5%, and performance increased 5.5% (peak) and 6% (mean) during the Wingate test (which measures peak anaerobic output) from morning to afternoon. They also tested the boys in mid afternoon (2:00 PM) and early evening (6:00 PM), but found no difference in performance. This study found a similar result in morning and afternoon PE students using the Wingate test, but the authors suggest that longer warmups during morning sessions could mitigate the performance deficit. So, morning workouts require longer warmups? I can buy that.

Sprinting? Try afternoons for maximal power, but don’t think you’ll have any extra stamina. This study found that maximal power was highest during the first three sprints (of ten total) in the afternoon when compared to morning sprints. Fatiguability was no greater, though.

Another cycling study found that afternoon power output was greater than morning power output in trained cyclists. Fatigue was not affected by time of day, however.

I wouldn’t assume that all exercise is better in the afternoon, however. The authors of this study suggest that submaximal exercise – like jogging, walking, hiking, or anything that relies on stamina and little else, really – is not negatively impacted by diurnal variation, which makes sense in light of the previous studies showing that while maximal power decreases in the morning, stamina does not.

Takeaway: Raw power and performance in weight lifting, cycling, and sprinting is highest in the afternoon and evening. Stamina does not increase or decrease, however, and the changes in performance may be mitigated by more extensive warmups. If you’re a high level athlete or really interested in how you perform, afternoons and evenings are best. If you’re just trying to get and/or stay fit, strong, and healthy, morning workouts are just fine.

How does timing change how a workout affects your hormonal profile?

One study found that lifting heavy things in the evening, as opposed to the morning, resulted in a more anabolic (strength and size-building) testosterone/cortisol ratio. Baseline cortisol values were lower in the evening (which is normal) and higher in the morning (also normal; cortisol is necessary for morning wakefulness), which probably explains why evening training worked better. If you’re starting with already elevated cortisol, some intense training is only going to spike it even more. If you’re starting with moderate cortisol, intense training won’t have as negative an effect and your testosterone levels will likely be sufficient to counteract the rising cortisol.

Not all research is so clear-cut, though. In a study on muscular hypertrophy (growth), both morning and afternoon weight-training worked equally well at growing muscles and increasing maximal strength. There was a slight, but statistically insignificant advantage to training at night.

Takeaway: Don’t hop directly under the bar in your pajamas with bleary eyes. Take the time to wake up and relax before working out. That might mean pushing your morning CrossFit class to an afternoon session, or at least a late morning one. We know that cortisol is normally elevated in the mornings, and exercise increases cortisol, so be aware of how the two interact.

How does diurnal variation affect the general health benefits of exercise? Obviously, if you can perform better and reap bigger strength gains in the afternoon, you’ll probably gain more lean mass and lose more fat, but what does the research show?

Recently, much has been made of the neuroprotective effects of exercise. In other words, the pursuit of brawn appears to lead to brain, too. A recent study found that the neuroprotective effects of aerobic exercise were modulated by its timing. Rats ran for 20 minutes on a rat wheel, either early in the morning or in the afternoon, after which their HAT/HDAC ratios were measured. HAT are histone acetyltransferases, and HDAC are histone deacetylases. The HAT/HDAC ratio indicates how much acetylation is occuring. Higher ratios indicate more histone acetylation and greater neuroprotection, while lower ratios indicate less neuroprotection. So, high is good, low is bad. Both exercise protocols increased the ratio, but the afternoon session increased it more than the early morning session.

But the time of day doesn’t always matter. Check out this study, in which morning and afternoon treadmill sessions were tested for their respective effects on blood fluidity post exercise: blood fluidity improved across the board, regardless of when the exercise was performed. Another study found that resistance training (3 sets of 7 reps at 80% of one rep max) improved platelet function, irrespective of time of day. Morning and afternoon sessions were equally beneficial.

Takeaway: Evening/afternoon sessions seem to be somewhat more protective and beneficial, but morning sessions are also helpful – just less so. And there are other parameters on which diurnal variation has no effect, so it’s not a clear cut answer either way. Let’s put it this way – both are good.

Everyone can agree that exercise in general improves the quality and incidence of sleep. Simply put, if you’re on a regular exercise regimen, you’ll probably sleep better, deeper, and easier. But what about working out right before bed? Will the cortisol spike and keep you awake? Will the increased heart rate keep you from settling down? Let’s find out and look at some studies.

Here’s one that found a 5:00 pm 30-minute session of moderate exercise improved sleep in elderly patients who normally had trouble falling asleep. They fell asleep faster and enjoyed greater satisfaction with the quality of their sleep. Another, using underwater exercise in untrained subjects, found that late afternoon (4:30 pm) exercise had no effect on sleep. Even late night, “vigorous exercise” may not negatively impact your sleep, as a study in trained cyclists showed. The subjects were able to get to sleep 30 minutes after three hours of cycling at 65-75% of their max heart rate without issue.

Takeaway: Unless you personally find that late night exercise negatively impacts your sleep, don’t worry about exercising at night.

We’re all individuals here, but there may be patterns of workout consistency that correlate with the timing of workouts. Do morning exercisers work out more consistently than afternoon or evening exercisers?

One study found that people who exercised in the mornings were more likely to exercise in general, while people who said they exercised at night or in the afternoon were less active overall. I wouldn’t read too much into this, and I think a likely explanation is that people who are willing to wake up early to work out are more likely to stick with something – like a workout regimen. Early risers are generally more consistent, I think most people would agree, and this research bears that out.

Takeaway: Epidemiology is nothing to hang your hat on. Correlations may indicate something about populations, but if you, yourself, find you exercise better at a particular time of day, they are almost useless.

As for me, I like late morning workouts, but that’s just because late morning works best for me and my schedule. I’m not trying to optimize my hormonal responses, boost my metabolism, or maximize my workout grip strength. I’m just working regular exercise into my daily routine, when and where it fits.

You can read the research and follow the links, but ultimately, the best time of day to exercise is the time of day that works for you. If you’re dead tired after work, perhaps a morning session is the answer. If late night workouts keep you buzzed and awake, move them back an hour and go from there. Also, as the context of your life changes, you’ll have to mix up your workout schedule on the fly. Get a bad night’s sleep? Your cortisol is raging, and a late afternoon workout is probably better than an early morning one.

When do you workout? Does it work for you? Thanks for reading, and be sure to let us all know about your workout schedule!