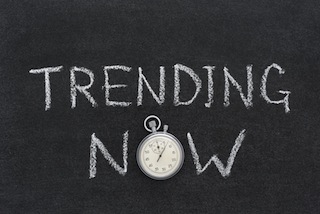 Things are changing. You can throw a stone in any direction and hit either a CrossFit gym, a Whole Foods, or (on Sundays) a farmer’s market. People have actually heard of paleo and most places have a decent salad on the menu. Going Primal isn’t so strange or alienating anymore. Now that the status quo is catching up to us, it’s time to look to the horizon. What are the emerging trends in Primal/paleo thinking that will break out and propel us forward? Where are we taking this train next? And is the world changing in ways conducive to our Primal lifestyle?

The embracing of forbidden foods.

Google Trends are strong indications of the current zeitgeist. Twitter mentions, page views, and book sales are, too. But when an investment firm is betting the farm on something, it’s worth paying attention. Switzerland’s Credit Suisse just published a report entitled “Fat: The New Health Paradigm.” Using hundreds of doctors, researchers, and advisers, the firm analyzed the scientific literature and made a few conclusions:

As to why this excites me, it’s not just because it lines up with my reading of the literature; it’s because it highlights the untrustworthiness of the majority of nutrition experts in government and academia. Those guys have a vested interest in maintaining the status quo because they’re the ones who created it. They have egos to suckle, tenure to protect, industry ties to maintain, previously-established positions to buttress against incoming evidence. Meanwhile, an investment firm isn’t out to save lives or improve humanity, nor are they toeing the party line. They want to make money, and if they’ve determined that red meat, eggs, butter, and other full-fat, Primal foods are the future, that’s a powerful endorsement and spells continued growth.

Not long ago, the idea of seriously eating insects never crossed a person’s mind. Oh, sure, they might try the chapulines at a Oaxacan restaurant or marvel at the bug markets of Bangkok, but for the most part bugs were edible props on gross-out game shows and symbols of exotic excess in movies. Who doesn’t remember (cringing at) the dinner scene in Temple of Doom?

Oh, how things are changing.

The environmental and nutritional advantages of insect consumption cannot be denied. According to a 2013 FAO report, the use of edible bugs has the potential to balance the worldwide food (and animal feed) supply and provide animal (or arthropod) protein at a lower price-point and ecological footprint to those who desperately need it. I expect to see that potential realized.

From the Paleo hot bar at Whole Foods, the grass-fed burger at Carl’s Jr., the anti-GMO pledge of Chipotle and subsequent (and most important) switch to rice bran oil from soybean oil, to the widespread excision of synthetic ingredients and human antibiotics from a number of leading food producers, Primal or Primal-friendly food is increasingly available in everyday life.  Those are specific examples, some would suggest isolated ones. But it seems like every other place advertises “grass-fed” this or “local” that or has slipped a paleo or low-carb addendum to their menu. Search your feelings—you know it to be true.

Former titans like McDonald’s and Dunkin’ Donuts are closing locations and trying “all-day” breakfast gimmicks to hold onto a fragmenting customer base. Soda sales are way down, with companies only staying afloat because they also happen to sell bottled water.

The loss of jobs that ultimately results from the closure of major sources of employment is unfortunate. But overall? It’s a good sign that people are rejecting the kind of food that got us in the predicament we’re collectively in. And let’s be real: if McDonald’s wants to stay relevant in a world that rejects what they offer, they’ll change their offerings. They’ll switch to grass-fed beef in the burgers and go back to beef tallow in the fryers.

They’d better, anyway. Because the consumer rejection of unhealthy food is only going to increase.

Used to be that “gut health” was all about digestion (and only digestion), probiotics were only about countering antibiotic-related diarrhea, and prebiotics were—wait, what the heck were those?

Now we know the members of our gut biomes do way more than help us digest our food. They produce sex hormones and neurotransmitters. They synthesize short chain fatty acids that fuel our colonic cells and stave off cancer. They turn anti-nutrients into nutrients and convert vitamins with low bioavailability into vitamins with high bioavailability. They appear to affect our mood, our emotions, and maybe even our behavior. Heck, the microbiome isn’t just living in the gut; it’s on the skin, in the mouth, in our armpits, and even in the bacterial auras that surround us. Much of this research is young and limited to animal studies, but the implications are clear and we’re already seeing great health benefits with probiotic usage. You’ve also got soapless hygiene products that keep you clean (and give be by spraying bacteria all over your body.

But there’s a whole lot we know we don’t know, and it’s only a matter of time until we suss it out. Within a decade or so, I fully expect therapeutic modulation of the microbiome to be available for conditions like depression, schizophrenia, anxiety, autism, food allergies, and autoimmune disease. Just you wait.

Sitting is bad for us. We know that now. And many companies have responded to the unequivocal evidence against prolonged sitting by offering standing or even walking/cycling workstations to their employees. When they do and the employees indulge, productivity goes up and physical inactivity drops.

Now, another neglected, arguably more important population is getting the same treatment: our kids. Yeah, kids. Those organisms who famously can’t sit still for longer than twenty minutes yet we expect to remain seated for six hours a day. A Marin County elementary school has just outfitted its classrooms with standing desks, and the initial response from teachers, parents, and kids is overwhelmingly positive. And just last month, an Alexandria, Virginia middle school did the same.

This is just the start and I have to assume it will spread across the country, especially with the likes of Kelly Starrett’s StandupKids leading the charge. Although there are fits and starts with the adoption of any large change, folks generally go with what works. If standing desks help kids learn, improves their metabolic health, expends their excess energy, and prevents the acquisition of terrible headaches in both parents and teachers who have to deal with them, who’s going to protest?

The rise of low-carb endurance training.

For years, we’ve been told that to excel, compete, or even finish races in endurance athletics, we need to carb-load. Cue the buckets of pasta, flagons of oatmeal, ziploc baggies full of glucose goo, and gallons of ice cream. That’s how I fueled my years in endurance athletics and, truth be told, it’s how most athletes still do it. Here’s the surprise: you can be an effective endurance athlete while being fat-adapted.

A landmark study came out showing how endurance athletes on very low carb ketogenic diets can burn upwards of 1.8 grams of fat per minute as they run, smashing previously-assumed limits of 1 gram per minute. Incredibly, these dudes weren’t going all out, hitting the wall, or even approaching it. Where their ability-matched counterparts on a standard diet were burning about half glycogen, half fat, the fat-adapted athletes coasted for hours while burning 90% fat. That means they can burn their own body fat for fuel for longer at greater intensities, sparing the rare and precious glycogen for use at the end of the race when all the sugar-burners are bonking.

More and more athletes are discovering the power of fat adaptation. They’re going longer and faster while running on their own body fat. They aren’t bonking like they used to.

Next year, I’ll be doing my part to push this movement even further with the release of Primal Endurance. I can’t wait for you guys to read it.

What other big paleo or Primal trends do you see on the horizon? Let me know down below!