This One Simple Trick Will Make All Your Meals Taste Better 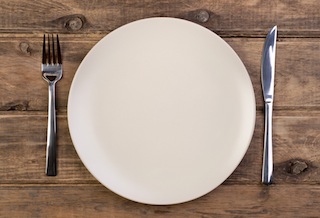 I have several close friends in the restaurant industry, and whether they’re helming hip eateries or Michelin-rated restos requiring reservations booked months in advance, these chefs and owners are all very good at what they do: giving people food that tastes really, really good and gets them coming back for more on a regular basis. Yes, they pick the choicest ingredients and use the freshest produce. Yes, they employ cutting edge kitchen skills and cooking techniques. But a lot of restaurants do all those things and never get over the hump to become truly great. So, how do they do it?

They have one simple trick. It’s universally accepted among people in the know that hewing to this trick is the key to making it or breaking it in the restaurant industry. That’s how crucial this weird trick actually is. Today, I’m going to introduce it you and explain how you can use it to excel in the Challenge.

Okay, here it is.

They offer free temple massages to all diners before serving food, with a (hidden) catch: the “massage oil” used contains a potent dose of ghrelin specially formulated for rapid dermal absorption. Ghrelin is the “hunger hormone.” After temple application, the ghrelin quickly reaches the ventral tegmental area, a region of the brain involved in the food reward response and partially responsible for insatiable hunger. The diners become seized with a hunger so ravenous and physiologically undeniable that even plain potatoes, unsalted chicken breast, and overcooked spinach would top their personal list of favorite meals. They devour the menu, becoming extremely responsive to the descriptions of the various dishes and, unable to decide on just one, order several plates at once. When the food arrives — maybe a lamb tagine with chestnut pureé, a Cuban ropa vieja, even a really solid burger and fries, or all three — it’s the greatest thing they’ve ever tasted. And yes, as I said before, the food is objectively good, but the real trick is that it’s seasoned with the best spice of all:

In the coming months, I’ll be unveiling my own transdermal ghrelin. Perfect for lifters who want to increase appetite for their winter bulk, hardgainers who can’t seem to gain an ounce, recovering calorie restricters who need to learn how to eat real meals again, or anyone who just wants to enjoy their food. Already, beta-testers are throwing “ghrelin parties” where people rub a dime-sized amount into their temples and enjoy incredible meals of the blandest, blah-est foods around. Stay tuned for that.

But as always, my product isn’t the only way to season your food with hunger. There’s another, arguably simpler (and definitely cheaper) method.

Just skip a meal. Breakfast, lunch, dinner — it doesn’t really matter what you skip (although most people do best skipping either breakfast or dinner) — as long as you skip something. And there’s even a name for it: intermittent fasting, or IF.

For the better part of a decade I’ve been playing with intermittent fasting on a personal level and by helping others integrate it into their lives through multiple posts on the blog. The effects on the quality of my meals has been staggering.

Skipping meals has effectively transformed me into a better cook. Honestly? I could probably be the head chef for a very successful restaurant, provided we only accepted guests coming off a lengthy fasting session.

But as Primal enthusiasts, we expect more out of our diet than just a positive relationship with the flavor receptors on our tongues. The way we eat should also improve our health, performance, longevity, productivity, and enjoyment of life (besides just the sheer hedonistic pleasure of eating tasty food).

So what’s the big deal? What else do we get out of skipping a meal now and then beside an increased appreciation for the meals we do eat? Why do I think it’s such a powerful tool for your 21-Day Challenge — and beyond?

The first few times you try it, you might be really hungry, especially if you’re coming off a carb-dependent lifestyle, where your choice of fuel is fleeting and hard to store. But once you’re fat-adapted and you have tens of thousands of available calories at all times, fasting is second nature. It gets easier. You stumble into it by virtue of not being hungry from all the body fat you’re eating.

And when that happens, you’re free. Rather than scurry around frantically when hunger pangs set in, when the lunchtime clock tolls, you just chill and continue on about your business. Rather than worry about postural hypotension and hypoglycemia between meals, you eat when you feel like it. You have more time to do important, interesting things when you’re not thinking about food.

As I tried to make abundantly clear last week, attempting to consciously regulate the number of calories we eat doesn’t work well. If you have an omniscient researcher as authority figure forcing you to eat this or that number of calories, it works, but in the real world, it tends to fail. Calorie counters are plagued by the constant drive to eat. Eventually, they give in because you can’t deny the body forever and hope to win. The real trick is to figure out a way to inadvertently reduce calorie intake without adding another layer of stress to your life.

You can say “only eat 1500 calories, no more!” but you have no way of intrinsically knowing if you’ve gone over or under your limit (there’s no physiological input for “calories”). You’re always weighing and measuring, and even that isn’t very accurate. But when you simply decide not to eat for the next eight hours, that’s a hard and fast boundary that’s easy to respect. No measuring (except the clock) and no weighing. You just don’t eat.

And even when you follow a protocol like ADF (alternate day fasting) in which you alternate a 75% calorie reduction with a 25% calorie surplus day to day, you still reduce overall calories without feeling like you have. Just because you severely dropped or eliminated your normal calorie intake during the fasting period doesn’t mean you make up for it when you eat. That’s one of the most powerful aspects of IF, and it’s why anyone trying to lose body fat or figure out a way to safely drop calorie intake for the 21-Day Challenge should consider intermittent fasting, if only on a trial basis.

Most of us don’t have to feel hunger if we don’t want to. It’s easy enough to grab a bag of chips, boil a couple eggs, or drive five minutes and hit five restaurants and a massive store filled to the brim with every kind of food you can imagine. Food is everywhere, and we’ve forgotten — or never really even known — what it means to be hungry.

I’m not talking about serious starvation or malnutrition. I’m talking about the hour-to-hour feeling you get when you haven’t eaten for five or six hours. It doesn’t sound like much, right? But how many people truly go without snacking between meals?

I’m not sure I’d call it a good feeling, but it’s an important one. Hunger teaches us to identify when we truly need to eat because we need nutrients and when we’re eating just because we’re bored or there’s something tasty within reach. Hunger is essential to being human. It’s motivated us, as a species and on an individual level, to do great things and conquer an entire planet.

There’s compelling evidence that intermittent fasting, and the hunger it brings, can increase mental acuity. In one 2013 study, subjects were randomized to either a low-calorie diet or an IF regimen for two months. After a 6-month followup, the fasting group had better memory and showed evidence of neurogenesis. Similar studies done in mice show even more dramatic positive effects on brain function and brain structure.

Fasting increases neuronal autophagy, a fancy term for a sort of “pruning” of damaged tissue our brains do to maintain health and optimal function. Autophagy, or “self-eating,” is the process by which cells recycle waste material, downregulate wasteful processes, and repair themselves. It’s necessary for proper cognitive function.

Studies aside, I’ve found that fasting energizes me, boosting creativity and giving me a powerful angle from which to tackle a problem, a post, or a paragraph. Then, after I’ve eaten, I’ll often return to the work and come at it from an entirely different (fed) angle.

A word of caution:

In general, females don’t take to intermittent fasting as well or quickly as males. That’s not to say that they can’t do it and benefit from it. They can. But whereas a man might thrive with a seven hour eating window, a woman might do better with a ten or eleven hour eating window. Again, these are general trends to keep in mind, not absolute rules that apply to everyone. Whoever you are (male or female), fasting shouldn’t bring you to the brink of collapse. It shouldn’t be miserable, or torture. If it is, stop, eat something, and try again at a later date. Fasting can be a powerful tool but it’s not for everyone, and that’s okay.

I know, I know. This all probably sounds crazy to a lot of you, especially those embarking on your first Primal Challenge after a lifetime of standard high-carb eating where a skipped meal means misery and hypglycemia.

I promise it gets easier. And fasting bestows a host of benefits that make life easier, better, and healthier. You have the freedom to not eat, rather than look desperately around for a snack when the hunger pangs set in. It’s a great way to reduce calorie intake without it being a constant exercise of willpower. It can even improve your brain function.

And it can be as simple as skipping a meal or two once, twice, maybe three times a week. What’s the worst that could happen?

For more in depth info on fasting, check out some of my previous posts on the subject:

If you have any more questions, drop ’em in the comment section. If I don’t get to them at some point, you’ll probably be inundated with expert responses from fellow readers.

P.S. Although it would make a killer product to play around with, I will not be releasing a transdermal ghrelin supplement. I’m keeping it strictly for personal use.