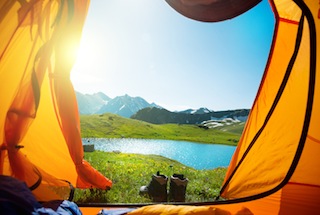 For today’s edition of Dear Mark, we’ve got a two-parter. First up, what’s the deal with phosphatidylserine, one of the (most crucial) ingredients in Primal Calm? It’s a derivative of linoleic acid-rich oil, so what’s it doing in one of my supplements? Find out if you need to worry about undue levels of linoleic acid from taking Primal Calm. Then, are there any benefits to sleeping on one’s back as opposed to on one’s side? And how about sleeping outdoors under the stars and being woken up by the birds — is there any reliable reason that would improve the quality of our sleep and help us wake up more energized?

Thank you for creating Primal Calm – I’ve recently started using it and believe that I’ve experienced a marked boost to my overall wellbeing as a result. Having thus become a believer in the benefits of Phosphatidylserine supplementation, I’ve decided to make it a permanent addition to my life, but one thing worries me – given that all the “affordable” forms of PS are derived from plant sources, won’t I be pumping Linoleic Acid directly into my brain, and, in a highly bio-available form at that? I’d be happy to boost my dosage of krill oil instead… if it had any appreciable amounts of PS, that is.

My stress is sky high at the moment, and it’s not going to let up for a long time, so I need every advantage I can get. But I don’t want to embark on long-term and high dosage of a supplement without knowing the risks. In your opinion, is the amount of PS – even, say, 450mg a day (i.e., from 3 doses of Primal Calm a day) – too small to be concerned about in regard to the fatty acid profile, even if it is entirely from plant sources? I try not to worry about every possible risk, but, you know, my brain is kinda important to me 🙂

Whenever I make a product, I do it to address a deficit in my own life, diet, or coping capacity. Primal Calm was tailor made for the high stress individual, because, well, that’s me ten years ago. With the help of improved coping strategies, supplementation like Primal Calm, and a reconfiguring of my daily routines (I take less on my own shoulders and accept more help from my employees now), I’ve gotten stress and how I handle it to a manageable level. But back when I was developing Primal Calm? Man, oh man: I really, really needed it. I was a ball of stress. A successful and productive ball of stress, as balls of stress go, but it wasn’t pretty. The vast majority of my products are to meet a personal need. I see the things that I still struggle with and figure I’m not the only one. If I’m having trouble with stress, so are lots of others.

I’ve long been suspicious of the excessive amounts of linoleic in the modern diet and their contribution to oxidative stress, and if I thought a couple hundred milligrams of the stuff were going to be a problem, I wouldn’t have put PS in my daily stress response supplement. The amount of linoleic acid you’ll get from a PS supplement is negligible. So, it’s really nothing to worry about.

But let’s say the linoleic acid is a problem. How does the “threat” of linoleic acid intake stack up against the risk posed by chronic stress? I’m no fan of massive doses of LA. And the data that previously claimed to show cardiovascular benefits from replacing saturated fat with vegetable oils high in linoleic acid is crumbling under new evidence. If there is an inverse association between LA intake and heart disease, it’s probably the nuts, not the isolated seed oils. How about stress?

I’d take the couple hundred milligrams of LA every time.

As for krill oil, it has phosphatidylcholine, a good and worthy nutrient in its own right, but its possible phosphatidylserine content has yet to be quantified or established. Take it as a good omega-3 supplement, by all means, just not as a replacement for PS.

Thanks for using Primal Calm, by the way. I’m glad it’s helping.

I was wondering what your thoughts are on sleeping position? I recently started sleeping on my back instead of on my side and I feel more refreshed in the morning. Is there anything to it or is it my imagination?

Also, I’ve started sleeping outside in a tent or on a cot about once a week. There’s just something exhilarating about waking up to the birds singing and other natural noises. Are there any health benefits?

I’m unaware of any solid research into the health effects of sleeping in different positions. Whatever allows you to get the best, most uninterrupted sleep is probably “healthiest.” But I see a few issues with how most people sleep on their sides:

The shoulders: When you place the bulk of your weight on one shoulder, that shoulder tends to sag inward. This pulls your thoracic spine on that side into kyphosis (the rounded upper back we see in laptop warriors and high-frequency texters). And that happens all night long, with your bodyweight pressing down and establishing that shoulder position as the “norm.” Side sleeping can often aggravate or even predispose a person to shoulder injuries, and if you’ve got poor thoracic mobility and a strong tendency toward kyphosis of the shoulder blades, sleeping on either side will exaggerate the kyphosis of that side.

The lower back: When most people sleep on their sides, they form a severe S-shape by curling their lower back. Bending the legs is fine and totally normal, but since a lot of people have lost overall flexibility, bringing the legs up often means bending at the lower back to accommodate the stretch.

Sleeping on your back eliminates those issues, allowing a more neutral spine and symmetrical shoulder placement. In back sleeping, your posture is more “open,” for lack of a better word, and this may allow more “flow” (for even greater lack of a better word) through your tissues. Nobody likes being all hunched over and compressed, yet that’s what many side sleepers are doing for six to eight hours a night, every night.

Sleeping outside is the absolute best. And it’s really, really good for you.

A 2013 study found that going camping for a couple weeks fully restored a person’s circadian rhythm to its natural setting. Their internal biological clocks hewed to the solar cycle. Once darkness fell, biological nighttime ensued — exactly how it works in wild animals.

“Camping,” in this study, was quite strict. The camping trip eliminated all artificial light: flashlights, smartphones, no electric lanterns blaring out pure white light once the sun goes down. Only natural light was allowed: the sun, the stars, the moon, the campfire.

One fascinating finding was that while camping, the melatonin offset occurred 50 minutes prior to wakeup. During artificial light exposure, melatonin offset occurred 2 hours after wakeup. The melatonin offset marks the low point of circadian brain arousal; this meant that camping participants never actually experienced the morning brain sluggishness because they were sleeping when it happened, while participants in the artificial environment had to contend with sluggish brains two hours after getting up. Which scenario sounds like your normal morning? If your melatonin brain offset is occurring before you wake up, that may explain why you’re waking up so refreshed.

Those natural morning noises you mention, like bird song, can also be powerful entrainers of circadian rhythm in many animals. Sounds from a “large animal colony where there were many cats” entrain the circadian rhythms of isolated domestic cats, common house sparrows’ circadian locomotor rhythms are entrained by the playback of pre-recorded bird song, and when the master pacemaker is partially disabled in squirrel monkeys, the role of sound in circadian rhythm entrainment becomes more prominent.

A 2004 study found that playing bird song to human subjects late at night in dim light (dim enough not to affect melatonin or circadian rhythm) phase-delayed their circadian rhythms. These delays were “comparable in direction and/or relative size to those produced by other nonphotic stimuli in humans, including exercise,” as well as those “produced by light.” Of course, it’s worth noting that “non-ecological” noises can produce similar phase shifts in other species, so the birdsong may not be completely necessary. Any loud noise might help.

But a Harley revving up in your neighbor’s garage at 6 AM certainly isn’t as pleasant to wake up to as a lilting nightingale’s call. Those people in the study were hearing bird calls in the middle of the night, exactly when you don’t want a circadian phase shift. But hearing bird song in the morning as sunlight streams through your tent might be just the ticket to a healthy, natural (which in this case absolutely means “good”) circadian rhythm in tune with the sun.

That’s it for today, everyone. Let’s hear from you:

Have you tried phosphatidylserine? Notice any benefits? How do you like to sleep? Back, stomach, side? And if anyone out there’s slept outdoors, has it helped?