As a loyal Worker Bee ever-skeptical of Conventional Wisdom, I’ve always been puzzled over the idea of fat free versions of fat and cream-based foods. Fat-free mayo, fat-free whipped cream (er, just what the hell are they whipping?), fat-free cheese – how are they wrought? What manner of culinary wizardry can make a delicious, creamy version of ranch dressing without all that artery-clogging fat? They must be doing something right, because they almost outnumber their full-fat counterparts on the shelves. And the people I see frequenting the aisles are always trim, slim, and full of vitality. Plus, what with the nationwide rates of diabetes, obesity, and heart disease plummeting to all-time lows just as the fat-free movement finally seems to be picking up steam, I think we can thank the good folks of Kraft, Best Foods, and Lean Cuisine for their commitment to public health.

And so I set out to peruse the aisles of the local supermarket for evidence of these shining beacons of health and chemical ingenuity. I hoped to discover the secrets so that I might recreate the delectable food products at home and avoid messing up my kitchen with “recipes” and “raw meat” and “food.”

Now, I’m not a huge fan of the conventional, full-fat versions of bottled dressing, but something about a zero-fat version of a dressing that normally has a base of sour cream, mayonnaise, and buttermilk just doesn’t seem right (or even really possible). As I understand it, ranch is supposed to be creamy and thick; mayo, sour cream, and buttermilk would take care of that. So what does Kraft put in its fat-free dressing to make it creamy?

A quick look at the first online ranch dressing recipe to pop up on Google mentions a few basic elements: mayo, sour cream, buttermilk, shallots, garlic, salt, pepper, vinegar, dill, various herbs. It sounds pretty tasty and, though it may not be completely Primal, reasonably edible. At least it’s all real food (provided you make the mayo yourself, of course). As for the Kraft fat-free ranch dressing? First four ingredients, in order, are water, corn syrup, vinegar, and high fructose corn syrup. Mmmm… nothing makes a delicious, creamy sauce even creamier like water! The doubling up on corn syrup varieties? Genius! I’ve always said that regular corn syrup just isn’t the worth the trouble without a healthy dollop of high fructose corn syrup added to the mix. Next are whey, modified food starch, and salt rounding out the bulk of the ingredients. The last six lines are dedicated to a number of chemicals, agents, colorings, and flavorings, all of which comprise less than 2% of the finished product. I’d imagine it’s the modified food starch that makes it “creamy,” especially when combined with some nice, thick corn syrup and seasoned with disodium guanylate and disodium inosinate. The carbs per serving are 11g, only 3g of which are sugars… where’d all the corn syrup go? Is this even food?

Jokes, aside, I’m not saying the full-fat versions of these bottled dressings are good for you. After all, they’re usually made with oils like soybean or canola and rich in polyunsaturated fats, not to mention the sugar. But at least the poor bastards who slather their iceberg wedges with the stuff aren’t lying to themselves about health. This fat-free stuff, though, comes with no guilt attached. In fact, it’s even called “Free Ranch.” Free, as in: don’t hold back!

At least there’s no fat, right?

Again, what the hell? Good mayo comes from high quality oils blended with egg yolk, lemon juice, mustard powder, salt, and pepper. Without fat to emulsify, where is Kraft possibly getting the creaminess (note: regarding whether the fat-free mayo could actually be accurately described as “creamy” is unknown; I was unable – or unwilling – to verify this claim with a taste test)?

A quick look at the ingredient list gave me the culprits. Modified food starch, our old friend, was back, along with high fructose corn syrup, sugar, and a touch of soybean oil. Soybean oil? But how do they include oil while excluding fat? Perhaps the alchemists at Kraft have isolated the “oily, viscous, emulsifiable” properties from the evil lipids themselves. Hats off, gentlemen.

Whatever they did, they came up with an amazing condiment. An entire tablespoon contains only 10 calories, 2g carbs (1g sugar), and little else (maybe a bit of magic?). Spread that on some whole wheat with a few slices of imitation deli meat and a slice of fat-free cheese, and you’ve got yourself a hell of sandwich. Sure, you might get a blast of insulin released into your blood, but who’s keeping track?

This, I don’t get at all. As if processed cheese product in plastic sleeves wasn’t bad enough, the American Heart Association, drawing on its infinite wisdom, puts their stamp on fat-free, American-Flavored (what exactly does American Flavor taste like? I’ll pass, thanks) Smart Slices. Strangely, these guys don’t even try to pass their “food” off as cheese; nowhere on the package is there any allusion to real food of any kind.

There’s even a comparison chart between “pasteurized process cheese food” and Smart Slices (wow, way to set the bar high, guys), which Smart Slices “wins.” There sure are a lot of claims being made on the package, though. Cholesterol free. Lactose free. “Healthy fat free non-dairy slices.” Slices? At least Kraft calls its stuff “food product.” These guys can’t even legally say their product is food.

I do like how its counterpart to the left, Veggie Slices, feels it’s necessary to proclaim, “Melts great!” All this “Healthy! Fat free! Delicious! Melts great! Fights heart disease!” stuff makes me think of Shakespeare: “Now the lady doth protest too much.”

I won’t even get into the ingredients, except to say that yes, modified food starch plays an integral role.

Instead of fresh whipped cream, health nuts descend upon these tubs of whipped hydrogenated vegetable oil. Yes, that’s what this stuff is made of – along with water, corn syrups, various gums and chemicals. The oils are coconut and palm kernel, but they are fully (not partially; these people don’t mess around!) hydrogenated for maximum shelf life.

Curiously, there are extensive instructions for long term home storage on the package, including how to freeze and thaw the tubs effectively. Are people really buying this much Cool Whip at once? Why?

Oh, and don’t stir your cool whip; it apparently exists in a fragile state of fluffy creaminess and “excessive stirring… will cause product to soften and become watery.” Hey – it ain’t easy turning hydrogenated vegetable oil into whipped cream. It’s a delicate process!

Being oil, there is a bit of fat remaining. 1.5g, to be exact, and it’s saturated(!), so don’t expect any stamps of approval from the AHA anytime soon. That stuff kills, you know.

The makers of industrial ice cream have happened upon an ingenious new marketing buzzword: churned. While you may hear the word and think of robust maidens with Popeye-forearms slaving over a barrel of fresh milk, that’s not what passes for churning these days. Nowadays, gigantic vats of reduced fat cream and milk are subjected to enormous mechanical churners that “churn slow” so as to keep temperatures down, “stretching and distributing” the fat molecules widely and sticking pockets of air in between. The result, they say, tricks our taste buds into thinking the ice cream contains normal levels of butterfat. 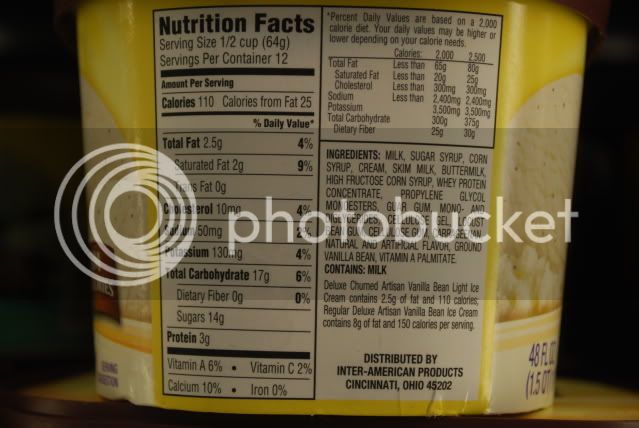 The sugar, of course, remains the same.

Dairy-free creamer sounds insane, especially when it’s packed with tons of sugar and corn syrup, but I thought I’d draw your attention to something very interesting. Apparently, Nestle has created a new type of fat. If you look at the nutrition facts for their French Vanilla flavor, they list 1.5g of total fat – without clarifying as to what type of fat we’re talking about. Is it saturated? Nope, 0g of that. Is it monounsaturated? 0g of that, too. There’s also no trans nor polyunsaturated fats, according to the label. So what did those wily chemists come up with this time?

The reality is that as long as a product contains less than half a gram of fat, it can be labeled “fat free.” The same goes for the various types of fat. If a product has 0.25g of PUFA, it can be listed as having 0g. Some might consider this pretty devious and dastardly; I just look at it like Nestle is giving us a fun new game to play (with our health): guess the lipids!

Immediately after snapping the last photo of cheese-esque sliced product, I was approached by the manager. In a calm, but forceful tone, he asked me to explain myself. “Taking pictures,” I said, taking the obvious route. “You need permission from Ralph’s to do that,” he replied.

We both knew he had me. I didn’t have permission from Ralph’s (I didn’t even know how to contact “Ralph’s”; was he referring to the corporate office – who would undoubtedly disapprove of my objectives – or the actual, legendary Ralph himself?) and I didn’t have a good enough explanation. From the looks of him, he wasn’t an MDA reader, so that angle wouldn’t work. I actually pictured this mild-mannered regional manager dashing my camera to the floor and stomping on it for good measure; this would confirm my conspiratorial, sneaking suspicions that the whole store was complicit in knowingly peddling unhealthy fare disguised as nutritious food. But he did not, instead regarding me with friendly eyes until I let myself out, camera intact and pictures secure.

My trip to the inner aisles of the grocery store left me in a state of disbelief. I knew what I was in for, but I still came out amazed. I’m amazed that people can continue to deceive themselves into thinking what they’re eating is actually food, let alone healthy food, and I’m amazed at the cunning of food marketing that plays off this deceit. While it’s sad that the American Heart Association actually promotes some of these products as “heart-healthy,” I can’t say I’m surprised.

I soon returned to the comfortably Primal confines of MDA headquarters, confident that I had made the sound dietary choice and telling myself I would heretofore stick only to the perimeters of the grocery store.

Humor for Health: What Modern Science and our Evolutionary S...

My New and Improved Diet