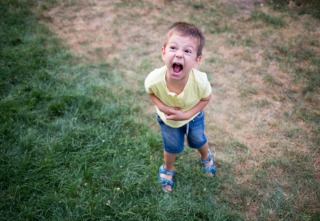 Last week, Chris Kresser wrote a great article discussing the emerging—and likely causative—link between poor gut health and childhood misbehavior. He explained potential mechanisms for the association, as well as solutions to counter it.

But as any parent knows, getting a picky child to adopt your arsenal of perfect gut-supporting foods and supplements isn’t always easy. Not every kid immersed in the righteous anger of the terrible twos will stop what he’s doing to drink sauerkraut juice, nibble on kimchi, take resistant starch, drink kefir and bone broth.. It’s certainly a major part of the problem and the solution, but are there any other dietary causes? What else can a parent try to stem the flood of tantrums?

Artificial food coloring hijacks the visual system designed to spot ripe fruit. It’s partly why kids gravitate toward bright green, red, yellow, and orange junk food. These colors are attractive to us, in part, because for most of human history they indicated the presence of ripe fruit.

Remember: our color vision also evolved so we could spot venomous snakes lurking in the foliage. Tens of thousands of parents consider these food dyes predators in their own right, swearing their kid goes berserk after a few handfuls of neon candy.

The FDA has even looked into it, admitting that dyes might affect kids with preexisting ADHD. Others think the feds were too cautious (or just plain dishonest), and more recent research has shown that food coloring can affect kids without ADHD, too.

That said, a 2013 study of 8- and 9-year olds in Hong Kong failed to find an effect on behavior, even on high doses of artificial food colors, so it’s not an absolute, universal relationship.

You could look for “natural” food dyes on nutrition labels. These usually use things like turmeric and paprika to make colors. Or you could just avoid “dyed” foods altogether. Just because your organic gojiberry lollipop uses saffron as a colorant doesn’t make a lollipop a good idea.

Is there a sugar crash? Experts say it doesn’t exist. But they also say adult reactive hypoglycemia—where eating refined carbs causes a big spike in blood glucose followed by a sharp decline and extreme fatigue, hunger, and irritability—doesn’t exist, either.

We do know that when blood glucose falls below a certain level, adrenaline is released to liberate body fat and provide energy. A 1995 study found that this effect occurs at a higher blood glucose level in kids compared to adults. The response is also stronger in children. When their bodies sense low energy availability, the adrenaline response is twice as high. That’s why your average child shouldn’t practice IF, and it’s why coming off of a candy bar, Slurpee, or slice of birthday cake hits them harder than it does us.

Not all sugar is the same though. The source matters. One study found that kids who ate more sugar from fruit snacks had a lower risk of ADHD. Total sugar intake had no relation overall.

Sugar-sweetened beverages seem to be the real baddies. They are consistently related to ADHD risk. They’re loaded with sugar in an easily digestible medium; a 40-pound toddler with a bottle of soda can easily ingest 40-50 grams of sugar without even thinking. These often come with the aforementioned artificial food dyes. To boot, they also usually contain caffeine, which is a bad idea for children.

I remember being on vacation with the family one year. My daughter was about 3 or 4 and adamant that she go vegetarian “just like Mommy.” Previous to this she was a fairly big meat eater. So for the first week of the trip she avoided meat entirely, instead opting for noodles, rice, and veggies. The tantrums were unbelievable by about the fourth day. Exploding over nothing. Tantrums, in other words. She was eating plenty of calories, so it wasn’t that.

I’d had enough. I went down to the butcher around the corner, bought a steak, brought it back to the condo, and grilled it. She ate it and almost immediately went back to her sweet self. Ever since then I’ve been a big believer in the magical properties of a well-cooked (not well-done) steak.

What about the research?

Meat as an early complementary food boosts head circumference. Unless those infantile carnivores are laying down extra skull for no reason, it’s safe to assume they’re building bigger brains better able to deal with the world rationally. Okay, maybe not rationally. These are kids we’re talking about.

Red meat provides zinc, a crucial nutrient for behavior regulation. Zinc deficiency is involved in the pathogenesis of ADHD. In the above study, meat-borne zinc levels predicted head circumference.

Red meat provides B vitamins. Deficiencies in B vitamins are associated with behavior problems in teens, and perhaps younger children, too.

Red meat provides protein, and protein provides good blood sugar regulation. Every bite of red meat a toddler eats is something other than a bite of sugary refined carbs.

Pastured chicken liver is extremely high in iron, folate, choline, B12, and protein, with a decent amount of zinc. And although it is higher in vitamin A than most other foods, it’s lower in vitamin A than other livers, so you can feed it a bit more often—maybe once or twice a week. The real beauty of chicken liver is the taste: it’s far milder than ruminant livers. Your mileage may vary.

Maybe the kid’s already eating this way (since the parents are card-carrying Primal Blueprinters). And there’s a good chance that ditching dairy and grains will have no effect on behavior. The scientific literature is certainly underwhelming. It’s worth a shot though. The anecdotal literature is rife with parents who report behavior problems disappearing once they addressed and resolved food intolerances—and dairy and gluten are fairly common ones.

Give your kid a chance.

Kids can eat well. They will eat well. They don’t have to subsist on hot dogs (grass-fed or not), chicken tenders (gluten-free or not), french fries (fried in tallow or not), and pizza (or meatza). If you give the kid a chance and offer some “adult” options, you’ll probably be surprised at what they try—and like.

Also, let them in the kitchen. Pull up a chair for them to stand on and reach the counter. Let them stir, mash, and even chop. Getting kids involved in food prep won’t just pay off six years down the line when they’re making dinner for the family. It forces them to have skin in the game. They’ll be more likely to want to eat something they had a hand in.

The emergence of the ego—the toddler’s realization that he or she is a separate being with desires and the executive agency necessary to achieve them—lies at the heart of the terrible twos. A moderate to large dose of psilocybin (or any of the related psychedelics) will destroy the ego, shatter the self, and return the child to an edenic state in congruence with the rest of nature.

Note: I’m kidding about that last one, of course.

But all the rest are legitimate interventions to try. If you have any others that worked for you and your family, let me know below!