Should You Favor Time or Money? 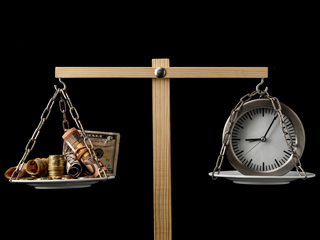 Time and money—the sources of endless hand-wringing in modern society. No one ever seems to have enough, including the people we think probably do. Instead of struggling with primeval conditions of scarcity, many of us are encumbered with the so-called “first-world problems” of modern day. For most of us, there’s a whole range of choices and flexibility that Grok never had. That said, when we bring a Primal perspective to the fore, just what is a healthy and productive relationship to time and money? And how much of each do we need to be happy?

The fact is, our primal ancestors operated with a very different economy than the capitalist system many of us live and work within today. Social and cultural organization in Grok’s day, while far from “brutish,” was still unsophisticated with none of the luxuries or stressors that accompany advanced
economic structures. Grok and his kin still certainly needed and wanted things. It shouldn’t be much of a surprise that even our Primal ancestors were attracted to form as well as function. (Evidence of shells and beads used for fashion date back to over 80,000 years ago.)

But no doubts about it, our primal ancestors lived in a world of relative material scarcity when compared to ours today. Their innate interest for the new and shiny, an adaptive characteristic that encouraged creativity and favored innovation, was naturally capped by the dearth of resources—or the work it took to produce items from their raw forms. As a result, Grok and his people had all the instinct for invention and collection of “things” but with a limited variety and quantity of actual possessions.

Today we obviously live in a very different scenario. We not only retain the natural inclination toward the new and novel, but have the ability to get it (or at least a lot of it). And at times, we get too much of it. This begs the question: how do we reconcile our primal desires with the modern infinitude of opportunity to indulge them? Call it the burden of choice if you will.

In a global economy where a few clicks can hunt down and ship just about anything we could ever dream up, what’s tempering our innate desire for accumulation today isn’t scarcity of options—it’s money and time.

Most of us have a limited amount of money, and we give up our time in order to earn it. In short, we “spend” our time to be able to “spend” money on the things we need or want. Less time working means less money to spend. But it also means more time to enjoy life.

To put it bluntly, we each are in a position (albeit some more comfortably and flexibly than others) to decide how much life we’re going to give up in the pursuit of possessions.

Yes, most of what the majority of us earn goes toward shelter, food, basic utilities, health related costs, and savings for future security. Even within that narrow band of essentials, however, many of us are still working with quite a free range of possibility. Will we live in a place where housing expenses run high, or will we move somewhere with a lower cost of living? How large of a house do we need to live in—and pay to heat, cool, furnish, repair, etc.? What will we pay to make it look the way we want it to?

And then there are those things we may not call necessities but unconsciously accept as default purchases. Things like smart phones or cable T.V., for example. Or even larger cars, snowblowers, lawn equipment, and the like. Our consumption is much more subjective than most of us would automatically assume.

Of course, many of us also bring values to our purchases that go beyond the personal time-money equation. We opt to pay more to support local businesses or “fair trade” exchange, or to buy from companies that institute certain environmental or humane production practices. We’re willing to work harder and longer to buy something that we feel makes a positive impact on our greater world.

And that doesn’t even crack open the influence of our other preferences—whether in the taste, color, material, brand, store, etc. for what we purchase.

Given this complicated picture, how do we decide when we have enough money—when we’ve reached that earning sweet spot where spending any additional time in pursuit of more things just doesn’t offer appreciable added good to our lives? How do we divvy up our life between time earning money to keep or acquire things and time enjoying family, friends, hobbies, health and other joys of life?

In short, how do we want to balance living with making a living?

It’s important to take a minute to pay attention to what comes up when you ask yourself that question. What reflections, justifications, resistance, hopes, resentments, gratitude, regrets, and visions does that question evoke?

Maybe we’ve felt overwhelmed by our mortgages for years or feel pressured by our current lifestyles or financial obligations. Perhaps we resent the hours we put in or the commute we do every day to maintain our current job. Maybe we’re celebrating some good choices we made (either recently or long in the past) that have allowed us to enjoy life more on our own terms. Maybe we regret certain decisions and wonder how to get back to a time when our needs were few and life felt a whole lot simpler.

Studies have demonstrated time and again that money increases contentment with one’s life only up to a certain income. Once basic needs are easily and consistently covered, researchers say there’s no further “progress” in the average person’s emotional well-being. A 2010 Princeton study settled on $75,000 a year for that threshold income, which has also been broken down by state and updated for 2015. Other research suggests today’s equivalent would be $83,000. Or, alternatively, that $50,000 is the better benchmark for life satisfaction.

But there’s something about any of these numbers that feels arbitrary and reductive. I’m sure we all know people (or fit this category ourselves) who have led happy, fulfilling, even enviable lives on much lower incomes—and know people who have huge incomes and never seem to be satisfied with anything.

Experts agree that how we live is much more important than how much money we have to live on. Research into the “happiest” countries of the world reveal that collective affluence isn’t the primary factor. (Mexico, for example, beat out the U.S. on that list.) Financial security, as indicated by the high rankings of Scandinavian countries, appears to be a positive factor. But again, this is only one influence among many, including the freedom to make one’s own life choices and one’s personal practice/perception of generosity.

Clearly our experience of abundance or abundant living isn’t easily quantified. Many countries that rank high on the “happiness” list also have shorter work weeks and/or ample vacation time. Again, time to enjoy what we have is often the scarcest and most underestimated commodity.

For some of us this might mean looking at options to decrease the amount of time we spend at work. It could be as simple as taking all of our allotted vacation time or looking for a job that requires fewer work or commute hours. It might entail transitioning to a different field in which you have the option of earning more money for less time investment.

Probably easier and more immediate for most of us, however, is examining where our money goes and making a conscious decision to reduce our perceived “needs.” Adherents of the “minimalist” lifestyle movement prioritize the freedom that comes from having fewer needs instead of pursuing more income—and it’s taken a recent foothold in popular culture. While plenty of mega-mansions are built every day, we’re also seeing the rise of “micro” homes.

These days, you also hear more about old-fashioned bartering—for everything from child care to business services. The Internet, of course, makes it easier to share rides, trade homes, or exchange labor. And in most cases, everybody wins.

Beyond the particular choices (e.g. “tiny houses), I think the real power here is this: in letting go of the idea we need to fully participate in the economy at-large and the social customs and standards that dominate, we open up the possibility for redrawing all kinds of boundaries, connections, and openings in our lives. We stop comparing our lives to others’ and finally find our way off the track we thought we had to be on.

When you begin with the notion that most of the rules you thought you had to live by aren’t carved in stone, and when you make the decision that the status quo doesn’t apply to you, more seems up for grabs than you’d thought possible. You start to think about the life you want and feel more flexible in letting go of old defaults. You become open to options you wouldn’t have considered before. Needs and wants shift considerably. Your thinking changes, and somehow you find others who think that way, too. Once you tap into that personal, vocational and economic momentum, life can change in significant ways if we really want it to. And when that happens, the trade offs between time and money—and how you should allocate your efforts to achieving each—usually become pretty clear.

So, I’m curious—how have you reconciled your need for time and money (or the things money buys)? What values have you come to prioritize as you organize your life and budget? Has Primal living influenced your thinking or choices?

Share your thoughts on the board, and thanks for reading. Have a great end to your week, everyone. 51 thoughts on “Should You Favor Time or Money?”