Should You Eat Less Protein? 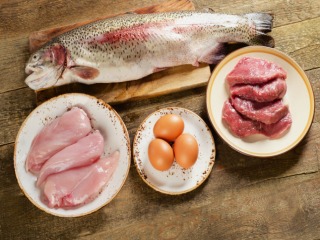 Over the past several years, I’ve noticed a subtle shift in the way the media discusses dietary protein, with many experts promoting lower intakes. The push for lower intakes hasn’t only come from the mainstream crowing about red meat and colon cancer. Many voices from the alternative health communities are urging a reduction in protein. Even the ancestral health community counts among its ranks protein skeptics.

Am I one? I’m not sure. In past posts, I’ve discussed how my own tastes have changed, going from eating high protein to more moderate amounts.

Today I’m addressing the standard arguments levied against high protein intakes. Hopefully, we can get to the bottom of the issue.

While it’s true that people with existing kidney damage or disease must limit protein intake, this isn’t the case in healthy people. Even type 2 diabetics with good kidney function can safely eat a long-term high-protein diet. If anything, higher protein intakes protect against kidney disease by making it easier to avoid obesity.

Protein metabolism begets ammonia, a toxin. The liver usually converts ammonia into urea, which is safely expelled through the urine. The average human can handle about 230 grams of protein before ammonia-urea conversion tanks. After that, ammonia lingers. If your liver health is compromised, or your protein intake exceeds your ammonia detox capacity, ammonia toxicity can ensue.

Acute ammonia toxicity is neurotoxic, actually causing your astrocytes to swell. Rabbit starvation, which afflicted Arctic explorers living exclusively on lean protein (rabbits) and causes nausea, diarrhea, and eventually death, might derive from ammonia toxicity. A subtler, lower-grade ammonia toxicity likely exists in people with chronically-high intakes of protein. The dangers are mostly theoretical but based in physiology—ammonia is a toxin, and there is a limit to how much of it we can convert to urea.

Sufficiently high intakes of protein can exceed the gut’s capacity to absorb it. The protein then passes on to the colon, where colonic bacteria ferment it and produce metabolic byproducts like ammonia, indoles, and phenols. As many of these compounds can have toxic effects, some have suggested that excess protein fermentation produces a toxic gut environment.

High protein diets give you cancer.

Vegans love citing the T. Colin Campbell research from the China Study, which appeared to show that high intakes of protein caused increased cancer deaths. While adequate intakes of protein (from casein) promoted the growth of existing tumors in those rodents, it also protected against the mutagens that cause the initial appearance of tumors. Protein was protective against cancer until they had it, at which point it accelerated the cancer’s progression. Rodents on the low protein diet were more susceptible to getting cancer after aflatoxin exposure. Once the rodents already had cancer, low protein was protective against further growth.

More accurate: adequate protein protects against the initiation of cancer (and probably other maladaptive ills), but patients with cancer should limit it. That makes sense. Context is everything.

Through the process of gluconeogenesis, we can convert protein into glucose. This has led some folks to believe that eating “extra protein” is like eating a piece of chocolate cake. So, does a high protein diet spike glucose levels? Is eating more protein just like cramming in extra sugar?

In one study, type 2 diabetics ate half a pound of steak (50 grams protein) and nothing else for breakfast. Compared to the control group who just had water, 50 grams of protein had almost no effect on glucose levels, adding just 2 grams to circulation. In another older study, eating up to 160 grams of protein in a single meal had no effect on blood glucose.

On the contrary, high-protein diets have been shown to improve glucose control in the population most at risk from high-carb intakes: type 2 diabetics.

Protein is the most expensive macronutrient. In the wild, it takes the most energy to acquire. In the civilized world, it costs the most money to purchase. If we don’t need large amounts of protein, it makes sense to reduce our intake.

Many people lifting weights and cramming down protein shakes likely are eating more protein than they need. The more advanced you are as a lifter, the less protein you need. Beginners gain weight like crazy; experienced lifters do not.

Advanced lifters are closer to their genetic muscle ceiling. There’s less room to grow, so they grow more slowly, and muscle protein synthesis actually declines. Plus, their muscles have become more resistant to exercise-induced breakdown. It takes more to damage them, and there’s less to recover from. Overall, experienced lifters are more efficient with their protein and can maintain nitrogen balance at 1.05 g/kg. If they want to gain muscle, 1.8 grams per kg (which is much lower than most people assume) seems to be the absolute ceiling for natural lifters. After that, the benefits level off, and you’re just wasting protein.

IGF-1 is an important compound that helps us build and maintain bone and muscle mass. We need it to thrive, yet excessively high levels of IGF-1 may increase growth of unwanted tissues like tumors and hasten the aging process.

That said, there’s no indication that IGF-1 increases the formation of tumors. As in Campbell’s rats, it’s likely that IGF-1 makes the organism more robust, but once cancer is present, hastens its growth. And the proposed link between elevated IGF-1 and mortality in humans hasn’t been confirmed. It looks like both high and low levels are bad.

When older people eat more protein, even (or especially) if it comes from evil red meat, they get stronger, build more muscle, improve their ability to take care of themselves, and even think better. The studies didn’t track mortality, but loss of muscle, strength, independence, and cognitive function typically precede death in senior citizens. If higher protein intakes can improve those parameters, they should also improve survival in the population.

Another wrinkle is that dietary protein—especially of animal origin—is the best source of cysteine, a crucial backbone we use to produce the endogenous antioxidant glutathione. A group of researchers recently proposed that a reduction in glutathione synthesis “underlies” the increased mortality linked to low protein intakes in the elderly. Glutathione protects our liver, helps metabolize toxins, and regulates oxidative stress; glutathione deficiency in older populations has been linked to neurodegeneration, heart attacks, and “accelerated aging.”

I’d advise against a low-protein diet unless you have an express reason to do so. You’ll likely grow lethargic, lose muscle mass, gain fat mass, and be less resilient in the face of stressors and illnesses. Maybe it’ll buy you an extra year or two, but at what cost? Low-protein diets have been shown to:

Meanwhile, high-protein diets confer a few potential risks, which I’ve laid out above.

There are clear benefits to higher protein intakes (lean mass retention, muscle growth, fat loss, increased satiety) and legitimate concerns (reduced longevity, excess IGF-1, too much growth of unwanted tissues). How do we square all the evidence? How do we balance the effects?

Short term is fine: Brief bursts of very high protein diets while lifting heavy things can probably help you shed excess weight and retain lean mass. Recent studies find evidence of improved body composition and no evidence of any deleterious effects up to 4.4 g/kg for several weeks at a time. I’m not sure I’d continue eating that much protein for the rest of your life though.

Go high and low: Eat high protein one day, lower protein the next. If you’re trying to gain muscle, you probably need more protein on workout days. If you’re just maintaining, you can get away with far less.

Overall, I’d say using 100 grams per day as a baseline and going as low as you can without suffering the negative symptoms is worth exploring. It’s likely enough for the majority of people reading this, and if you cycle your protein or fast, you give yourself a chance at some nice autophagy and healthy growth. Plus, you can always increase your intake if you notice negative symptoms.

Athletes aiming for muscle growth and endurance athletes trying to avoid muscle loss may go up to 1.8 g/kg. Dieting athletes should probably go at least that high to preserve lean mass.

Be sure to check out past posts on conditions that determine if you need more or less protein.

Now I’d love to hear from you.

How much protein do you eat each day? How do lower—or higher—intakes affect you?