When bright orange, eye-catching displays of oddly shaped pumpkins take over the entrance of markets, don’t walk on by thinking that pumpkin only belongs in two places: baked into a pie or set on the porch with a candle stuck inside. Pumpkin is a seasonal pleasure to be indulged in, not only because it has a delicious mild, sweet flavor but also because it’s loaded with antioxidants, beta-carotene, vitamins C and E and potassium.

Pumpkins can be stored at room temperature for weeks and sometimes months, so they can do double-duty as a decoration until it’s time for a veggie slaughter. For eating, choose smaller pumpkins (4 pounds or less) since they have better flavor and texture. Just because pumpkins have a sweet flavor, don’t think they have to be served sweet – a sprinkle of sea salt, garlic, fresh herbs, cumin, paprika and other spices all turn pumpkin into a savory vegetable. A coating of butter, olive oil or animal fat will coax the texture into being creamy, rather than stringy, and a side of beef or pork turns pumpkin into the perfect autumn meal.

To cook a pumpkin, first wash the outside then slice the top off to remove the stem, as you would for a jack-o-lantern. This makes it easier to cut the pumpkin in half. Once the pumpkin is halved, scrape out the seeds and pulp with a spoon. Roasting a pumpkin will bring out the most flavor and takes around an hour or so, depending on the size. Generously coat the pumpkin flesh in some sort of fat, season the pumpkin as you wish and then cook uncovered until soft and a bit browned.

In this recipe for Roasted Pumpkin with Beef Short Ribs the pumpkin takes less time to cook than the meat, so they’re roasted separately. Cooked pumpkin soaks up sauce and flavor quickly, so once you combine it with the meat, the two taste as if they’ve been together all along. 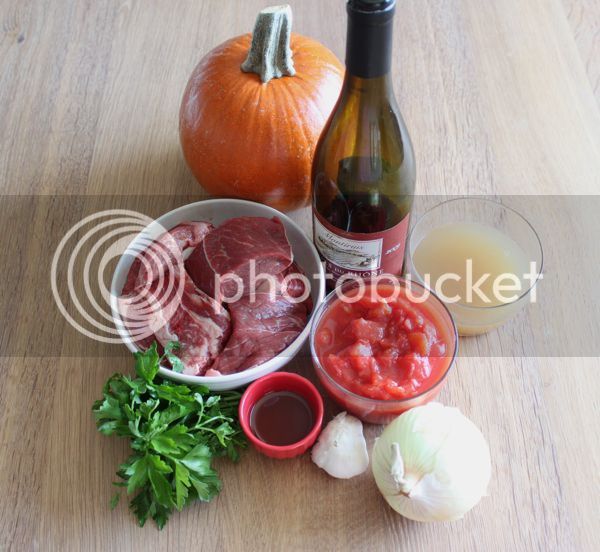 In a large, heavy-bottomed skillet or Dutch oven, heat a few tablespoons of fat/oil/butter over high heat. Season the short ribs lightly with salt and pepper and cook about 10 minutes, turning so the meat browns on all sides.

Remove the short ribs and set aside. Turn the heat down to medium and add the onion and garlic to the pan and cook until softened, about 5 minutes. Stir in the red wine, tomatoes and beef stock and make sure to scrape the bottom of the pan so the browned bits stuck on the bottom mix in. Return the short ribs to the pot and bring the liquid a boil.

Slice the top off the pumpkin to remove the stem then cut the pumpkin in half. Scrape out the seeds and pulp. You can cook the pumpkin as two halves, or cut it into smaller pieces. Drizzle generously with olive oil, butter or animal fat and season with salt and pepper. Place the pumpkin in a rimmed baking pan.

Cover with meat with aluminum foil or a lid and place in the oven. Cook for 2 hours, or until the meat is very tender.

Keep the pumpkin uncovered and cook for at least 45 minutes and up to and hour and half, checking periodically. Take the pumpkin out when it is soft and a little browned around the edges.

Before serving the meat, garnish with chopped parsley and spoon over the top of the pumpkin.