I’ve been researching flax and am ready to pull the plug on my dedicated flaxseed grinder. The kicker was seeing flaxseeds associated with prostate cancer. What?s your take?

Thanks to reader Clare for the thoughtful correspondence on flax. This is exactly why I love doing this blog. Research continues to unfold, and the conversation never fails to engage and inspire me.

As Apples know, I?ve been a flax supporter. Lately, I?ve been mulling that position. While I don?t think a single study?s results should rewrite the book on any issue, when a number of studies suggest that it may be linked to serious illness in some people, that?s enough to give me pause. And, well, it?s enough to incite me to do some digging ? and pondering. Flax is one of those cases lately.

The deal is this. Flax seed is rich in a form of omega-3 fatty acids called ALA (alpha-linolenic acid). Omega-3 fatty acids as a whole (group) are especially vital for the development and ongoing well-being of the nervous system and for the health of the cardiovascular system. They improve lipid profiles, thin blood, and combat inflammation like nobody?s business. (You know how I feel about that one, eh?) They can also help curb insulin resistance. 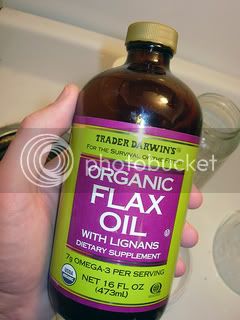 Research time and again supports the role of omega-3s (again, as a group) in overall health; however, some studies and reviews over the last few years have linked high ALA intake (from both flax oil and milled seed) with higher incidence of prostate cancer. ALA blood levels are higher in response to flax oil intake than they are with milled seed intake. (Eating whole seeds isn?t recommended unless you?re looking for some serious abdominal havoc.)

I?ve always maintained that other animal-based forms of DHA and EPA offer more health-related bang for your buck, and I stand by that point. The preponderance of research supports the particular power of EPA and DHA in the omega-3 fatty acids. One study suggests that fish intake (rich in both DHA and EPA) actually reduces the risk for prostate cancer.

The bottom line is ALA doesn?t do much that DHA and/or EPA can?t do and probably do better. As avid Apples know, I suggest that everyone take a fish supplement. In the past I?ve seen ALA as a decent secondary choice for vegetarians and as a useful addition to a healthy Primal eating strategy (e.g. a bit of ground flax seed on some berries). The human body isn?t terribly effective at converting ALA to either DHA or EPA, hence the need for added dietary intake or supplementation. (An interesting side nugget: women?s bodies are a little better at this conversion. Research has shown that young women convert 21% of ALA to EPA (compared to 8% in men) and 9% to DHA (compared to 0-4% in men). The difference, apparently, is linked to estrogen levels.)

So, what?s my current suggestion in light of the potential prostate cancer link? If you?re a woman, the obvious point of the research isn?t relevant. Nonetheless, the underlying role of phytoestrogens in flax is nonetheless an important one. I?d say that healthy women can consume low to moderate amounts of flax without concern. Sure, a large amount of research suggests the protective effect of phytoestrogens against breast cancer (in healthy women), and this research includes flax. Nonetheless, a lot of a seemingly good thing isn?t necessarily better or even safe. My advice would be to use fish oil as your primary omega-3 source and keep the ALA on the lower side.

If you?re a man? Particularly an older man? I?d definitely suggest you make fish oil your principal source of omega-3s. Is it time to chuck the flax grinder all together? Based on the research, I?d at least put it into semi-retirement. (I?d suggest forgoing flax oil entirely.) In the meantime, we?ll stay on top of this one and let you know about any new developments on this front.

As always, thanks for your questions and comments. Keep ?em coming!

Omega 3 Fatty Acids Round Up: