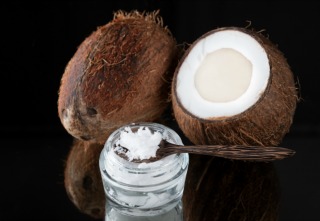 Had I entered an alternate timeline? Did the Tokelau people of the South Pacific obtain 50% of their calories from PUFA-laden soybean oil, and not saturated fat derived from coconuts? Did the Kitavans thrive on an admittedly high-carb diet not by supplementing it with coconut cream and meat, but by dousing their yams and fish in Unilever margarine shipped in from across the ocean?

I did some digging, revisited some other sources I’ve used in the past. Turns out I wasn’t crazy. Everything was the same. The Tokelau people really did show zero signs of heart disease despite eating a 50% coconut fat diet. They really did start getting fat and diabetic and heart diseased only after the introduction of wheat, sugar, and vegetable oils. And the Kitavans did eat a high-coconut oil, high-carb diet and thrived while doing it.

I could probably stop this post here. I mean, 50% of calories from coconut oil and pristine health is about as resounding a debunking of the AHA’s position you could produce. Let’s keep going, though….

When it boils down to it, the AHA’s condemnation of coconut oil is just another salvo in their futile war against saturated fat consumption. They focus only on the tendency of coconut oil to increase LDL and ignore everything else it does, even referring to coconut oil’s lack of “offsetting favorable effects.”

LDL has something to do with heart disease. Maybe it’s the LDL particles. Maybe it’s the oxidized LDL. Maybe it’s all that and more. I just wish the AHA would branch out a bit is all. For example, you’d think the American Heart Association would find it interesting that PUFA metabolites are actually biomarkers of non-alcoholic steatohepatitis (fatty liver + liver inflammation). If you want a non-invasive way to diagnose it, just look at how much PUFA they’re metabolizing. They don’t. Maybe they haven’t seen the research.

It’s hard to blame them; their entire world rests on the foundational axiom that LDL cholesterol drives heart disease. If they question that axiom, everything starts falling apart real fast. Their continued existence depends on them not noticing “offsetting favorable effects.”

About those supposedly missing favorable effects, coconut oil does many different things besides raise LDL, many of which are “good.”

It even improves cardiometabolic status in heart disease patients—the group the AHA is convinced coconut oil will kill. Patients who ate coconut oil saw reductions in waist circumference and body weight and increases in HDL. Another study also found that coconut oil reduces waist circumference, albeit with the biggest effects seen in males. That said, an even earlier study found that overweight women were able to reduce abdominal fat using dietary coconut oil. Seems to be good for goose and gander, even if the geese have heart disease.

To the AHA’s credit, a doctor quoted in the USA Today article noted, “You can put it on your body, but don’t put it in your body.” You just got permission to rub it on your skin as lotion, make it into deodorant and apply it to your armpits, and use it to condition your hair.

Personally, I put stock in actual clinical research into the topical effects of coconut oil—without the same fear-mongering around its dietary intake.

In hair, the shorter-chained fatty acids allow coconut oil better penetration to the hair proteins. This protects them from sun damage and results in less hair protein loss when compared to mineral oil or sunflower oil.

Oil pulling with virgin coconut oil (swishing it around in your mouth, making sure to get between the teeth, before brushing or eating in the morning) reduces the presence of cavity-causing bacteria in the saliva. Just don’t swallow.

The late Seth Roberts eliminated toenail fungus with virgin coconut oil. He applied a thin layer to the affected foot each day, then covered them with socks. This is just an anecdote, but we know that lauric acid—one of the primary fats in coconut oil—is antimicrobial.

In the interest of fairness, I’ll follow up with some negatives. Coconut oil isn’t a panacea.

It’s terrible for frying eggs. Maybe I’m doing something wrong, but my eggs always stick when I try to use coconut oil as the frying medium. No, I’m not adding the eggs too early. This doesn’t happen with other fats. The taste isn’t great with eggs, either, to be honest.

Coconut oil is not the same as whole coconut. The cultures that did so well on high-coconut fat diets weren’t eating spoonfuls of refined (or even virgin) coconut oil. They were by and large processing and using the whole coconut—flesh, juice, fiber, and all. It’s one of the reasons why I’ll often turn to coconut butter over oil, like if I’m making a curry. Coconut butter is flesh and fat and fiber. If you intend on emulating the Tokelau diet with 50% of calories from coconut fat, stick to whole coconut, not straight oil.

It does raise LDL. This doesn’t worry me, especially given all the “offsetting favorable effects,” but it may be an issue for certain people. Anytime you make a big dietary change—like suddenly eating a bunch of coconut fat—you should track changes to your physiology and biomarkers.

I will say this for the AHA: At least we can dispense with the accusations of conflicts of interest. After all, the coconut industry of America just pledged to donate up to $500k from coconut seed sales to the American Heart Association. For the AHA to come out strongly against coconut oil after getting such a sweet deal only confirms the objectivity of the assessment. Even if they’re wrong, they’re not biased.

Oh, wait. It was the soybean industry that pledged to donate the money to the AHA? Never mind.

Anyway, that’s my take on the latest AHA attack on coconut oil. What’s yours?