Can You Harness the Placebo Effect For Yourself? 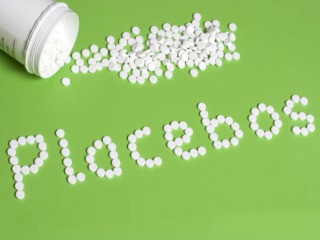 Every parent reading this has dealt extensively in placebo: the analgesic effect of the ouchie kiss. When your child bumps his head or skins her knee, the quickest way to ease the pain isn’t a Band-Aid, ice pack, or Tylenol. It’s a kiss. Works every time.

“But your kid only thinks it’s helping. You’re just tricking him.”

But I’m here to argue that the placebo isn’t just a necessary artifact of randomized controlled trials. It describes a very real effect that people can probably use to improve their lives.

Physical pain: Many people assume the analgesic (pain-killing) effects of placebo are a re-interpretation of the pain sensation. The pain isn’t actually going away, they’re just handling it better in some non-corporeal way. That’s certainly part of it, but in 1978, researchers found evidence of a “real” mechanism for this placebo response: blocking the opiate receptors with a drug blocks the ability of a placebo to reduce pain. Later, placebo responders (people who get analgesic effects from placebos) were found to have higher levels of endorphins, the very same endogenous opiates that activate our opiate receptors.

Depression: Placebo seems to work about as well as conventional treatments in mild to moderate depression. The placebo effect may even explain why antidepressants (sometimes) work. In one study, taking a placebo for several weeks before taking an antidepressant made the antidepressant more effective.

IBS: One 2010 study found that placebo treatments can improve symptoms in IBS patients, even if they knew it was a placebo. That is, the researchers told the placebo arm that they were receiving a placebo pill, and it still reduced their symptoms. I have more to say about this later on, but for now, it’s evidence for placebo in IBS intervention.

Joint pain: Several years ago, I linked to a study on “sham knee surgery.” That’s right. Patients with meniscus tears who qualified for knee surgery were randomized to either receive a real partial meniscectomy (where they actually cut into the knee) or a fake one (where they just mimicked doing it with real tools). Both groups did identical physical therapy regimens. Across 12 months of followup, both groups experienced significant and equal improvements.

Again, so what? Every thought, feeling, emotion, and internal reaction our brains experience have a physical component and deal in biological substrates. Synapses fire, neurons connect, neurotransmitters shift. These are theoretically measurable. They’re real. If there is an ethereal soul somehow wedded to, but separate from, the physical body, we have no good evidence of it. My PubMed trawl came up empty.

So what explains placebos?

There is classical conditioning. The first four weeks of a study, you got an active painkiller in red gel cap form. At week five, they switched to a placebo that looked exactly like the painkiller—a red gel cap. Your body was conditioned to associate taking that red gel cap with pain relief, so it created the analgesic effect by releasing endorphins.

There are expectations. Many placebos are based on subconscious associations, contextual clues, and expectations. If you feel comfortable with a doctor, if you’re confident he/she cares about you, if you expect to be cured or helped, your brain will probably predispose you toward a positive response.

A new wave of research is showing that placebos work better when you give them the real treatment alongside the placebo first. Then you remove or reduce the dose of the active drug while keeping the placebo and retaining the effects.

Some researchers have even used this type of placebo conditioning to reduce the dosage of toxic drugs while maintaining the positive effects. A kidney transplant patient might take the active, highly toxic immunosuppressant alongside a very distinctive placebo (in one case, cod liver oil with essential oils). Each time she takes the drug, she sips the cod liver drink. The body figures out how to replicate or emulate the effect of the drug, by itself or at a lower dose.

If you can pull it off, the advantages of a placebo are obvious:

They’re less risky. Most “active” therapies confer some degree of risk, however small. “Inert” placebos have a much lower risk of causing unwanted side effects. They can facilitate lower doses of harmful treatments.

They’re getting stronger. All signs point to the placebo effect gaining strength in the population, with placebo controls performing better than ever against drugs. Yeah, it’s weird, but it could be a powerful ally if you can harness it.

Everything benefits from the placebo effect. If a doctor gives you an active drug, you’re getting both the placebo effect (the expectation that it will work) and the biological effect (whatever the drug’s designed to do).

But can you harness the placebo effect for yourself in your own life?

One wrinkle is that placebos work best when you don’t know it’s actually a placebo. I know, I know: everyone cites that IBS study where patients knowingly took “inert placebos” and still saw subjective improvements. They weren’t quite inert, though, because researchers told subjects the placebos might induce powerful “mind-body” effects that could improve their condition. A suggestion like that from a health authority figure can be very compelling. Telling a person “I’m giving you a sugar pill” without mentioning the mind-body potential likely wouldn’t have the same effects.

Another more recent “placebos work even when they know it’s a placebo!” study fell a bit short of the promise in the headline. Subjects were given a fake treatment, told it had no medical value whatsoever, and it still provided pain relief. However, they had to spend four weeks being convinced that it was biologically active, after which the ruse was revealed, for it to work as a placebo. That’s a placebo in that it doesn’t contain a biologically active pharmacological agent, but it’s also powered by the researchers’ conditioning.

Besides, it’s still another person—an authority—giving you the placebo. You can’t “give yourself” a placebo and hope for the same results.

Placebos don’t always work for every situation. They don’t seem to accelerate wound healing, for example. Placebos can help against cancer-related nausea and pain, but I wouldn’t trust one to shrink tumors.

Interestingly, your response to placebo has a genetic component. Certain variants of the COMT gene, which codes for dopamine metabolism, increase the effect of placebos. Other variants reduce or abolish it. Variants in genes involved with serotonin metabolism can predict a person’s placebo-induced anxiety relief. It’s possible (and likely probable) that other genetic variants affect other aspects of the placebo response, too.

But just because dosing yourself with sugar pills probably won’t improve IBS, anxiety, depression, or Parkinson’s without the right genes and a white coat conditioning you to believe doesn’t mean the placebo effect is useless.

What’s important is the expectation that something will happen. The belief that thought can alter matter. Not telekinesis or magic, but the simple acknowledgement that mental processes are biological.

Belief is the key here.

Scott Adams (of Dilbert fame) credits, or at least closely correlates major career milestones to the use of daily written affirmations. He’s not quite sure why (or even if) they work. He just knows they appear to for him. Maybe your subconscious opens itself up to opportunities that were always there. Maybe after writing them you just pay closer attention to anything that might help you reach your goal. Maybe the placebo-ish effect of belief in the power of whatever enables the affirmations to work makes you a better, more effective person.

Ultimately, believing in a cause greater than yourself might provide the biggest placebo effect of all. It could be a deity, a concept like honor/chivalry/bushido, your family, your business, your art. Anything at all should work, so long as it deserves your true loyalty and dedication. Don’t expect this kind of “placebo” to fix your bum knee. But it may create movement for a whole lot else that’s wrong in your life.

I’ll be frank. I’m not all that convinced an individual can revolutionize his or her life by “harnessing the power of the placebo.” Learning the placebo mechanism and trying to apply it to your life reminds me of explaining the joke: you ruin what made it work.

You know what could work?

Giving everyone else a little placebo love.

You already know, and you may have compromised your ability to placebo yourself. But they don’t have to know. They can still believe.

Many of you are coming from a place of authority in your immediate circle. You’re the person who everyone comes to for help with diet and exercise. When a buddy’s trying to decide between CrossFit and powerlifting, he asks your opinion. If your coworker wants to drop 15 pounds for her wedding, she asks you for advice. You’re the health person.

Own it. Give them confidence. Give them good advice and convince them it’ll work. That’s the placebo effect + active treatment effect.

Make them believe in themselves and what they’re doing.

That’s it for me today, folks. Let’s hear down below in the comment section:

What did I miss? Have you ever used the placebo effect on yourself—knowingly?

I know I have some brilliant readers. Let’s get some ideas flowing.