Anxiety: Are Nutritional Deficiencies a Common Cause? 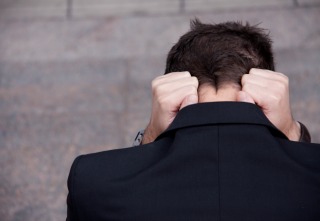 As big-brained hominids, humans have the unique ability to think about the future. The very fact that we can perceive and plan for the time ahead has allowed us to conquer the earth, but it comes with a downside: anxiety. If extreme rumination on past events characterizes depression, worrying about imagined future scenarios describes anxiety.

This inherent capacity and human tendency to think ahead must be reined in and controlled. One way we can do that is make sure we’re getting enough of the nutrients that studies indicate may play an etiological role in anxiety.

This is different from supplements with various ingredients that treat or help anxiety. There’s obviously overlap, and some of the deficiencies mentioned today can be corrected by supplementing, but I’m focusing on essential nutrients—vitamins, minerals, and other food-borne compounds—that play important roles in regulating anxiety levels.

This is the part where I’m supposed to say something about magnesium regulating over 400 physiological processes. Instead, I’ll skip that and go with this: Magnesium is incredibly important, seems to play a big role in anxiety, and most of us don’t eat enough of it.

Magnesium supplementation reduces subjective anxiety (the only kind that matters) in the “mildly anxious” and women with premenstrual syndrome.

Older adults with low choline levels have a higher prevalence of anxiety (but not depression), while higher levels appear protective. This doesn’t prove causality—people with psychiatric disorders might eat different diets lower in choline—but I strongly suspect it. Choline and anxiety may have a trans-generational relationship, too, as animal studies show that choline supplementation during pregnancy reduces the chance that offspring will develop anxiety disorders.

Egg yolks are the single-best source of choline. Liver isn’t too bad, either.

Carnosine acts as an antioxidant in the brain, trapping free radicals and lowering inflammation. We know from the omega-3 section that oxidative stress in the brain is linked to, and maybe necessary for, anxiety. Sure enough, there’s a carnosine supplement called chicken extract that can enhance mood and reduce anxiety, and speed up recovery from stress-related fatigue.

Carnosine comes in meat, any meat.

Zinc deficiency keeps showing up in people with anxiety, like Chinese males or Americans. This one always surprises me because oysters—the densest source of zinc on the planet—are such shut-ins. When the going gets rough, they really clam up. They practically live in a shell, they’re so anxious.

Is this just a correlation? Probably not. From a follow-up with the anxious Americans, increasing zinc intake to fix the deficiency helps resolve the anxiety.

In 1991, researchers split 50 Brits into two groups. One group received 100 mcg selenium each day, the other got a placebo. The subjects’ diets were used to estimate selenium intake. Those who started out with the lowest selenium intakes had the most anxiety, but 5 weeks of 100 mcg/day reduced it.

Selenium is easy to get if you know where to look. Brazil nuts, wild salmon, and pastured eggs are my favorite places to get it. A Brazil nut or two is plenty, if all you care about is the selenium.

Taurine is an amino acid we use to make GABA, the rest-and-relax neurotransmitter that inhibits the activity of the excitatory glutamate. People with anxiety tend to have lower levels of GABA, and both prescription anti-anxiety meds like Xanax and over-the-counter ones like scotch on the rocks act on the brain’s GABA receptors.

The best sources of taurine are animal foods, particularly beef and lamb hearts (lungs are actually somewhat higher in taurine, but they’re harder to procure and eat).

In official circles, antioxidant compounds—polyphenols, flavonoids, and other phytonutrients—aren’t considered essential. Soylent, the “perfect” human food replacement powder that optimizes your day so you don’t have to cook or spend more than a minute in the bathroom, omits them from their formula. I disagree. They are essential. They have been a constant presence in the human diet for hundreds of thousands of years. It’s only in the last hundred years or so that the rise of processed, refined, industrial food has allowed the widespread consumption of low-or-no-phytonutrient diets.

Consuming antioxidant compounds is the historical norm. Our bodies “expect” them. They improve our endogenous antioxidant defenses. They interact with our gut bacteria to form more potent and bioavailable antioxidant complexes. And they help protect us against the kind of oxidative stress that’s been implicated in anxiety disorders.

Zinc and magnesium work better against post-partum anxiety than either alone. Same goes for vitamin B6 and magnesium—combining the two does more to reduce PMS-related anxiety than just magnesium. This shouldn’t surprise you. Foods are what we eat, and many foods contain large whacks of multiple anxiety-relevant nutrients at once.

Consider spinach, with magnesium and antioxidants.

Consider any colorful plant food with a wide range of antioxidant compounds.

If these nutrient-anxiety relationships pan out, and I think they will, it’s easy to understand why almost 20% of American adults suffer from an anxiety disorder. People are eating less red meat, oysters are hard to open, and they’re still scared of egg yolks. And unless they’re eating at innovative (and expensive) restaurants, most people probably aren’t touching any liver. Potatoes and corn remain two of the most popular “vegetables” in the average diet, and people aren’t eating enough fatty fish.

Nutrient deficiencies aren’t everything. They probably aren’t the main determinant of anxiety. But they do matter. They’re low-hanging fruit—small changes you can make with major impacts.

I’m sure I’ll come back to this topic. Anxiety is a big issue with many causes. For now, though, it’s productive to explore the nutrient deficiency angle.

I’d love to hear from you, especially if you’ve dealt with anxiety.

What foods or nutrients have you used to help address anxiety? Do you notice any common triggers?