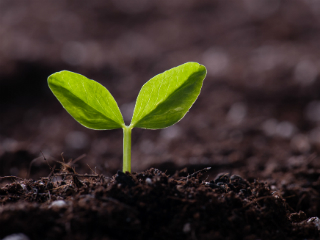 No, you yourself can’t save the world. You personally won’t make a dent in the climate, or the amount of plastic in the ocean, or the number of cute baby seals that are bludgeoned to death. But collectively, we can. The choices we make, the things we value, the food we eat, the way our food is raised, who we buy our food from, and how we conduct our day-to-day lives in attempted harmony with our Primal natures really does seem to mesh well with the environment. Multiply those small personal choices by millions of readers (and their dollars) and you get real change.

I’m not putting any extra pressure on you. These are things you’re already doing, by and large. These are the ways going Primal can actually help, not harm, the environment.

The popular arguments against the environmental merits of grass-fed beef are that it’s too inefficient. You simply can’t support enough animals on open grassland, certainly not enough to “feed the world.” Rotational grazing renders those arguments null and void. Here’s how it works:

You pack the animals close together on single paddocks. They graze intensively, not extensively. They eat everything on the paddock to which they’re confined, even the unpalatable but aggressive weeds, rather than range around nibbling their favorite foods all over.

After the paddock is clear, the animals move to the next one. They leave behind a wealth of nutrient-dense fertilizer that’s been stamped into the soil. Since the grass has been eaten, the roots die, decompose, and further enrich the soil.

By the time they circle back around to the original paddock, the grass has regrown and the soil is fully fertilized.

This isn’t a new way to feed herbivores. It’s how wild herbivores behave in natural settings. In the African savannah, zebras stick together to avoid big cats. In the Arctic, caribou gather in herds to avoid wolves. And the recent reintroduction of wolves into Yellowstone actually restored the environment by promoting a kind of “forced rotational grazing” in elk.

Holistic management of livestock through rotational grazing has a ton of evidence in its favor, and more and more of your favorite farmers are adopting it. There’s a decent chance the local grass-fed beef you buy at the farmer’s market was raised using rotational grazing. If so, you’re helping.

There’s a massive island of plastic out in the ocean. It may not be a literal island—a solid floating mass of congealed candy wrappers, ziploc bags, and milk cartons—but it’s arguably worse than that. It’s closer to an amorphous swirling vortex of microplastics slowly breaking down and showing up in the seafood you eat. Now, I’m all for the rise of a plastic-based marine society, sort of a Tupperware Atlantis with bitter sectarian violence between rival BPA and BPA-free factions. The sci-fi nerd in me would love that. But I’m also a seafood nerd. I want to standup paddle along the Malibu coast through clear clean seawater, not plastic saline syrup.

Luckily, you’re avoiding most of the packaged food responsible for polluting the oceans. Except if you buy produce from Trader Joe’s; I love the store but man, do they use a lot of plastic.

Local food doesn’t actually have much of a smaller carbon footprint. Not as a rule, anyway. Sure, your neighbor’s spinach was quite low input. The blood oranges you grab over the guy on the corner’s fence every time you walk the dog are very local and very good for the environment. The vast majority of produce’s carbon footprint takes place on the farm during production. The energy spent on seeding, growing, and harvesting. The application of pesticides. The day-to-day input that happens over the course of a growing season. The transportation from the farm to your hands accounts for less than 20% of the total carbon footprint.

However, organic food (particularly from smaller farms—the kind you usually get from the farmer’s market) can be more friendly to the environment. Organic farmers aren’t applying synthetic pesticides that run off and endanger wildlife. They’re producing fewer greenhouse gases. And if you wait for a few years for soil nutrition to recover, organic yield matches and sometimes even surpasses that of conventionally-grown crops.

Despite directly eating plenty of animals, folks on a Primal eating plan who eschew grains actually cause fewer animal deaths than grain-eaters. To get a few hundred pounds of cow meat, you kill one cow. It’s sad for the cow but actually saves more lives than you think. To get a few hundred pounds of wheat, you clear cut and plough the land to make room for the crop and destroy the habitats of resident wild animals, apply pesticides which poison surrounding wildlife, run a harvest combine that churns through dozens of rodents, rabbits, and reptiles unlucky-enough to be there that day, and set traps and use poison to keep rats and mice out of granaries. It’s estimated that grain agriculture kills 25 more sentient animals per kilogram of useable protein than beef agriculture in Australia, where beef is mostly range-grown.

Now, meat from industrially-raised livestock is not sustainable. I’m not arguing that.

This isn’t a staple of the Primal lifestyle. Not everyone does this. But I’d say, on the whole, that folks engaged with the movement are more likely to accept temperature extremes and use them as a “training” tool. Instead of blasting the heat once it hits 55 degrees (hey, I’m in Malibu here), they’re bearing the chill and calling it “cold exposure.” Instead of hunkering down inside with the AC blasting in summer, they head out for a picnic at the park under shade. To be short, you guys have grit, you’re willing to be a little chilly or sweaty, and the environment thanks you for it.

We use fewer electronics after dark

A growing aspect of the Primal lifestyle is honoring your circadian rhythm. That means more natural light during the day and less light at night. In an ideal world, it means spending more time outside during the day—thus using fewer lights–and turning off the electronics after dark. That’s not what always happens, of course. I get plenty of emails time stamped at 10 PM. But at least we’re aware of the problem and are taking baby steps to solve it.

We commune directly with nature

It’s hard not to love and protect a thing you fervently believe is essential for your health and happiness. I strongly believe that love makes a difference.

Simply going out into nature, buying annual passes to national parks, paying camping fees, and otherwise supporting the preservation of natural spaces with money and energy is good for the environment. It used to be that I’d go out to Yosemite or Joshua Tree or Zion and it’d be mostly Europeans on vacation with maybe the odd dread-locked trustafarian hitchiker. Now—and I mean in the last five years—I’m seeing way more Americans getting out and enjoying the incredible natural beauty our country has to offer. I’m not even rankled by the larger crowds in my favorite hiking spots because it means more people are taking advantage of this precious gift.

I don’t intend to make concrete connections between how much you weigh and your burden on the environment. But it’s clear that many of the things we hold dear contribute to a better world. And that’s the beauty of this Primal stuff: we’re not necessarily setting out to change the world. We’re eating holistically-grazed grass-fed beef because it’s more nutritious, tastes better, and gives animals a better life. We’re eating better and moving more to be healthier and happier, not because Al Gore told us to. We’re avoiding electronics after dark to preserve our circadian rhythm and improve our sleep, not cut back on electricity usage. We’re giving money to the parks because we love spending time in nature. In many respects, ours is a selfish devotion to preserving the beauty of the world. And that’s why it works so well, why it’s often more sustainable than people who do it to “be a good person” or “save the environment.”

Thanks for reading, everyone. Take care and drop a comment below if you have any further additions to the list!