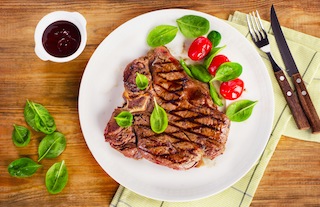 The popular story of how low-carb diets work goes something like this:

Reducing your carbohydrate intake lowers your insulin levels. Since insulin keeps fat locked into adipose tissue, lowering insulin can increase the amount of fat released to be burned for energy.

For the portion of the overweight/obese population with insulin resistance and chronically-elevated insulin levels, this is a fairly accurate description of why low-carb diets work so well. When you’re an insulin-resistant hyper responder in whom even a baked potato can cause elevated, protracted spikes in insulin that hamper fat-burning for long periods of time, or a person living under the backdrop of perpetually-elevated insulin, dropping the most insulinogenic foods can be your way out of obesity.

But that doesn’t explain everyone’s positive experience with low-carb diets. There are many other mechanisms by which low-carb diets exert their beneficial effects on bodyweight and body composition. Let’s take a look:

Increasing protein intake has many beneficial effects on health, particularly if you’re attempting to lose weight. Of all the macronutrients, protein increases satiation the most. This means a low-carb diet replete in protein can help control your appetite naturally. I wouldn’t say “effortlessly,” because deciding to eat more meat and fewer carbs technically requires executive functioning. But you’re no longer fighting your own body’s physiological desire for more food. You just don’t want anymore.

More protein also helps you retain, or even gain, lean mass during weight loss. Why does this matter? Because nobody’s trying to lose muscle, bone, or connective tissue when they lose weight. They want to lose body fat and keep or add muscle. Studies show that more protein in the diet consistently leads to greater retention of lean mass and more preferential burning of body fat during weight loss. For instance in weightlifters, a low-carb hypocaloric diet with 2x the RDA for protein resulted in greater nitrogen balance than a high-carb hypocaloric diet with RDA protein. In women, a low-calorie, high-protein diet was better than a conventional high-carb, low-fat diet at promoting lean mass retention, even in the absence of exercise. This increased lean mass also contributes to a greater resting energy expenditure, helping you burn more calories simply through daily existence.

Protein also has the highest thermic effect of all the macronutrients, meaning it takes the most calories to digest and further increases your energy expenditure.

In and of itself sugar isn’t “toxic.” It’s just pure energy absent any real micronutrition, and as long as you’re highly active and regularly clearing space in your glycogen stores for incoming glucose and fructose, a moderate amount is mostly harmless. Heck, I have a teaspoon in my coffee every day. In energy-replete humans—which is a significant portion of the population—excess sugar becomes deleterious. If the liver is full of glycogen, any fructose arriving there is converted to fat and contributes toward fatty liver or elevated blood lipids. If fatty liver progresses unchecked, this has terrible consequences for a person’s metabolic health, insulin sensitivity, glucose tolerance, and waistline.

Because sugar is the most obvious carb to remove from one’s diet, low-carb diets reduce sugar by default and minimize the possibility of fructose-induced metabolic dysfunction.

Glycogen is how we store sugar in the body, and our capacity is limited. Larger muscles can store more glycogen, but the average person can count on being able to store about 400 grams of carbs between skeletal muscle and liver glycogen. Walking around with your glycogen stores perpetually topped off means there’s nowhere for excess carbohydrate to go. You either burn it immediately or convert it into fat for storage in the liver.

Carb reduction drastically reduces glycogen. That’s part of the reason we initially lose so much water weight on low-carb diets; water always accompanies glycogen. Glycogen depletion is the “switch” for the brain and body to begin utilizing fat for energy. Given access to fast and easy glycogen, it’ll choose to burn that first. Take it away through glycogen depletion (via training, low-carb, or some combo of the two) and you have no choice but to feast on your own adipose tissue.

Everyone knows what “carbs” are. Potatoes, pasta, bread, soda, sweets, that sort of thing. It’s not hard to figure out. And it’s really hard to “hide” carbs like you can hide fat. Either the food is obviously starchy or obviously sweet, and you know to avoid it.

Low-carb is delicious. Eating steak, steamed broccoli with butter, and sautéed mushrooms doesn’t feel like dieting. It feels like cheating. Meanwhile, Weight Watchers, ultra-low fat diets, macrobiotic vegan diets—these are diets in the worst sense of the word. And you’ll never forget it when you’re on one.

You can certainly dig deeper into the minutiae, but the basic advice—eat fewer carbs, stop drinking soda, and pass on the donuts—gets most people most of the way.

Severely overweight person drops carbs, increases fat/protein, and quickly loses ten pounds in the first week. It’s a common occurrence. I’ve seen it happen, and it almost always turns the weight-loss recipient into a believer who adheres to the diet for the long haul. It doesn’t hurt that much of the early low-carb fat loss comes off the belly (the most conspicuous place for adipose tissue).

Like the best exercise regimen, the best diet is the one you’ll stick to—the one you’re excited about. Diets seem to fail so much in the literature because people can’t or won’t adhere to them. But those big early victories on the scale—even if it’s “just” water weight—and along the waistline motivate dieters to keep carbs down and keep losing body fat.

When you go low-carb, you ask for salad instead of the dinner roll. You load up on sautéed spinach instead of French fries. You eat kale chips instead of potato chips. These subtle alterations don’t just reduce the amount of carbs and calories you eat. They increase the density of micronutrients and phytochemicals you consume, many of which have favorable metabolic effects. There’s also evidence that increasing the micronutrient density of your diet can improve weight loss.

They eliminate the most fattening foods.

The most self-perpetuating macronutrient combo, the one you can’t stop eating, is fat plus carbs. Cheesecake? Tons of fat and tons of sugar. Potato chips? Fat and starch. Reducing carbs takes this combo out of the equation entirely. It’s much harder to overeat fat without carbs. And even if they mistakenly refer to high-fat-and-carb foods like chips and donuts as “carbs,” it doesn’t matter. They’re still eliminating the problematic foods that are the most obesogenic. A huge plate of fettucine alfredo probably has as much fat as carbohydrate, but “avoiding carbs” avoids the pasta just as well as “avoiding large boluses of carbs and fat in the same meal.”

Some would say that you could just as easily remove fat to make carbs less addictive. That’s true (although I’m not sure how “easily” that’s accomplished). But we’re talking about why low-carb diets work today.

That’s what I’ve got today. What about you guys? Why do low-carb diets work so well in your opinion?