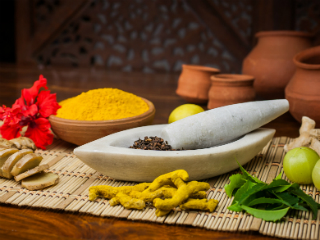 With so many time-tested treatment modalities out there, some which are thousands of years old, people are pretty curious as to whether some of the natural tips and recommendations penned in ancient literature are still effective today. Conventional medical wisdom assumes all that ancient medicine is just nonsense and superstition, that until a hundred years ago every health practitioner and patient lived under a massive collective delusion. If they got anything right it was through dumb luck, and today’s pharmaceutical companies have long since mined it for useful drugs and therapies. Could they all be useless? Whereas some older treatments have gone the way of the dodo in light of scientific scrutiny, many endure. In today’s post, I’ll subject the ancient world of Ayurvedic herbs to that same scientific scrutiny.

First transmitted through oral traditions and later through writings, Ayurveda dates back to at least 5000 BCE. That’s one long placebo effect. Let’s what the human studies have to say about some of these herbs.

Everyone and their vegan mother loves turmeric and knows how good it’s supposed to be for you. They may not be able to tell you what it actually does, but they know it’s good. Ayurveda knows, though. They’ve known for thousands of years that it’s anti-inflammatory enough to sometimes replace pain meds. It can reduce depression symptoms, even in patients with major clinical depression. It shows neuroprotective efficacy against animal models of Alzheimer’s disease, epilepsy, other major neurological disorders, and arthritis. And it’s delicious. Pair with black pepper to make it even more effective.

The grandfather of Ayurvedic herbs, ashwagandha promotes a healthy response to stress. Stress is a major problem in the modern world. Everyone agrees. The big problem isn’t the thing causing the stress but how we respond to it. You can try reframing stress in your mind or learning to be less judgmental and reactionary and more present. You can also take the grandfather of Ayurvedic herbs, ashwagandha. Ashwagandha is an adaptogen, meaning it promotes a healthy stress response. Stress happens and you can’t avoid it. Ayurveda acknowledges this and offers ashwagandha as an ally to handle it. Whether it’s the negative impact on fertility and sex hormone production, the response to resistance training, or the spike in cortisol and anxiety, ashwagandha helps reduce the negative effects of stress on our health and happiness. It basically makes oxidative stress less bad.

Bacopa monnieri enjoys attention from the techie crowd for its beneficial and considerable effects on memory, but they weren’t the first to discover its nootropic qualities; for thousands of years Ayurvedic healers have been prescribing it for improved mental health and cognition. Whether you’re a senior citizen suffering from memory impairment, an older person who’s otherwise healthy, or even a young adult with no complaints, bacopa monnieri can increase your focus and working memory.

Make pesto from this and someone’s liable to get lucky, at least according to traditional Ayurvedic herbalists who used holy basil as a powerful aphrodisiac. In rabbits, holy basil is a potent testosterone booster (while decreasing sperm count). In humans, the sexual effects haven’t been tested or confirmed. What have been confirmed are the boosts to immune function and blood glucose control and reductions in anxiety and depressive symptoms.

That said, a friend of mine swears by holy basil for testosterone and libido boosting. Here’s how he takes it:

Bring all three ingredients to a simmer for five minutes, cover, and let sit for another 5. Strain out the leaves and drink.

Tribulus terrestris has gained notoriety among bodybuilders for its apparent ability to increase testosterone. Actually, though, the evidence for a T effect in humans is nonexistent. It does seem to boost erection rigidity and sexual well being, possibly by increasing androgen receptor density and thus androgen activity in the brain.

Gotu Kola sounds like a weird Pepsi knock-off, but it’s a potent herb with strong evidence for efficacy against a number of conditions. First and foremost, gotu kola is a must-try for patients with chronic venous insufficiency. The herb improves the swelling, microcirculation problems, and blood flow issues that accompany CVI. It may also increase alertness in older adults, reduce anxiety, and induce calmness in the face of acoustic surprises or jump scares (so take it before a scary movie and appear extra tough).

Some actually classify Boswella serrata as a “phytopharmaceutical,” it’s so effective against inflammation, particularly joint inflammation. In osteoarthritis of the knee, Boswellia serrata reduces joint stiffness and pain and improves all other symptoms. In a placebo controlled trial of asthmatic patients, taking boswellia serrata for 6 weeks reduced symptoms. There’s even a single case study of a woman who eliminated a brain tumor that had spread from her breast using just Boswellia serrata.

Not to be confused with regular old (but still awesome) cumin, black cumin is more medicinal than culinary. It’s a broad-spectrum antimicrobial, effective even against antibiotic resistant bacteria. According to a review on its pharmacological effects, black cumin may improve hemoglobin levels, increase respiration, lower blood pressure, and improve lipids. It’s also been shown to reduce inflammation. In obese men, black cumin had remarkable benefits to subjective well-being that were not seen in the placebo group, including the elimination of complaints of hunger, fatigue, sleeplessness, forgetfulness, poor libido, pain, and general weakness. Another placebo-controlled study found that black cumin seed oil was effective against rheumatoid arthritis.

The effects of individual herbs are compelling enough, but Ayurveda traditionally prescribes combinations of herbs that ostensibly have synergistic effects. When subjected to clinical trials, many of these combinations show efficacy against conditions like Alzheimer’s dementia, knee osteoarthritis (some may even reduce cartilage degradation), rheumatoid arthritis, and excess inflammation. Not bad, eh?

That’s just a small taste of the more notable Ayurvedic herbs. Covering the many dozens more (and the hundreds of permutations of each) is beyond the scope of this post. But these are some of the highlights.

What about you guys? Any experience (for better or worse) with Ayurvedic herbs? Let me know in the comments below.

Turmeric: A Spice for Life

How Often Should I Supplement with Turmeric? Diastasis Recti: What To Know