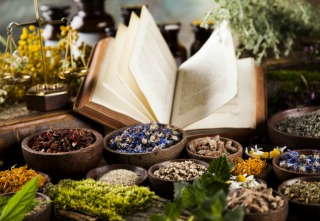 Here at Mark’s Daily Apple, I avoid writing off anything without first investigating it. I keep one foot in the “alternative” health world and one in the “conventional” realm, making sure to maintain a skeptical—but openminded—stance on everything. There’s no other way to do it, if you’re honest. At least as far as I can tell.

No, not every alternative therapy works. A lot of it is pure hogwash. But whether we’re talking about off-label uses of conventional drugs and illegal drugs, natural pharmacological agents, or downright outlandish-sounding interventions, some therapies are worth considering. Not trying, necessarily. Considering.

Without further ado, let’s take a look at some of them:

The standard treatment for serious depression is the antidepressant. For years, researchers have been trotting out studies which pit curcumin—the primary phytonutrient in the spice turmeric—against conventional antidepressants or placebos.

To their credit, doctors are quick to recommend exercise for the treatment of “physical” ailments like osteoporosis, obesity, diabetes, heart disease, arthritis, sarcopenia. It works, and it’s obvious and broadly accepted that it works. But evidence is emerging that exercise can also be an effective primary therapy for depression.

It’s especially good for people who don’t respond to SSRIs. In one study, 30% of folks whose depression did not respond to antidepressants experienced complete remission using exercise. In another, exercise improved self-rated sleep quality in depressed patients.

Psychedelics for Depression, Addiction, and Anxiety

Turn on, tune in, drop out… of your addiction, intractable depression, and crippling anxiety? Maybe.

In patients with terminal cancer, a single dose of psilocbyin (compound in “magic mushrooms”) abolished depression and anxiety. That’s “end of life” anxiety and depression, by the way—the realest stuff around. Other studies have similar results.

Ketamine is a powerful sedative that in smaller doses produces psychedelic effects. More recently, it’s emerged as a rapid antidepressant, with single doses abolishing drug-resistant depression within 24 hours and lasting up to three weeks.

Ibogaine is an African psychedelic whose characteristics make it untenable for recreation but promising for addiction therapy. It’s been used to produce remission of severe opioid addiction. It’s effective against alcoholism and nicotine addiction, and it shows promise against methamphetamine addiction.

It goes without saying that these are all powerful substances that also happen to be illegal in most places. Exercise caution. Several ibogaine clinics are doing good work in Mexico, so that’s an option.

Shining infrared light on your bum knee and expecting anything to happen sounds ridiculous, right? Well…

There are other effects, too.

A friend of mine’s father passed from cancer a decade back. While the cancer ultimately did him in, one of the severest blows occurred when he picked up a nasty case of antibiotic-resistant C. diff in the hospital on a routine check with the oncologist. He was stuck there for weeks. Nothing worked. There’s no question he lost several months or years from dealing with the ramifications of constant watery diarrhea and poor sleep (from being woken up by his rumbling stomach).

I wish I knew about fecal transplants back then, because they are the single most effective (and in many cases, only) way to treat drug-resistant C. diff infections.

Modern sterility, medicine, and hygiene have eliminated helminths, yet our immune systems, which evolved in the presence of these parasites, expect them. There’s good evidence that our immune systems are “overactive” without a parasite load to attack, and this has given rise to the increase in asthma, allergies, intestinal diseases, celiac, and even multiple sclerosis.

Helminthic therapy—literally giving yourself worms—sounds gross, but it really does seem to help people deal with some of these conditions.

Strolling along a wooded path sure is pleasant, but evidence out of Japan—where forest walks known as “forest bathing” are a cornerstone of modern medicine—shows that it can treat disease and ill health. It lowers stress and reduces cortisol, improves blood glucose control (compared to the same amount of walking in a city setting), reduces blood pressure, and increases the activity of cancer-fighting natural killer cells. What’s best of all? Many of these effects last for weeks after a single visit.

But don’t just go once a month. Go as often as possible. Get your green space (even if you’re not sick).

Low-Dose Naltrexone for Seemingly Everything

As the immune system and inflammation both play major roles in seemingly every health condition, low-dose naltrexone is also being explored by clinicians in many other fields, including fertility and autoimmune diseases.

That’s it for today, folks. I’d love to hear from you.

What alternative therapies are you curious about? Which ones have you used? Are there any you’d like me to explore further?