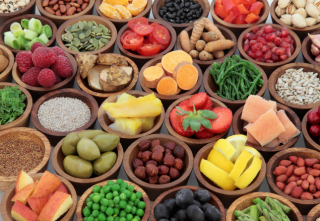 Everyone reading this knows about the macronutrients. You’re all eating enough protein, fat, carbs, and the various sub-categories, like fiber, omega-3s, MUFAs, SFAs, linoleic acid, and so on. You know the major micronutrients, like magnesium, calcium, vitamin B12, and most of the minor (but still vital) ones, like plant polyphenols, iodine, and vitamin K2. Today I’ll be talking about the truly obscure nutrients. The ones health food hipsters were super into like, five years ago (“I’m taking beta-1,3-glucan, you probably haven’t heard of it, there’s only one group at Hokkaido University doing any research, you can only get it off the DarkNet using bitcoins”). The ones Grok was super into like, 50,000 years ago.

What are they, what do they do for us, and, if they’re so great, how did Grok obtain them?

Beta-glucans are fibrous carbohydrates that make up the cell walls of certain organisms. They’re found in oats, yeasts, and—most relevant to you—mushrooms. Rather than just provide colonic bulk or prebiotic substrate, what makes beta-glucans so uniquely attractive is their ability to modulate the immune system.

Given to critically-ill patients on enteral feeding, they reduced CRP and improved immune function.

They may improve the immune system’s ability to fight tumors.

According to a recent survey of wild and cultivated mushrooms, both types contain appreciable levels of beta-glucans. Were our hunter-gatherer ancestors eating mushrooms? Almost certainly. Recent research into dental residues found that Neanderthals living in Spain ate gray shag mushrooms. They may even have used mushrooms for their medicinal properties, as gray shag contains an antimicrobial protein.

One of the hardest words in the English language to type, phosphatidylserine is probably my favorite stress-fighter. The body doesn’t make much of it and stress depletes what little we have. PS works on both mental and physical stress, improving mood and blunting cortisol after physical exercise. (And, yes, it’s why I include PS in Primal Calm.) Older folks in particular seem to benefit from PS, enjoying boosts to memory and cognitive function. Kids with ADHD show better attention when given PS, especially paired with fish oil.

After refined soy lecithin, an industrial product Grok never would have had access to, the best source of PS is ruminant brain. If that sounds like an arcane, unrealistic food source, guess again. Before we were top hunters, we scavenged. We ate the stuff the top carnivores couldn’t, like load-bearing bones and heads, both of which we’d shatter with rocks to obtain the marrow and brains inside. After brain, which is no longer available due to Mad Cow disease worries, the best sources are cold water mackerel, herring, and chicken hearts. A 100 gram (3.5 oz) serving of any of them will give you between 400-700 mg of PS, which matches or exceeds the dosages used in the studies.

High dose inositol can reduce anxiety, even comparing favorably with some pharmaceuticals. It can also reduce insulin resistance and improve fertility in women with PCOS.

If you’ve got the right gut bacteria—and since Grok spent his entire life immersed in a decidedly un-sterile world of dirt and bugs and animal guts, he likely did—you can even convert phytic acid into inositol. Or, rather, they can. That means nuts and seeds effectively become good sources of inositol, provided you train your gut bacteria to make the conversion.

Carnosine is woefully underrated. Found abundantly in meat, it’s a combo of the amino acids beta-alanine and histidine. We can synthesize it in our bodies, but in-house synthesis isn’t always up to par. And if it is, adequate isn’t always optimal.

High levels of carnosine are linked to muscle endurance and it acts as an antioxidant in the brain. There’s something called chicken extract that can enhance mood and reduce anxiety, and speed up recovery from stress-related fatigue, and it’s basically a carnosine supplement.

There’s some evidence that taking beta-alanine as a precursor is more effective at increasing muscle carnosine content than taking carnosine itself. We can absorb carnosine, but it doesn’t seem to increase serum levels. Beta-alanine is one of the fitness supplements with the most support in the literature. If you can get past the pins and needles feeling it provokes, beta-alanine can provide:

Either way, you could just eat meat, the ultimate source of both beta-alanine and pre-formed carnosine. People with a history of athletics have higher muscle carnosine levels than non athletes, and researchers suspect this might be due to the former’s higher meat intakes.

ALA is created in the mitochondria (especially liver mitochondria) to assist in the creation of various mitochondrial enzymes and Acetyl-COA, which we need to metabolize fats, protein, and carbohydrates. In short, we use ALA to produce cellular energy and maintain cellular function. It’s extremely important.

Yes, we make it. We can still use some extra, some of us more than others.

Diabetics: ALA has also been shown to prevent the descent from glucose intolerance into full-blown type 2 diabetes and increase insulin sensitivity in type 2 diabetics. It may even reduce diabetic neuropathic pain.

Kidney has between 3-4 mcg of ALA for every gram. Liver, around 1-2 mcg/g and beef heart, about 1 mcg/g. Spinach, tomato, and broccoli are the best sources of ALA in the vegetable kingdom. If you try to get ALA through food, you’re looking at a dose far smaller than you’d get through supplementation, and far smaller than the doses used in research. Then again, the amount of oxidative stress we face as modern humans is unprecedented, whether it’s from the diets we eat, the psychological stress we undergo, the exercise we don’t get, the lack of sleep, the absence of meaning, the loneliness, the disjointed manner in which so many of us lead our lives. Hunter-gatherers by and large didn’t have these problems. They had other problems, more immediate ones. But they weren’t bogged down by the chronic oxidative stress that requires supplementation.

You’ve probably noticed that the research I cite to support the importance of these obscure nutrients almost always uses supplemental doses unachievable through natural sources. Does this mean we can’t benefit from taking them?

Our hunter-gatherer ancestors ate a wider variety of plants, all wild. Wild plants are exposed to more environmental stressors than domesticated plants. To stay robust and survive, the wild plants produce higher levels of polyphenols. They were effectively consuming superfoods in every bite. Supplements can play that role.

Our ancestors lived lives punctuated by short bouts of extreme stress. If they survived, they were more resistant to future stressors, with less inflammation. We don’t have that. We have chronic stress that breaks us down, makes us more vulnerable to future stressors, with more inflammation. If we want similar stress resistance, we must manufacture it and then make sure we get ample recovery time, all while getting a handle on the chronic stress. Supplements can help with that.

Our ancestors likely didn’t deal with the kind of existential crises and psychosocial stress we embroil ourselves in. They break us down and deplete reserves of critical nutrients required for stress resistance. Supplements can replenish them.

If I’ve done my job, you’ll be rushing out in the next few hours to grab chicken hearts, kidneys, almonds and Brazil nuts from the grocery store and forage for mushrooms out in the woods. Right?

What are your favorite nutrients that few people know about (or ones you’d like me to write about in the future)? What vitamin, mineral, or phytonutrient were you taking before it was cool? Take care.