3 Common Types of Headache (and How to Treat Them Naturally) 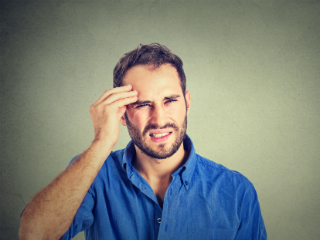 One major downside to having these big prominent heads stuffed with consciousness-spawning brain matter is that they sometimes ache. Nobody likes a headache. You can find fetishists who enjoy pinching, slapping, biting, burning and any matter of objectively painful stimuli. But there aren’t “headache fetishists.” No one’s chugging a 32 ounce Slurpee in search of brain freeze, or getting drunk for the hangover.

The difficult thing about headaches is figuring out why they’re occurring. Pain in other areas is different. You can look at your hand if it’s hurting and figure out why. You can see the cut on your knee and know what’s going on. But you are your head, and the headache is inside. Your consciousness sits behind your eyes observing reality and directing your role in it. It’s all a big mystery. Or so it feels.

That doesn’t mean we’re helpless. There are many effective ways to manage, treat, and even blunt the painful effects of headaches.

There are different types of headaches. To fix them, you’ll need to first understand which type of headache currently affects you.

The three main ones are migraines, cluster headaches, and tension headaches.

These guys are serious business. I’ve been lucky enough not to suffer from them, but I have several friends who do.

Some migraines come with “auras.” In aura migraines, sufferers are struck with alterations to consciousness that serve as a “warning” of the impending migraine: an odd smell in the air, swirling colors, bright lights, confusing thought patterns. Auras can occur a few seconds to a couple hours in advance. They usually but not always subside once the actual migraine hits.

Migraines affect more boys than girls, and more women than men. They also run in families, suggesting a hereditary component.

Magnesium: The evidence is quite clear in 2016. Magnesium matters for (many) migraine sufferers.

Just don’t forget the dual nature of red meat. Red meat may help your migraine, improve your body composition, boost your performance in the gym, increase bone mineral density, and help your grandma’s brain work better, but it’s going to kill you!

Triggers: Every migraine sufferer I know has a food, smell, or chemical compound that triggers them. For some, it’s bad Chinese food (maybe the MSG?). For others, it’s red wine, or aged cheeses, dairy in general, gluten, fast food, or even red meat (in which case disregard the previous section). According to Chris Kresser, the most common triggers are foods containing histamine, tyramine, or arginine. They’re not all foods and drinks, either. They can be common household chemicals and perfumes. Some people report EMF as a trigger. Even particularly powerful emotions, stressful situations, and other non-corporeal phenomena can be triggers for some people.

Supplementation: It is a must-try. The previously-mentioned are all important nutrients with a high safety profile; there’s no reason not to give them a shot, and they’ll probably help. A recent study gave a proprietary magnesium, riboflavin, and CoQ10 supplement to migraine sufferers. The supplement was a huge success, reducing symptom severity and duration.

Cluster headaches are probably the most painful type of headache, but they don’t last as long as a typical migraine. They hit one side of the head, usually centralized around the eye, and come in waves or “clusters.”

Psychedelics: Although rigorous trials are lacking. a number of surveys and case studies indicate that the classical psychedelics psilocybin (found in magic mushrooms) and LSD (AKA acid) may alleviate and reduce the severity of cluster headaches. In one, authors interviewed people who had treated their own cluster headaches with either LSD or psilocybin, finding the vast majority had derived major benefits from their experimentation. In a more recent survey of cluster headache sufferers, psilocybin, LSD, and LSA (a close relative of LSD with similar effects and mechanisms) appeared to be just as efficacious as conventional medicines, and often more so. That said, going on a trip (of the non-plane, train or automobile variety) to cure cluster headaches probably isn’t for most folks. So read on.

Circadian hygiene: For decades, researchers have found many examples of circadian misalignment in patients suffering from cluster headaches.

Melatonin supplementation (10mg in the evening in one study) seems to help. I’d imagine that getting more natural light during the day and less artificial light at night will also help.

Tension headaches are the most common type and have many different causes, some physical, some psychological. Women are more likely than men to get tension headaches.

Vitamin D/Sun: There’s a fairly consistent relationship between latitude and headache occurrence. The further away you are from the equator, the less sun and the more headache. This probably holds true for migraine as well.

Massage: Effective massage for headaches can be as simple as rubbing your own temples until the headache diminishes. It can be more complicated, employing trigger point therapy. Maybe it’s Thai massage. Maybe it’s just your significant other rubbing your neck and head while you watch Netflix together. Perhaps the most reliable way to alleviate a tension headache with massage is to focus on the suboccipital muscles along the base of your skull.

You don’t necessarily need a massage therapist every time. Touch heals, and healers needn’t be experts.

Chiropractic: Spinal manipulation may help some tension headaches, particularly combined with massage. It improves range of motion along the cervical spine, which should also help prevent future headaches.

Exercise: Getting your neck stronger can reduce headaches.

Trigger point therapy: Mentioned earlier, tension headache sufferers tend to have tender trigger points along the trapezius (“shrugging muscles”), sternocleidomastoid (muscles running from the breastbone past the collarbone to the back of your head; controls head turning), and temporalis (big muscles alongside the head that control chewing) muscles.

Relax: Whatever relaxes you, go do it; stress is a consistent factor in the development of tension headaches. Fight it. Rethink it. Redirect it.

That’s all I’ve got, folks. What about you? How do you deal with headaches? What’s worked? What hasn’t?