25 Ways to Improve Your Insulin Sensitivity 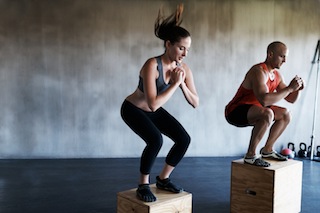 But insulin has other effects, like inhibiting the breakdown of body fat into free fatty acids for energy production. Although locking fatty acids into body fat sounds terrible, it isn’t evidence of insulin being malicious. Lipolysis is temporarily blunted so that we can burn or sequester the glucose coming in. Once the glucose is handled, lipolysis resumes. We oscillate between fat burning and glucose burning, seamlessly switching fuel sources when needed. Sure, we’re not burning any fat when insulin is elevated, but once our insulin levels normalize we’ll be back on track. When you’re insulin sensitive, this is pretty much how it works. You secrete enough insulin to get the job done, but not so much that you gain weight and stop burning fat.

Lifting heavy things, particularly with great intensity, improves insulin sensitivity by an interesting mechanism: non-insulin dependent glucose uptake happens immediately after the workout, which allows your muscles to replenish glycogen without insulin. According to some researchers, “the effect of exercise is similar to the action of insulin on glucose uptake.” I’d say not having to secrete any insulin makes you effectively insulin-sensitive.

An overloaded, energy-replete cell is an insulin resistant cell. An empty, “starving” cell is an insulin sensitive cell. Any exercise that burns glycogen and leaves your muscles empty and gaping for more will necessarily increase insulin sensitivity. I can’t think of a faster way to burn through your glycogen than with a high intensity interval training session. Hill sprints or rower sprints are sufficiently intense and comprehensive.

Glycogen depletion occurs locally: high rep leg presses will deplete leg muscle glycogen, but they won’t touch glycogen in your arms, chest, and back. To fully deplete all the glycogen, you need to do full-body movements. CrossFit WODs and other similar metcon workouts that have you doing pullups, squats, sprints, pushups, box jumps, and other compound movements — at high volume, in the same workout, and with minimal rest—will drain your glycogen stores and reduce the amount of insulin you need to replenish them.

A recent study found that altitude hiking at 4500 meters improved glucose tolerance and insulin sensitivity. This isn’t feasible for everyone (4500 meters is really quite high, and not everyone lives near a suitable mountain), and some people just aren’t ready to climb a mountain and hike around (in the study, some participants with low DHEA-S levels didn’t get the benefits), but it’s one way to improve it. Just google around to see if any local hikes reach those heights.

While training of any kind promotes better insulin sensitivity, training in the fasted state enhances this effect. One study found that relatively high-intensity “cardio” performed while fasted increased subjects’ insulin sensitivity beyond the group who did the same training after a carb meal, even in the context of a normally obesogenic high-fat, high-carb diet.

As you know from reading this blog, a simple walk can be quite powerful, particularly if you string them together to form a daily walking habit. A walk is good for glucose control after meals, but regular walking can have impressive effects on insulin sensitivity. Whether it’s obese Japanese men or obese women, making walking a regular occurrence will help.

9. Sprinkle some vinegar on your food.

Huh? Isn’t low-carb the greatest and most effective path to insulin sensitivity? Partly because it’s often the easiest way to lose weight, low-carb eating can and usually does improve insulin sensitivity. But when you go very low carb, low enough to start relying primarily on ketones and free fatty acids for energy, your peripheral tissues enter an insulin-resistant state to preserve glucose for the parts of the brain that require it. This is normal, and as long as you don’t try to eat a high-fat, high-carb diet, this physiological insulin resistance should pose no harm.

Maybe it’s the quieting of the sympathetic nervous system, the “flight or flight” stress pathway. Maybe brief glimpses of bodhi reduce the amount of insulin required to dispose of glucose. Whatever’s going on, meditation improves insulin sensitivity. Well, successful meditation. I’ve never had much luck with it.

Okay, so maybe the researchers didn’t prescribe bear hugs to improve insulin sensitivity in overweight subjects. Maybe they used intranasal oxytocin. But oxytocin is what we secrete in response to positive social interactions like sex, good conversation, dinner parties, breastfeeding, and yes, hugs.

21. Cook with ginger and garlic.

23. Get some vitamin K2 through food or supplements.

Some would say “reduce all sugar intake.” That’s a mistake, because it eliminates many colorful fruits and berries, most of which either have a neutral or beneficial effect on insulin sensitivity. But by most accounts, eating excessive amounts of refined sugar (and perhaps even moderate amounts) can reduce insulin sensitivity. And “excessive” is relative, of course. Highly active individuals with room to spare in their glycogen compartments have more leeway. I still do sugar in my coffee, and I’ll have a bite or two of dessert if someone else orders it at dinner.

25. Eat liver and oysters once a week.

Now, this isn’t an exhaustive list. There are probably other ways to improve insulin sensitivity outlined in the literature, and still others yet to be discovered. But this is a good start that should keep you busy for a good long while.